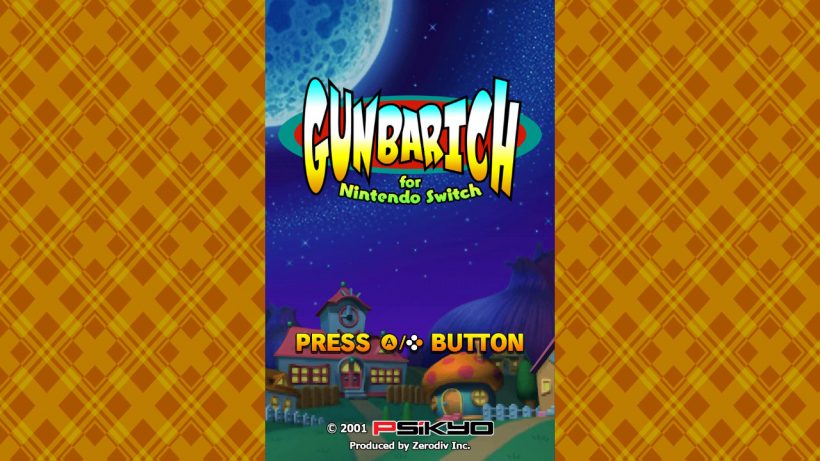 GUNBARICH started life as one of many arcade games developed by now-defunct, Japanese video game company, Psikyo. A developer known for its vertically scrolling shoot ‘em ups, Psikyo released GUNBARICH in 2001, bringing with it a similar, yet also very different style of play. The result was a shooter/pinball mash-up in that classic, vertical presentation, and now the game has released on Nintendo Switch. Is it worth your money though? Let’s find out.

The plot behind GUNBARICH is a loose one and, as is often the case with games like this, is completely unnecessary. You are supposedly training to become a magician by showing your worth through various stages of pinball – a literal Pinball Wizard if you will. Over the course of the game you will play through seven worlds, each containing three levels (with a fourth being added to the final world). The first two levels of each world are based on the classic pinball style with the third always being a boss stage.

The goal of the main levels is to simply break all of the blocks at the top of the screen. You do this with a ball that pings around, kept alive by your paddle at the bottom of the screen. Your paddle has two small flippers that can be used to push the ball in a certain direction and with much more power than simply letting the ball bounce off your paddle. The controls are extremely simple – the left control stick, or D-Pad if you prefer, is used to move your paddle left and right, with the (A) button being used to swing open your flippers. You can also choose between two different characters: Marion and Grutan, who supposedly offer slightly different control stats which alter how the paddle handles, although I personally didn’t notice much (if any) difference between the two. 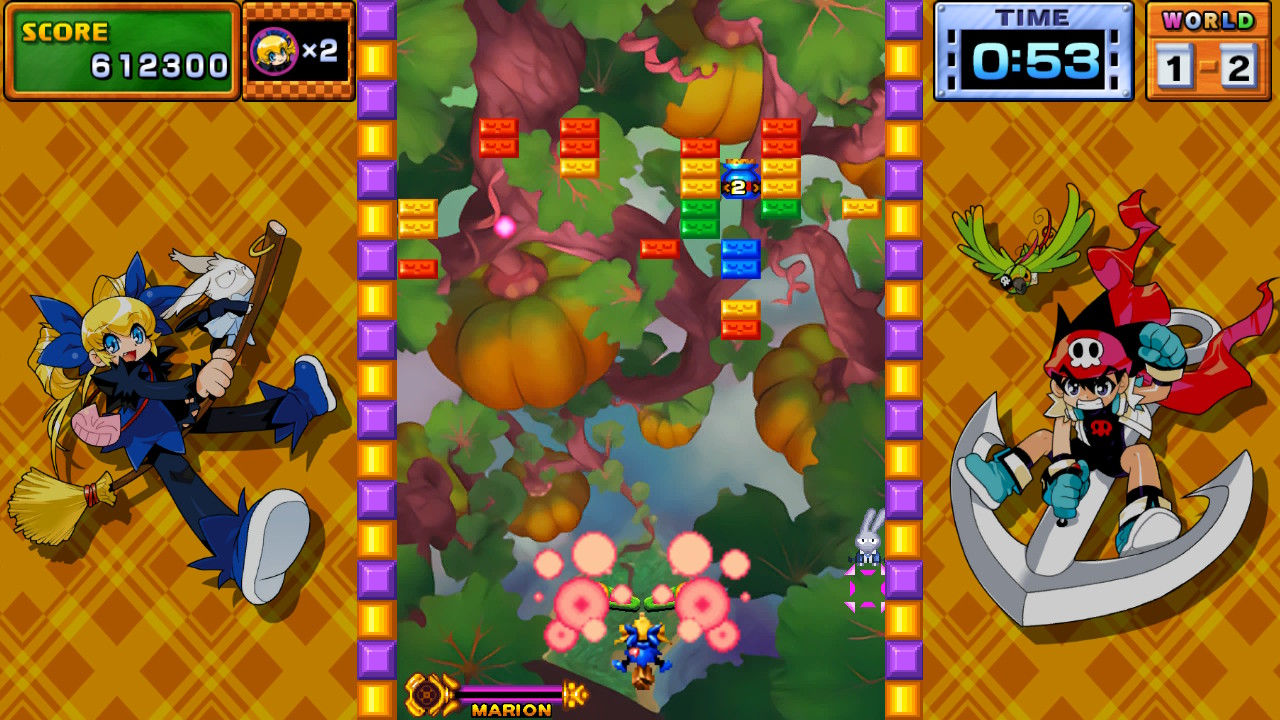 Stages also contain items to hit such as treasure chests that will give large boosts to your high-score, and enemies that get progressively trickier from World 2 onwards. Some of these enemies fire larger balls back at you which can leave you paralyzed if you are unable to deal with it quickly, and in one of the strangest decisions in video game history, one of these enemies is Santa Claus (yes, really). You are able to bat the balls back at enemies with your flippers, or dodge them and wait for them to disappear but hitting them back is definitely the safest way to go. The stages get more complex with each world – new enemies, unbreakable blocks that get in the way, and even switches that interfere with where your ball can travel all come in to play as the game progresses.

This is the first real issue for GUNBARICH though: the difficulty. The game is tough (really, really tough) and in some places is relentlessly unforgiving. The first few worlds will be fine for most players after a little practice but World 4 and onwards prove to be a real challenge. The game acknowledges this in its settings, with the option to alter how many lives you are allowed, as well as the amount of ‘continues’ you are able to make use of. You are able to give yourself up to nine lives (originally this is set to three) and an unlimited amount of continues (which of course means that you will definitely be able to see the game through to the end), although each time you use a continue your score is reset to almost zero. High-score chasers will therefore want to master the game without using many of these.

Something that will help with the difficulty slightly – although definitely not enough – is the power-up options. At various times throughout each level, power-ups will drop and grant you with a special ability should you touch it with your paddle. These include things such as widening your paddle, powering up the ball to break more blocks than usual, and perhaps the best of all; the ‘Multi’. This power-up multiplies your regular ball into several balls that scatter around the screen, eliminating many of the required blocks in one go. Luckily, the ball you usually play with is pink whilst these new ones are blue; this allows you to keep an eye on which one to keep safe as a priority.

This leads me on to the overall presentation, however, which unfortunately becomes the game’s second real issue. The screen is utterly wild; there is simply too much going on at the top of the screen with the ball whizzing around and bright colours everywhere. This means that it is far too easy to lose track of where the ball is. Visibility is slightly better in Handheld mode as opposed to playing docked (likely because you can hold the screen right up to your face), but even then you’ll often lose sight of it. The translations from Japanese are also rather terrible at times, resulting in an overall lack of quality in how the game presents itself. In a nice touch though, you do have the option to play the game vertically by flipping the console onto its side in Tabletop mode thanks to an option in the menus rotating the screen. It’s not enough to save its flaws, but it will appeal to fans of the classic arcades. 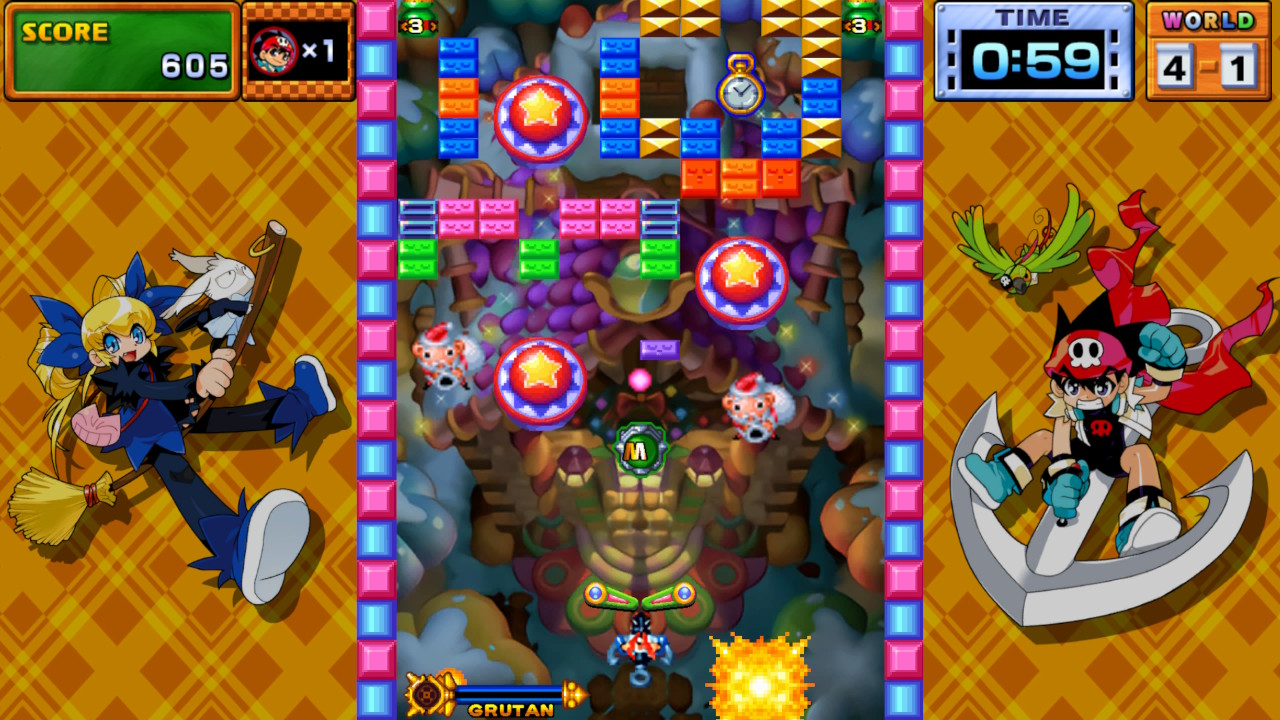 Ultimately then, GUNBARICH just isn’t fun enough to justify a solid recommendation. The punishing difficulty means that most players will only be able to reach the end by allowing themselves lots of continues; dying their way through each stage for 45 minutes before being underwhelmed by the ending. Of course, the nature of games such as this is high-score chasing, and whilst some players may get a kick out of squeezing out new scores, there are better games available for the console to do just that. Too short, too difficult and too messy; the decent pinball mechanics and nice boss designs are not enough to save GUNBARICH. Maybe steer clear of this one.

With some decent pinball gameplay at its core and the addition of a rotated view in Tabletop mode allowing that classic feel of a vertical arcade game, GUNBARICH could have been an interesting title for the Switch. Unfortunately, it is far too hard to complete on its original settings, leaving most players to ultimately get rid of the ‘lives’ and ‘continues’ system, instead dying over and over again until they reach the end. Adding an overly congested screen into the mix on top of this results in a game that is hard to recommend.