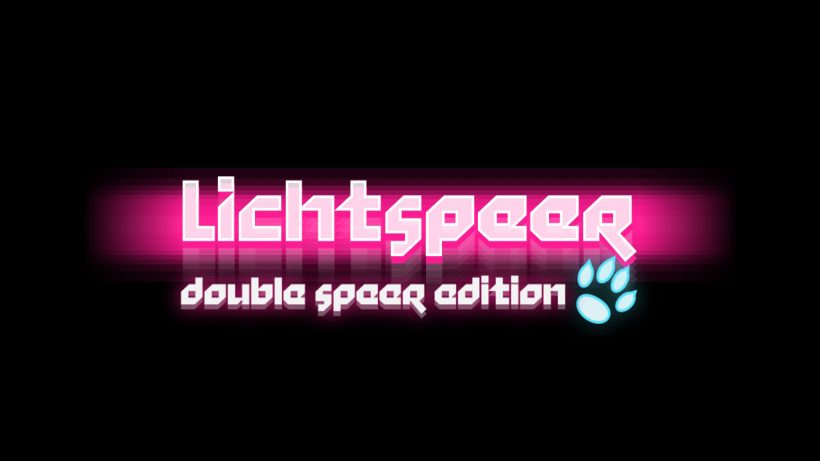 The game begins with you receiving the ‘Lichtspeer’ – a legendary weapon that you will need to use in battle for the amusement of a god who apparently has nothing better to do. Soon you’ll find yourself entering the first of the game’s 13 levels with your new trusty spear in hand. It is a simple affair in theory – enemies approach you from one side of the screen and you have to throw your spear at them to kill them before they reach you. Holding down either the (A) or [ZR] button will charge your spear, with a simple release of that button allowing the spear to be thrown through the air. The left control stick is used to move your aim up or down – you can see roughly where your spear will go thanks to an arrow which shows the arc of the spear’s flight. It basically works in a similar way to Angry Birds, except this game has a lot less birds and whole lot more of people getting skewered in the face. 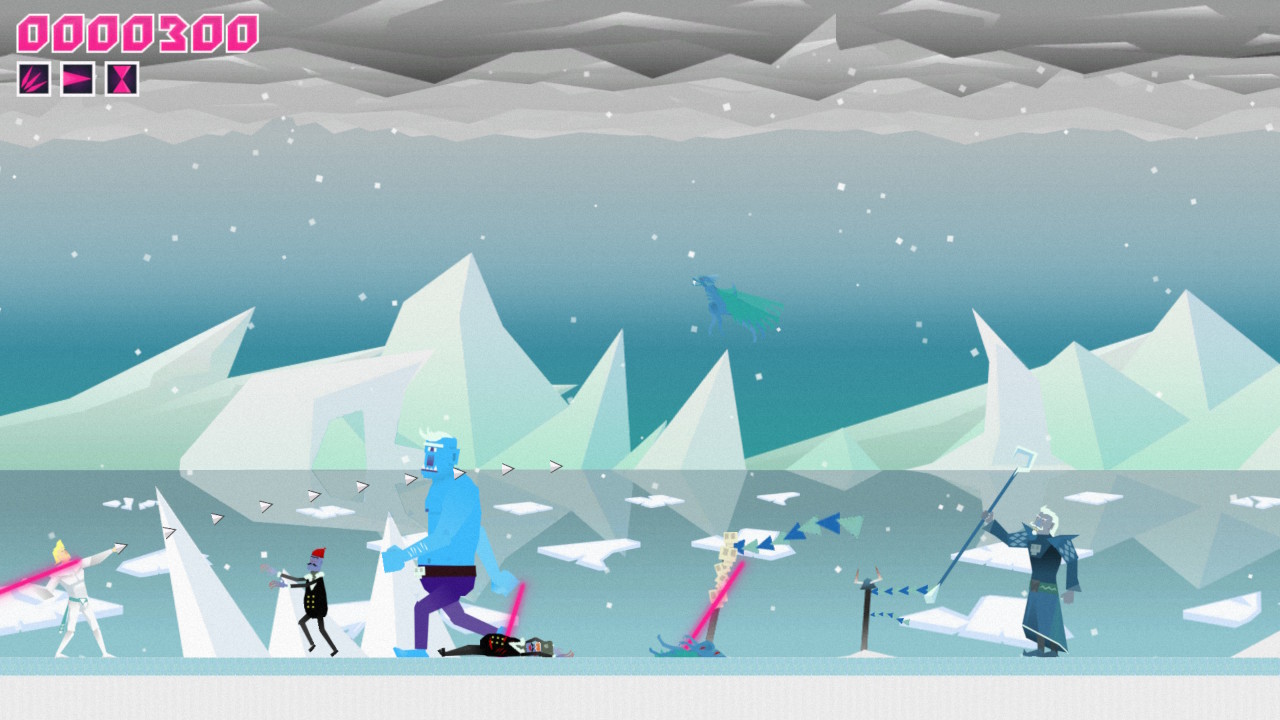 The entire game is made up of this one type of gameplay; you enter a level, work your way through waves of enemies until you reach a checkpoint, and keep doing this until you reach the end of the level to then move on to the next. Luckily, there are some ways in which the game changes things up a bit. Firstly, some stages have boss fights at the end which usually see you throwing your spear in slightly more inventive ways – these can be almost unfairly difficult, however, which I’ll talk more about soon. Secondly, whilst most areas within levels see you standing on the left hand side of the screen with enemies approaching from the right, sometimes you’ll find yourself on the opposite side instead which somehow throws out your sense of aim. Sometimes you’ll even be in the middle of the screen with enemies approaching from either side, on a diagonal slant, or with enemies coming towards you from both the floor and a raised platform.

On top of this there is a skill tree system. Beating each level (and completing optional missions within them) will reward you with ‘LSD’ which, of course, stands for ‘Lichtspeer Standard Denominations’, not whatever you were thinking. With your ‘LSD’, you can enter the game’s shop to upgrade your abilities; these are things such as weapon upgrades, including the ability to split your spear throw into three or five spears for better accuracy, or defence upgrades such as shields against enemies. These upgrades all have three levels of power and you have to pay for them each individually, building up their strength.

You’ll definitely want to spend as much of your currency as possible because Lichtspeer is almost too happy to overwhelm you with enemies and kill you whenever it has the chance. For the most part, the game’s ordinary levels increase in difficulty at a steady pace; they do get scarily tough towards the end at times, however, and you’ll find yourself dying many times over. The main issue with the game’s difficulty, though, is the boss battles as I mentioned briefly earlier. Whilst some boss battles are relatively straight forward and challenge you just enough, others are just brutal; needing absolute precision with every single spear throw having to hit tiny, exposed targets without fail. Some bosses will kill you in one shot if you miss just one very precise spear throw, and considering these can be five to ten-minute fights, this is rather punishing. The difference in gameplay is refreshing, but the sudden spike in difficulty is off-putting in a way that makes you want to give up rather than persist.

If you enjoy constant death, pain, and sadness though, you are in luck! After completing the main game players are treated to two new modes: ‘New Game+’ and ‘Rage Quit’. These offer an even higher level of difficulty as you might expect – ‘New Game+’ increases the amount of enemies you’ll face, making things much more difficult and ‘Rage Quit’ mode is perhaps the most appropriately named mode in gaming history. Of course, thanks to how far you will have advanced through your skill tree by this point there is hope for extremely skilful players, but if you’re anything other than a spear-throwing professional these modes likely won’t be for you. 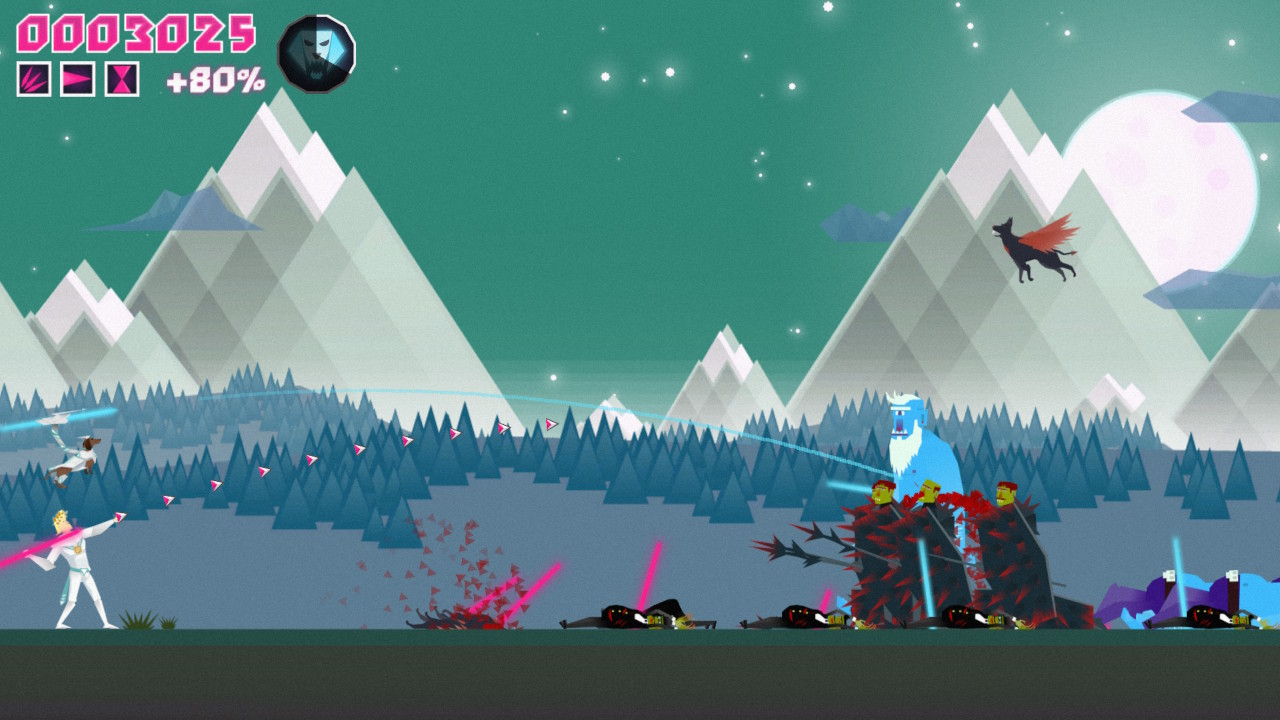 Exclusive to the Nintendo Switch version of the game is a co-op mode which is perhaps a saving grace for those who may struggle. A second player can join in to control the most elegant, levitating dog your eyes will ever see. The dog has a spear of its own, allowing you both to team up to take on the waves of enemies together. He also has his own special power which charges up throughout your playing time – when used, this can obliterate every enemy on screen. This feature has been added really nicely, with the ability to switch back and forth between solo and co-op at any time from the level select screen.

Overall, Lichtspeer is a fun game; the spear throwing gameplay is satisfying when you are playing well and the enemies (whilst mostly being variants of each other from previous levels) contain some nice designs. Ever wanted to throw a spear through the head of a fez-wearing walrus riding a skateboard? No? Well you can now! The issues lie in its pesky difficulty spikes and its repetition; some boss fights will annoy an awful lot of players and others may find that after a while it feels like you’re just doing the same thing over and over again. The game can be reasonably entertaining on your own, but the Switch exclusive co-op mode adds a bit more fun and could well be the main reason to give the game a chance.

Lichtspeer: Double Speer Edition is bonkers (in a good way), has a nice core gameplay mechanic and boasts a nice aesthetic style, but ultimately suffers from cruel difficulty spikes and repetition. Fans of seriously challenging gameplay will get some enjoyment from this, and with a fair amount of time and patience, others will find their way to the credits too. If you have a willing friend, co-op gameplay is definitely recommended!