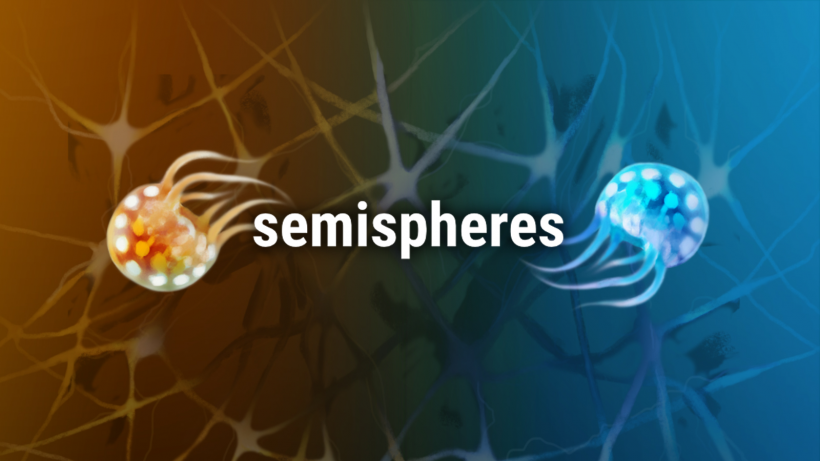 Semispheres is an interesting little concept involving two spheres needing to navigate their way through a level to an end portal. The caveat being that the spheres are separated into 2 sides of the screen and the puzzles come from using the spheres to interact with the other side and open up a path to the end goal. These interactions take the form of power-ups you’ll be able to collect, which range from simple distraction noises that attract the attention of enemies or being able to open up a portal to the other side.

It might seem a little complicated but, to the credit of this game, these features and powers are introduced gradually at a pace that is very player friendly – you’ll have plenty of time to get your head around a power-up before the game throws anything new at you. My only gripe here is that the game fails to tell you how each power-up works before you use it. Thankfully, experimentation is encouraged and you very quickly figure out any new features the game introduces. 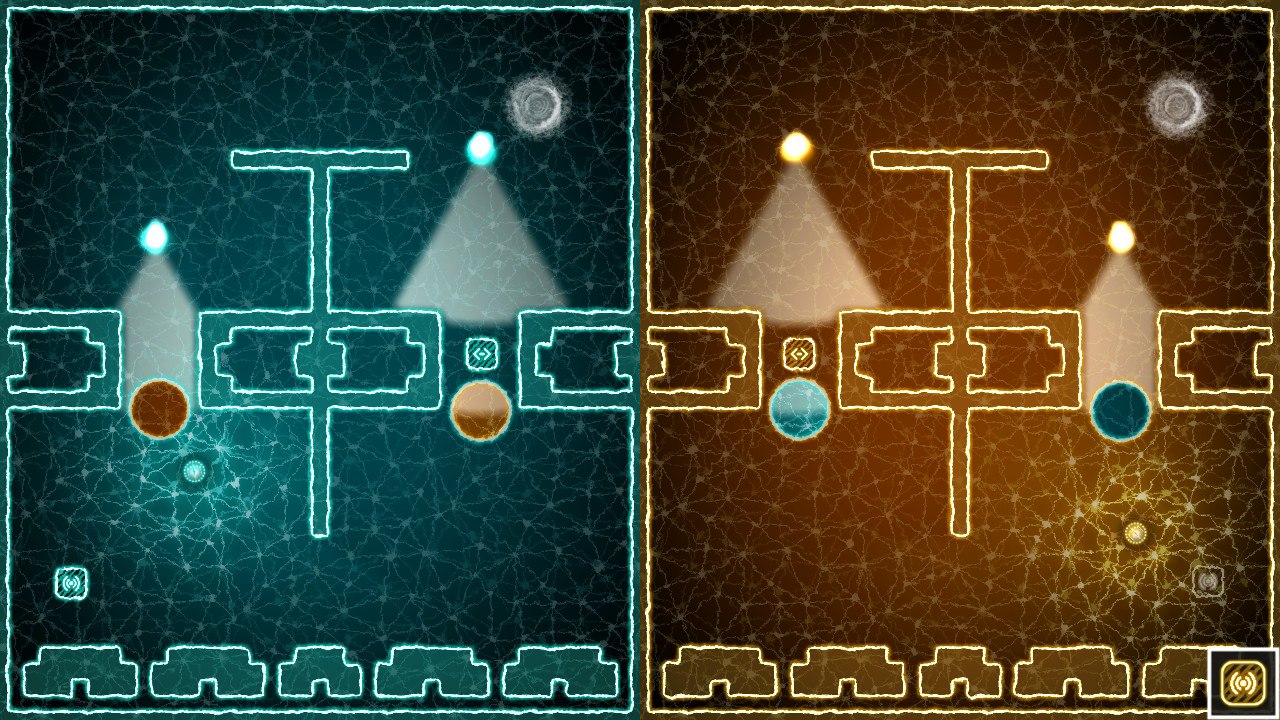 Circling back to the power-ups on offer, the game does a good job of providing a variety of powers that all work in sufficiently different ways that they all feel useful. For example, later on, you’ll be able to use a power that transports your sphere over to the other side. Using this power-up to navigate around enemies feels just as valid as being able to open up a window on the other side where you can distract enemies and temporarily open up a path. Obviously, each level has its own solution so you won’t be experimenting with powers, the challenge is in figuring out how to use the toolset available.

On the whole, the game doesn’t require much in the way of dexterity – the controls are really simple. Each Joycon controls one of the spheres, the stick moves you around and the shoulder button uses whatever power-up you have picked up. It’s nice and easy to pick up and play and, as a bonus, the control scheme means you can separate the Joycons and play the game co-op if you so wished. 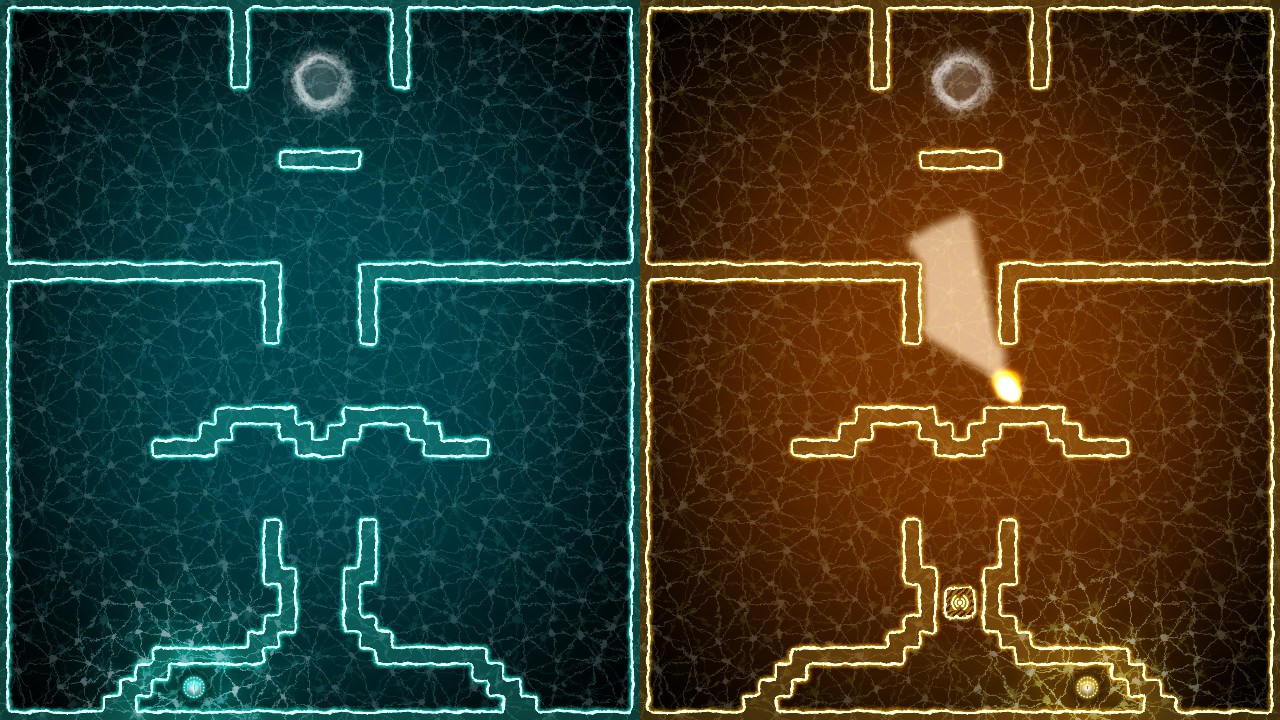 However, when playing solo, there are a few levels (and I stress there’s only a few) that require some hand-eye coordination skills as you navigate both spheres simultaneously with a degree of accuracy. Whilst not the most challenging gaming experience you’ll ever face it’s a weird change of challenge and can be a little jarring when you fail a level purely because old lefty is completely inept at moving up while your right hand is managing just fine.

Puzzle games live and die by their ability to not frustrate players whilst also providing them with enough mental challenge that the puzzles feel satisfying. Semispheres struggles to strike this balance at first with much of the game feeling too easy. Most of the solutions are straightforward and it’s unlikely you’ll be stumped for too long. The late game manages to throw more complex ideas as the arsenal of power-ups increases but by this time the game is close to finishing and you don’t get to enjoy the real challenge for too long.

Speaking of the game, it is relatively short and you can expect to beat it in a single evening. It’s a shame the game doesn’t get to explore more complex puzzles but at the same time the game doesn’t overstay its welcome and moves at a fast pace throughout. Each chapter consists of five levels, and usually each chapter will explore a new power-up and allows you to get to grips with it before moving on. The puzzles themselves can be just a couple minutes long at times depending on how obvious the solution is. As such the game moves quickly and helps keep this feeling of progress. 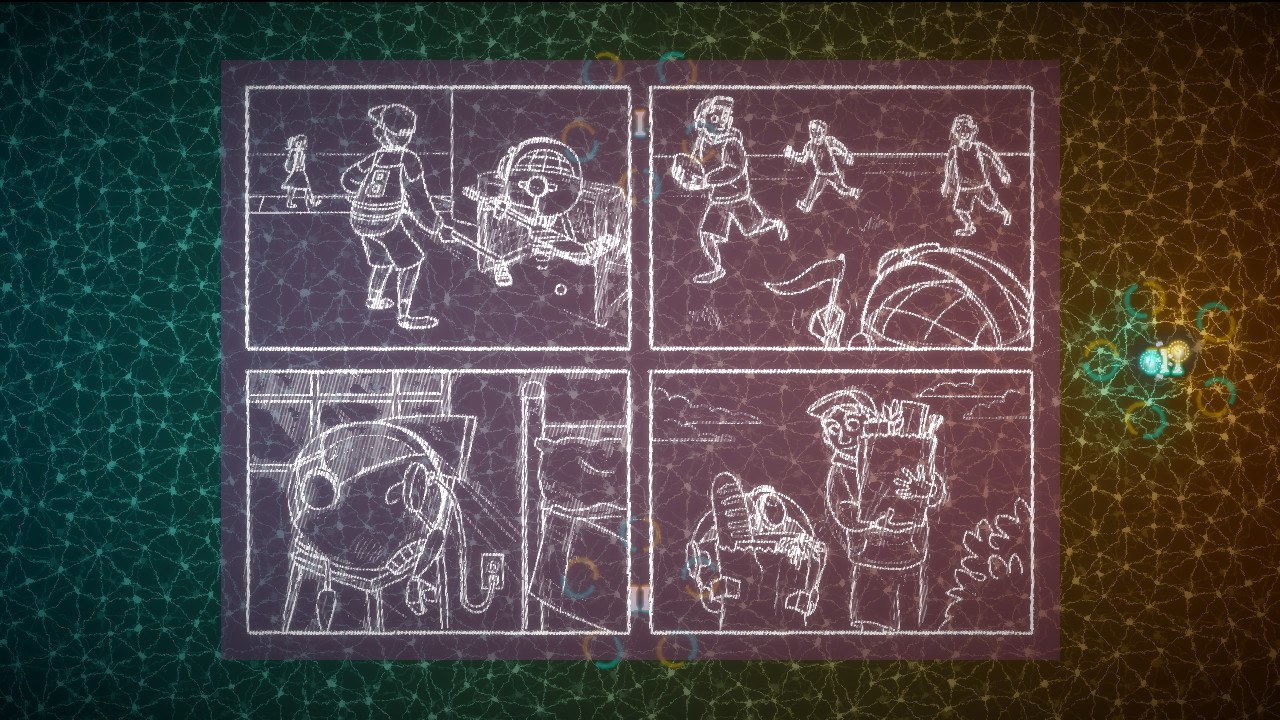 Finally, the presentation here is about what you’d expect from an indie puzzle title. The art is simple but effective, ensuring that all the relevant points are colour coded to help identify which sphere they’ll affect in-game. The icons for power-ups are always clear enough that you’re never in doubt what you’re picking up. In between each chapter you’ll also get a brief comic strip that forms the only story this game has. It’s completely unrelated to the game you’re playing – think of it as a little bonus for progressing. All in all it’s what you’d expect, nothing wrong, and nothing amazing.

Semispheres is a pretty standard puzzle game, it has some nice concepts but fails to really elaborate on them enough to build a more compelling experience. The game is a good way to spend an evening if you prefer to relax and stroll through some straightforward puzzles, so for those with a cerebral itch, Semispheres is a decent if forgettable experience.