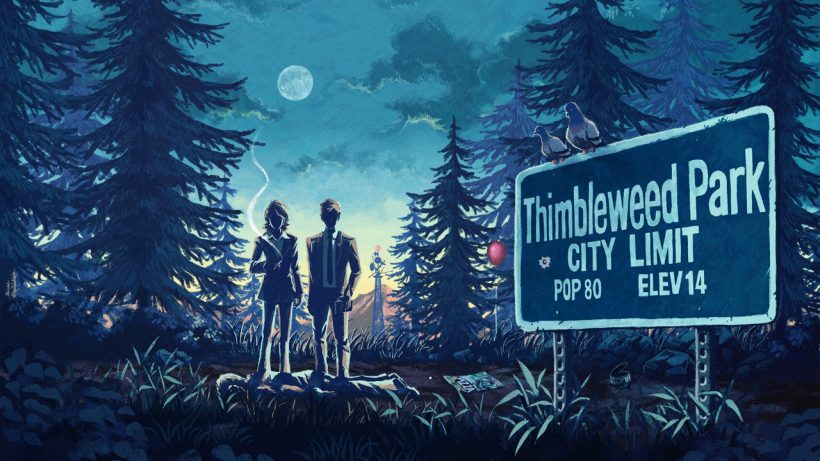 Thimbleweed Park was born thanks to a (very) successful Kickstarter campaign back in 2014. Designed by Ron Gilbert and Gary Winnick, the title is actually a spiritual successor to previous games made by the duo – Maniac Mansion, and The Secret of Monkey Island – which were released in 1987 and 1990 respectively. The nods are obvious – the graphics and gameplay are reminiscent of games of this time – and whilst I never had the chance to play those games myself, a quick look online will tell you that players are falling head-over-heels with nostalgia. So far, so good, then.

The game is a point-and-click adventure which follows the stories of five characters in a place called (you guessed it) ‘Thimbleweed Park’. A murder has taken place by a river with the body left lying face-down on the floor and so two detectives arrive in town to investigate. Alongside these two detectives, you’ll also take the role of Delores (an aspiring games developer), Franklin (Delores’ father and extremely shy business man), and Ransome The *Beep*ing Clown (a clown who has been cursed to never remove his make-up). An odd cast, then. In fact, the whole town is utterly bizarre – the murder is perhaps one of the most normal things about it. 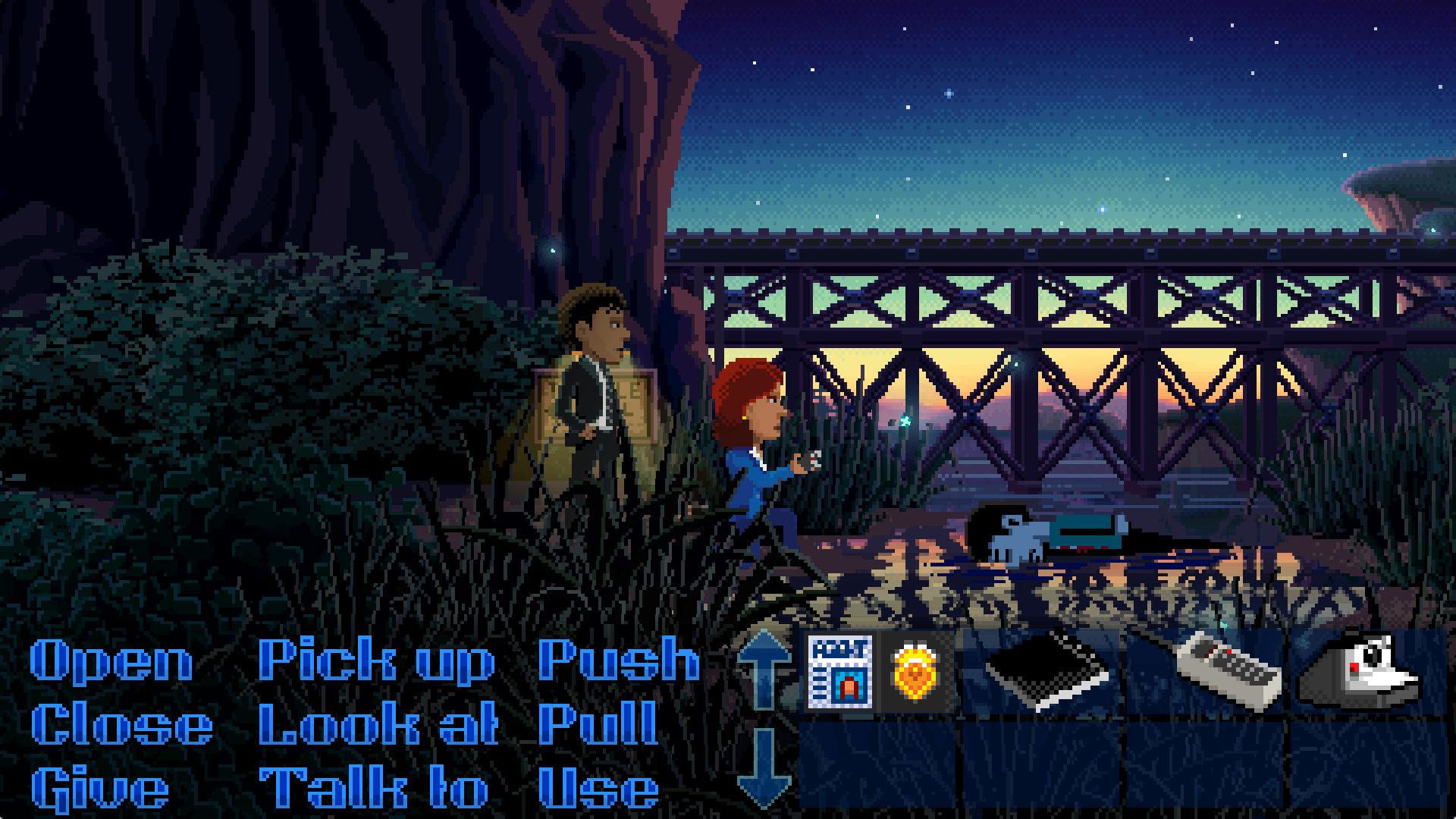 Whilst travelling around as these characters you are presented with a menu of actions; ‘Open’, ‘Look at’, ‘Pick up’, and ‘Give’ for example, and have an inventory of items that you collect along the way. The general idea is to look at absolutely everything by clicking it on-screen, pick up everything that you can get your hands on, and then use these items, logic, and your memory to solve puzzles and uncover what on Earth is going on. You also have the ability to switch between the different characters that you have come across – sometimes this is crucial to solving particular puzzles and using one character to help another can be extremely satisfying.

Thimbleweed Park is full of humour, sometimes breaking the fourth wall by having characters explain that items “look like they’re from a point-and-click” game for example. If you haven’t already noticed, the town is crazy, and this includes the entire cast of characters as well. Senior Agent Ray, in particular, has some wonderful lines throughout the game, and all of this combined with small references to a variety of different things (especially the society and culture of the time the game is set) is sure to make you chuckle.

Perhaps the thing that surprised me the most about this game is its length. There are two difficulty settings – ‘Casual’ and ‘Hard’, but the added difficulty presented in Hard mode is actually just more puzzles and therefore the need for a high level of persistence. The Casual version of the game takes out some of the puzzles, theoretically making the experience easier for beginners to the genre who might struggle to keep going. At its easiest – and if you just rush through the entire thing – you’ll likely find yourself seeing the credits after around 10 hours or so. If you take everything in and really let yourself be absorbed into the world, however, (and especially if you’re playing on hard), you’ll go well over 20 hours, maybe even 30.

Personally, as someone who doesn’t play many point-and-click adventures, I must admit that I got confused frequently, often for quite a while. Luckily, at (almost) any time you can use an in-game phone to get hints by dialling ‘4468’. Players with lots of experience with the genre may well breeze through the majority of puzzles but for everyone else this is a really handy feature. The game can be pretty tough but thanks to this method you never quite reach the point of thinking “this is just impossible”. There were times when I found myself wanting a break, annoyed at not knowing what to do, but I always eventually found my way, even if it took me longer than I would have liked. 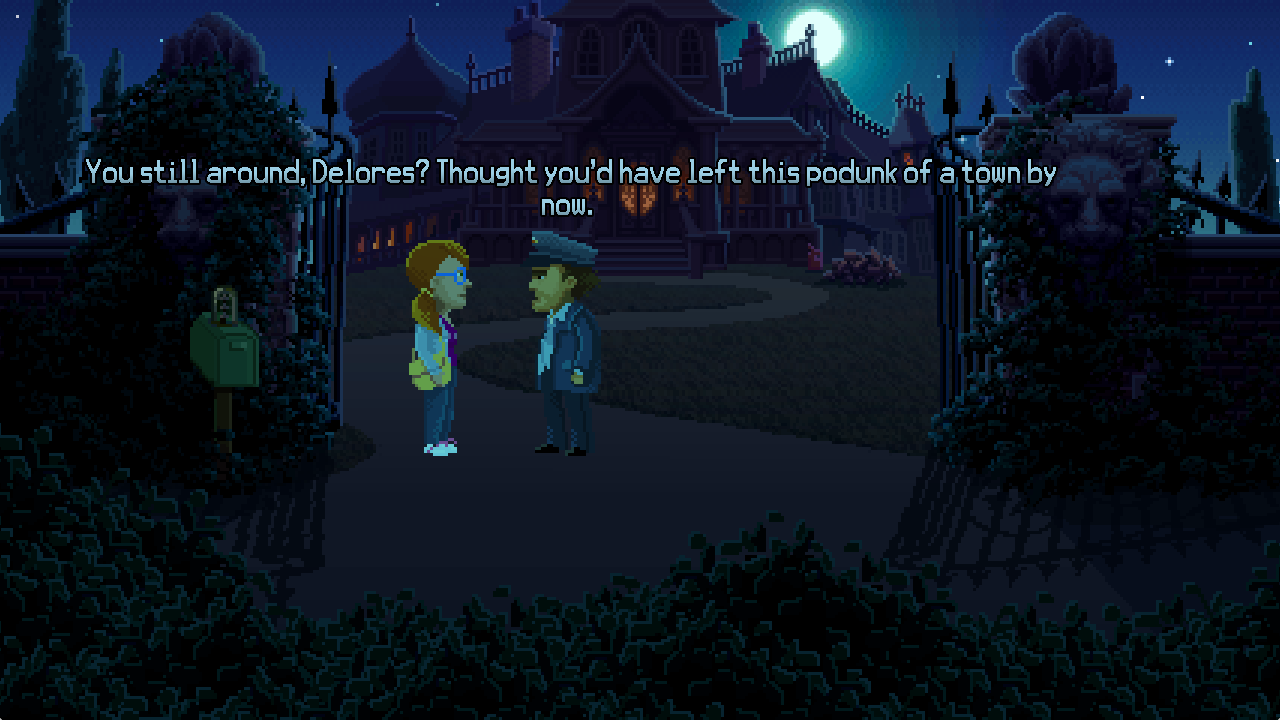 The game can be played on the TV; the left control stick can be used to move a cursor around and a combination of buttons will cycle through the on-screen actions, but Handheld is easily the better play-style. This way you are able to just tap anything and everything with your finger effortlessly – just as the game would play on a PC. This works a treat for the most part, although occasionally I would find myself going through doors when I actually intended to stroll right past them as finger-taps can be used for very similar actions.

To summarise, then; a wonderful cast of characters, bucket-loads of nostalgia, and an utterly bizarre, ‘twisty-turny’ storyline make Thimbleweed Park a must for fans of the genre. It has to be noted that for players who aren’t as used to point-and-click games, the difficulty of the puzzles can feel very slightly overwhelming, especially if you are used to the more modern approach to games design that favours easy-to-follow, linear storylines. Everything about the game is very nicely put together, though, and after 20 or so hours in Thimbleweed Park it will start to feel like home. If you feel up to the challenge, grab yourself a one-way ticket.

Thimbleweed Park is a beautifully crafted, if challenging world to explore. The puzzles you face can be daunting at times and may put some people off, but players who are able to be patient (or use the in-game hints when possible) should find it to be an enjoyable ride. Fans of the genre and of the game’s predecessors will no doubt love everything on offer here and, with 20-30 hours worth of content for those willing to fully explore, there is quite a lot to love.