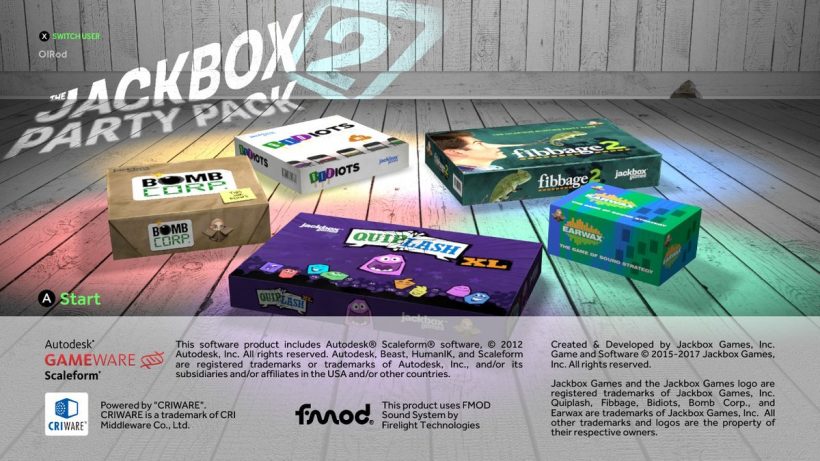 Released on the same day as the first iteration, the second Jackbox Party Pack has one killer game to have it stand out as the better of the two.

Think of the Captain Toad minigames in Super Mario 3D World which spawned a much-loved game of their own a few years ago. That’s what we have here with Bomb Corp, which is full of charm, humour and tough-to-solve riddles done under pressure. More on that later.

The developers obviously knew that Fibbage was the best that the first Pack had to offer, because it’s back for more in the second Pack in the form of Fibbage 2. Also in the second bundle of ‘fun’ is Earwax, which puts sounds to the forefront and has you choosing from sound effects to decide which best represent a given prompt. It’s another one which doesn’t make a ton of sense. And it goes on, and on, and on. It’s never a good sign when you become desperate for a round to end, particularly in a party game.

Bidiots is a little better. This one has you drawing art as a group, before players attempt to bid ridiculous amounts for your ‘masterpieces’. It’s more of the same from Drawful in the first game – you get tips from the computer on how best to deliver your works of art, but the auction part is definitely the most fun, and tense.

Quiplash XL brings more of the Use Your Words formula into action once again, with everyone presented with different questions from which they have to come up with the cleverest and/or funniest response, with other players then voting on which they think is better. There’s not much more to say about it beyond that; it’s as good as each player involved is prepared to make it.

But every other game in both Packs is blown away, so to speak, by the excellent Bomb Corp. Presented with 8-bit stye graphics, the visual style just adds to the hilariousness of the dialogue here. The humour is nailed on the head, and the mode can be played in either a story mode or a challenge mode, both with just a single player and with a group; although it’s arguably easier on your own. Basically, you play as one of the interns at a bomb factory, and for some unbeknown reason, there are bombs riddled all over the place set to go off and obliterate the entire workforce at any moment. You have to defuse them by cutting the correct wires, which are determined by a series of clues, some of which contradict each other. So you won’t be able to cut any wires at all until you’ve read all of the information on each card.

The inclusion of Bomb Corp is enough to make Jackbox Party Pack 2 the pick of the first two games. It’s good enough to spawn its own spin-off series; the characters are likeable, the writing and comedy timing is impeccable, and the brilliant problem-solving, quick-thinking and teamwork elements of the puzzles is addictive. Hopefully we’ll be seeing a lot more of the office staff working at Bomb Corp in the future.

You can see the Jackbox Party Packs doing well over the next few months, especially as people start looking for new and exciting ways to entertain guests at festive parties. What Pack 2 has in its favour is Bomb Corp – it’s the game most likely to keep players coming even on their own later on after the season is over. That being said, the rest of the package offers lighthearted fun in varying levels, given you make the best of them. Your enjoyment will depend on your imagination, humour and drawing skills, and also your ability to stomach some painful attempts at humour in-between the game rounds themselves.

If you only have the money for one of the Jackbox Party Packs, go for this one. There’s fun to be had in short bursts if you can gather some friends together. However, other than Bomb Corp, there’s nothing here that you’d want to sit around playing for hours. It’s great fun in the smallest of blasts, but like most in the genre, the more people you have who are able to take part, it’s likely that you’ll have more fun with the games.