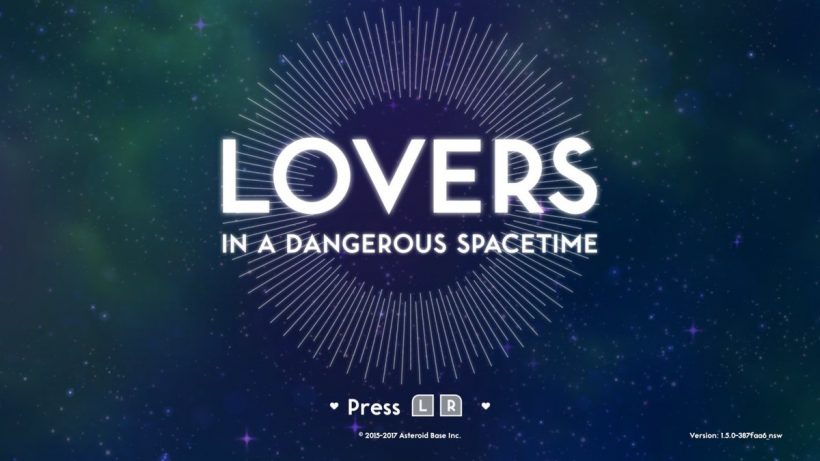 Anyone who’s a big fan of tower defence games – this reviewer spent weeks enjoying Starship Patrol on DSiWare before the service was discontinued last year – will be hoping for a great representative of the genre to join the Switch eShop offering line-up. Lovers in a Dangerous Spacetime could prove to be the game to fill that gap.

Anti-love creatures are threatening the amorous universe to set the scene for where the game’s action will unfold. You need to pick from a range of loved-up characters to set off into space and fight off the lovelorners.

The game blends your traditional tower defence with a space-exploration type adventure, and has you traversing a map in search of caged space-bunnies – which you need to free in order for the end goal to open up. You have a set number of them which you need to collect as a minimum, but levels will feature excess bunnies which can add bonuses to your score at the end of each level.

The genre combination works, and it really feels like you’re playing two games at once. It’s easy to have your eyes zone in on what’s going on inside your spaceship where, if you’re playing as a single player, you’ll have a small CPU animal at your beck and call which you can command to operate the shields and guns as you crack on with other tasks, most likely steering, elsewhere on the ship. The CPU are pretty smart, and will take out enemies which can’t even be seen on the screen.

Where Lovers in a Dangerous Spacetime comes into its own, however, is in multiplayer co-op. In the latter stages, things become far too heated to be able to stick with one player steering and the other legging it around the ship firing the guns and operating the shields. So you’ll have players bumping into each other and frantically calling out instructions as you try to fend off 360 degrees worth of enemy forces. Using the max of four players does make things a little easier in terms of having your angles covered, but you’ll still need to move around the ship a bit to make use of all the controls. In addition to the shooters and shields, there’s a portal which allows you to access a map of the level, as well as a lethal rapid-fire weapon which fires automatically but has a limited charge.

Gameplay sometimes strays from the ‘collect five bunnies to advance’ formula. Some stages will have you trying to survive against a number of rounds of enemies, for example. Every now and then you’ll have the opportunity to power up your ship with add-ons including laser beams and a spiked ball and chain.

The difficulty level zips up rather quickly – after a short tutorial level, you’ll get a few stages into the first world before noticing a step up. The enemy numbers suddenly become rather unforgiving, and you’ll rapidly need to consider abandoning the simplistic tactic of steering while someone else takes the responsibility of firing and defending. Fortunately, there are multiple difficulty selections to choose from, so don’t worry too much about not being able to see the game’s later stages.

Fortunately, the controls do handle smoothly though – you have a wide axis to fire off shots from each of your gun ports, and mastering steering isn’t too tough. Visually things are simple but bright, and the game certainly has a sense of identity from its art style. It’s like a colourful version of Starship Patrol, actually.

Lovers in a Dangerous Spacetime’s twenty levels are plenty enough to keep you entertained by the price point. For the biggest challenge and perhaps the most entertainment, you’ll need to get a few friends together to take the game on in co-op – but thanks to a clever CPU, there’s fun to be had here on your own, too.

Lovers in a Dangerous Spacetime

Whether you want fun as a group or something to occupy your alone time, Lovers in a Dangerous Spacetime can check both boxes. Charming visuals and addictive gameplay are always a potent combination, but the game just slightly lacks that wow factor needed to be deserving of an even higher score.

One thought on “Lovers in a Dangerous Spacetime Review”