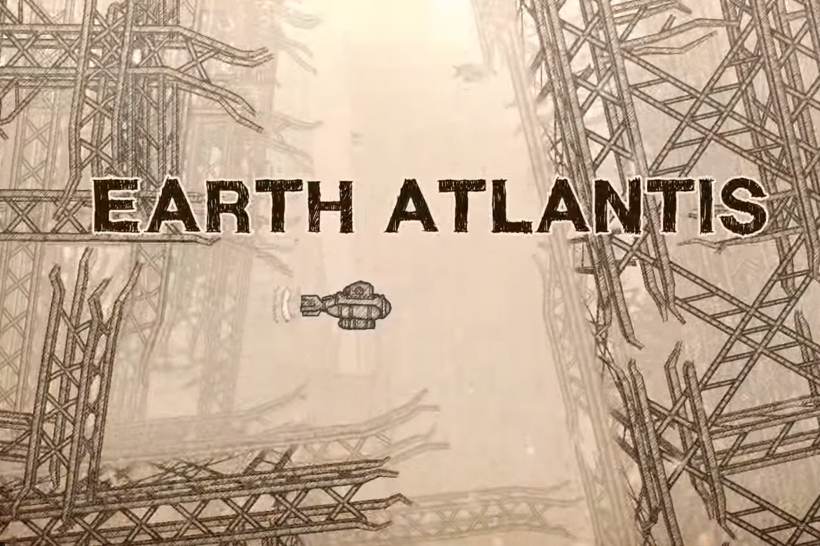 Earth is underwater and machines have become mechanised fish intent on destroying mankind. Your mission is to pilot a ‘hunter’ submarine to destroy the monsters. This is Earth Atlantis.

In the “shmup” genre, Earth Atlantis isn’t just a simple horizontal left to right affair. You’re exploring the caves beneath the surface whilst battling gradually stronger robo-fish. A small mini-map in the corner of the screen guides you on your way to find the monsters that you’re hunting and powerups to help you on your way. As you traverse the caverns you steer your hunter with the stick and just two buttons: shoot and turn around.

Beyond the exploration, where this game really shines is the gorgeous art style. In an era where every indie game seems to be a homage to 8 and 16-bit gaming, Perfect Pixel has decided to take a different tack and used a sumptuous hand-drawn style. This isn’t just Doodle Jump underwater though; creatures in the background move around and the 3D depth is something that screenshots simply don’t do the game justice. The whole effect is as though a piece of parchment is coming alive to tell your story. The design itself feels very Jules Verne-esque, giving this a timeless quality that will still look great in another ten or twenty years. It’s a shame that the action is so frenetic you really don’t get to appreciate it all as much as you’d like.

Starting the game, you have a single cannon which is gradually improved by picking up powerups that fallen enemies randomly drop. Gain enough and you’ll have cannons stacked on your hunter shooting in multiple directions.  These are essential to progress in the game otherwise, when you come up against a boss monster, you’ll feel like you’ve brought a pea-shooter to the Somme.

The second kind of power-up is the addons which are hidden in canisters. These are missiles, bombs and homing missiles which fire off alongside your main cannons. Once you shoot open the canister, the powerup appears. If you find the same power-up in the case then your power-ups stack just like the main cannon. Alternatively, collect the new secondary and then it will replace your current loadout. This is where Earth Atlantis gets frustrating. Often, you’ll find powerups that mean losing the stacked ones that you horde. There’s no sensible reason why it’s random and feels more of a hindrance than a useful boost.

Gaining strength, you’ll find progressing through the maze is easier and easier. Right until you hit the bosses. They are hard in a classic gaming sense. The sizes and attacks vary and keep you on your toes for forcing you to learn the patterns. Some charge at you which is almost always instant death. Unless you’re kitted up, it’s a struggle to defeat them.

Should you see the Game Over screen, you’re sent back to your last “start point” sans power-ups. Now you have to find your way to the boss again, while also going back and forth forcing enemies to respawn, grinding over and over until you’re back to the power you were.

This is what lets down Earth Atlantis for me. The game is a challenging shmup but the checkpoints are few and far between. It reminds me of those 8-bit days where you would battle to a boss, get beaten, then play the game all over again. It isn’t quite as infuriating but it does feel like it asks for unnecessary time to be wasted, making the action start to feel repetitive.

Earth Atlantis is a fun, competent and very challenging shooter. The three difficulty modes will keep even hardened shmup fans occupied, while more casual players will enjoy dipping their toe into this gorgeous world just to see it in action. But if you want to see this through to the end, you’ll need to be real shmup fan.