A major new system update was released overnight for the Nintendo Switch, taking the console to version 4.0.0.

The update adds a few new, key features – most notably the ability to record up to 30 seconds of video footage using the Capture button.

If something awesome happens while you are playing, holding the Capture button will save the last 30 seconds of gameplay and add it to your Gallery – you can then edit and trim the footage as you wish before posting it to Facebook or Twitter. This feature is only available in ARMS, The Legend of Zelda: Breath of the Wild, Mario Kart 8 Deluxe and Splatoon 2 currently, but we can be sure that more titles will be added in due time – especially with a certain Mario game being released next week!

Check out the video below to see this in action;

The update also brings the ability to transfer save data and users to another Nintendo Switch console.  To do this you will need to go to “User” option in the “Settings” menu. However, moving a user and data to a new Switch will wipe the data from the original console – meaning eShop games will follow to the new system and disappear from the old.
Pre-purchasing and pre-loading of select titles will also be available in the eShop, meaning that you can download games prior to release and play them as soon as they become available. New user icons were also added, so you can now choose from images and characters from Breath of the Wild and Super Mario Odyssey if you so wish.
There is also an update for your Joy-Con – if you go to the “Settings” menu and look under the “Controllers” menu you will see the option there.

Check out the full patch notes courtesy of Nintendo below to see everything that this update adds; 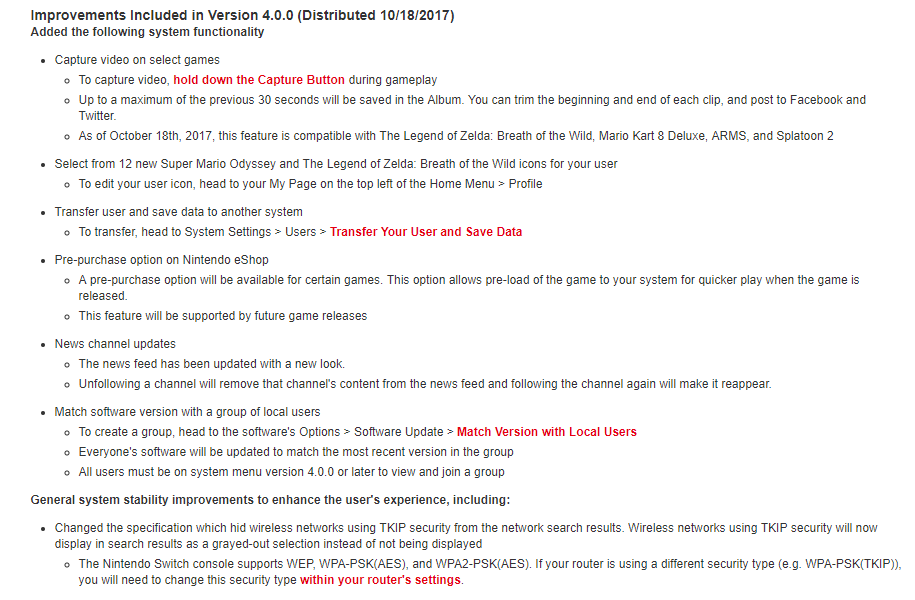 I look forward to seeing all your video clips uploaded to Twitter! Be sure to tag us in them so we can share the best ones! Let us know what you are most excited by in this update and what you would like to see in future updates in the comments below!