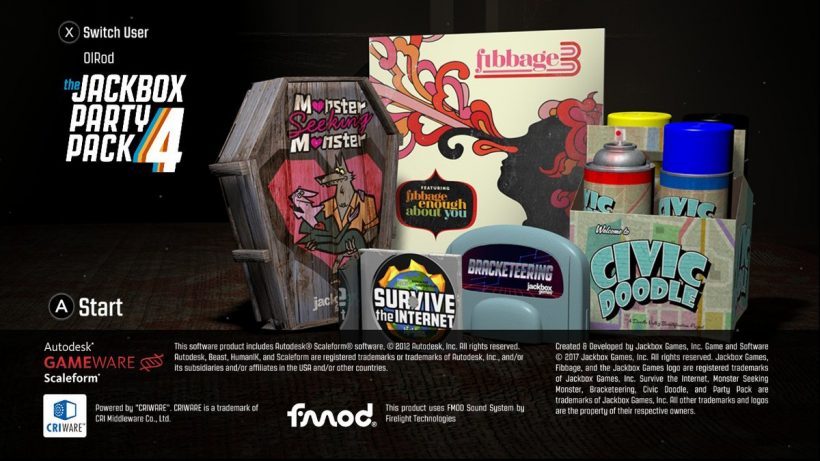 Yes, they already had all of the content ready and waiting to use at their disposal, but something’s got to be said for how quickly Jackbox Games have managed to put together four Party Packs’ worth of contributions to the Switch eShop.

So let’s rattle right into the games, which of course are the bread and butter of the package. Fibbage 3 opens us up – this one is unchanged, minus the content of the questions, of course, from the Fibbage offerings in the other Jackbox Games. Each player needs a phone, and you’ll enter incorrect answers with the aim of convincing the other players they’re genuine. Then, all submitted answers will be added to the correct answer and one wrong answer created by the house – and then each player will need to choose the one they think is the correct one. It’s all very easy to grasp, but not quite as easy to figure out the correct answers, as the general knowledge is very niche. A new subset of Fibbage, Enough About You has you guessing facts about your fellow players in a slight adjustment to the formula.

Survive the Internet is the second main game, and again this has you taking cues before you can generate as funny an input as you like. The ultimate formula is the same though – everyone submits their answers, and then the group each decide which answer made them laugh the most.

Monster Seeking Monster is up next, and here you are taking part in what is basically an online dating game but one where you’ll need to come up with answers to try to impress a potential match – you’ll target the character you want to attempt to woo, and eventually you’ll end up pairing ghosts with humans. It’s all rather weird.

Bracketeering has a Virtual Boy-esque retro gaming feel – a 3D-looking isometric grid provides the background, but the main attraction here is a game formed around a bracketology which generates popularity contests, sometimes mixing things up by not showing you answers you’re competing against. Audience votes come into play to decide progression; this one’s better the more players you have on board.

Lastly, Civic Doodle has you town-planning in the form of drawing. From scribbling your name onto a “Hi My Name Is” badge to designing things for a mural in the town, this one can be interesting and is a welcome alternative from the other games in the package – which are all comparatively similar.

Tragically, there’s no return for the wonderful Blast Corps game from the second Jackbox Party Pack, and in fact, there’s nothing here whatsoever that one person can get stuck into on their own. I found fault with that in my reviews of the earlier games in the collection; unless you’ve got a group of people together, which for a lot of people is not a viable option for much of the time, you’re not going to even think about touching the game. Sadly, that is a flaw here too: Fibbage 3 can be played with two people, but if you want to play anything else you’re going to need a minimum of three.

You’re also going to need an internet connection – there’s no playing this in the car – at least, not on your Switch, without getting into the fiddly business of hooking your Switch up to a phone hotspot. However, if, for example, you had friends somewhere else who were livestreaming a game, you could take part remotely from your car using your phone’s data – but you’d likely need a second display phone for showing the livestream, alongside the one that you’re entering your answers into.

As I’ve previously maintained, these games’ worth can only really be determined if you have loads of people handy, and people who can think of entertaining answers at that. Sadly, the price point is far too much for what it is – you’re going to need to fork out about £100 for all four of the packs. The sum of the parts isn’t worth what’s being charged for the whole.

One thought on “The Jackbox Party Pack 4 Review”