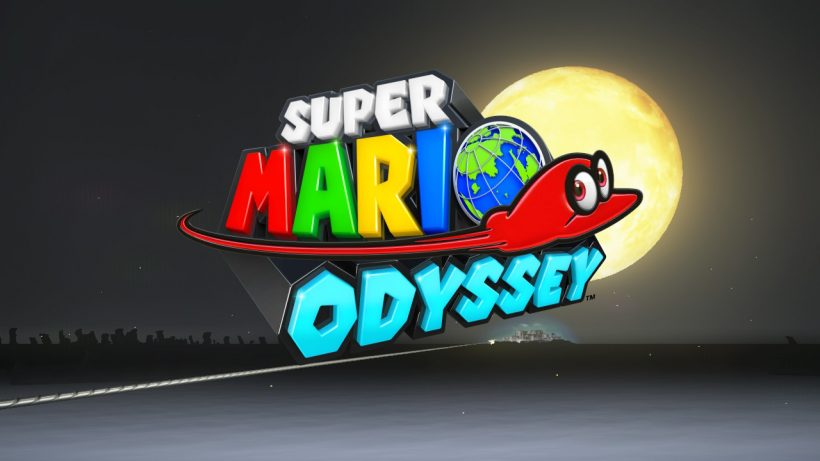 Is Mario’s latest adventure his best journey yet?

When was the last time that a core Super Mario title really impressed you? I suppose that answer could depend on your age and Nintendo experience. I’ve loved Mario’s many adventures over the last 30-odd years, through Sunshine, Worlds and Galaxies but the last time that I was left truly mesmerised by the series was 1997’s Super Mario 64. Sure, visually it’s dated these days, but the open-world nature, the imagination and the transference from a damn-fine 2D platformer series (and arguably one of the best of all-time in Super Mario World) to showing how it should all play out in three dimensions is a magic that I don’t think Nintendo has quite topped since. That awestruck feeling I felt when exploring the majestic world around Peach’s castle had never been replicated again, despite the enjoyment the franchise has given me since. Until now, that is. It’s taken them 20 years, but Nintendo has managed to recapture that formula and, in Super Mario Odyssey, engineered an experience which is truly breathtaking and surpasses any Mario game since their Nintendo 64 days; and arguably their best game, ever. As always seems to be the case, Bowser is up to no good again and this time he (predictably) hatches a plan which will see the nefarious villain marry Princess Peach. He’s got this super wedding in mind, and this time some meticulous organisation and efficiency from his cronies has resulted in the procurement of many items from throughout Super Mario Odyssey’s multiple kingdoms; including a resident from the Cap Kingdom, Tiara. Not content with seeing Peach abducted, it’s down to our mustachioed plumber to chase Bowser across the world save the day. Again.

This time, he’s not alone. Accompanied by Cappy, a spiritual inhabitant from the Cap Kingdom, who is not best pleased to see his sister cap-ducted. After Mario gets his dungarees well and truly kicked and Bowser tears off through the skies in his airship, Cappy agrees to assist you in your journey. Our newly acquired ghostly chum has a special ability up his sleeve, and has the ability to take control of certain things and effectively possess Mario’s trademark cap. Well, he probably needed a new one anyway. 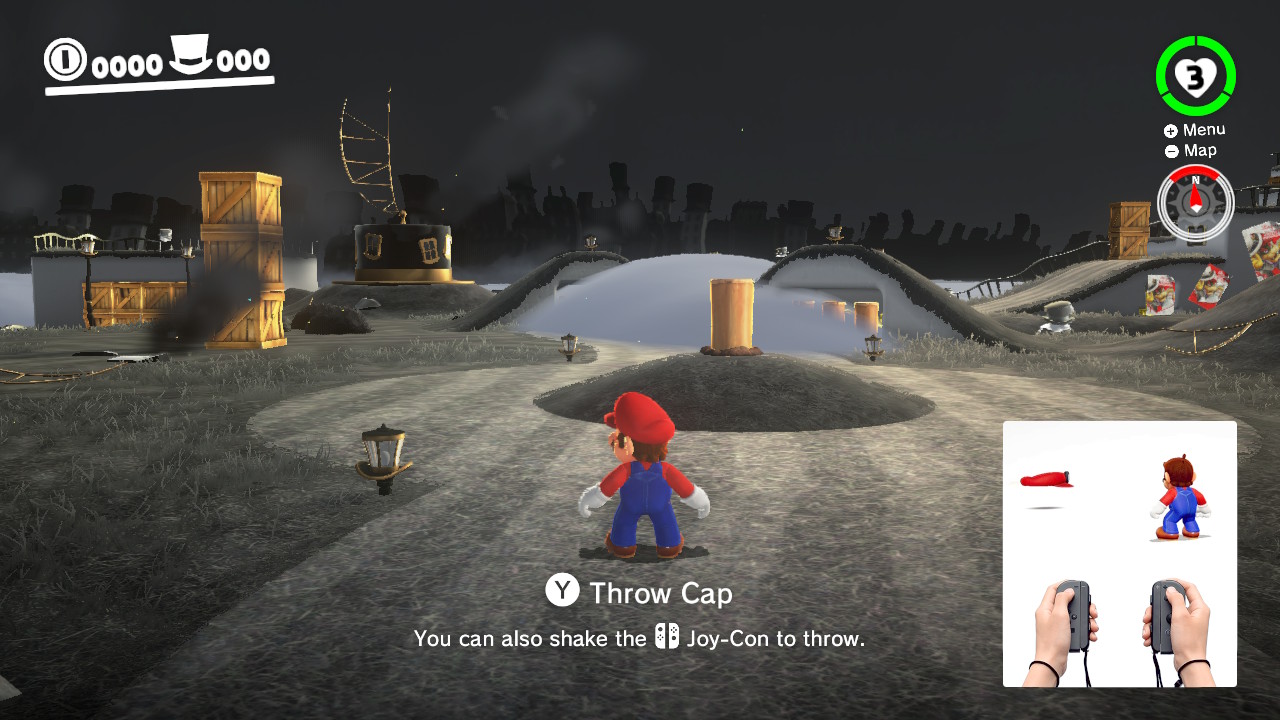 You begin in Cappy’s hometown and it’s here that you get to grips with the new mechanics that Cappy’s inclusion brings. First of all, you can chuck him by pressing Y, luzzing him in any direction which will collect coins, hearts and make short work of any enemies within your throwing radius. Next are some more advanced moves, like having Cappy circulate around you for a short while, or even using him as a springboard of sorts to jump even further. Finally, as noted above – and the one you are most likely familiar with – is the ability to take over other things; specifically characters, and it’s something you are introduced with one of the most laugh-out-loud moments in Mario history before being demonstrated with gigantic, dramatic effect early on in the Cascade Kingdom as your journey literally sparks into life. You would be excused for thinking that Nintendo played their trump card too early, but trust me – that isn’t even the high point! In fact, there are over 50 different transformations to control, each with specific skills and abilities to aid you in your progress, and most will get a wry smile from you as you become them.

First things first, though, you’ll need to locate the means to catch up with Bowser and you’ll find the titular Odyssey in a very bad state. The thing runs on Power Moons, and you are then tasked with exploring the world around you to collect the required number before the ship powers up and sets you on your merry way. Players worried that this could ultimately hinder and limit speedy progress needn’t be; there are a huge number of Moons either squirrelled away or hiding in plain sight, and you’ll typically get multiples from facing off against the many boss battles you face along your adventure. I’ll get back to those later, but the point is that cumulatively there are literally hundreds and hundreds of the things.

Also in plentiful supply are the many kingdoms to explore in Super Mario Odyssey. All of them look incredible, and all look widely different to each other. Whether it’s the luscious and refreshing feel of the Seaside, the calming presence of the trees in the Forest, or the busy and living city life in the Metro Kingdom, every location possesses its own identity. That variety spills over into the collectible funds too, with each destination using specific currency in addition to your standard Mario coinage. The Cap Kingdom’s pennies are hat-shaped, for example, with scales, cogs, leaves, and so on. With these, you can purchase outfits, stickers and collectibles unique to each destination, as well as partaking in many site-specific activities. Odyssey‘s environments are all like open world hubs, which will be pleasing for those that loved Super Mario 64 and Super Mario Sunshine and somewhat familiar to those that enjoyed the open, expansive nature of Breath of the Wild. Although not on the same scale (being individual areas rather than one, huge world) some areas are substantially bigger than others, but they are all packed with secrets and places to explore. Returning to previously visited lands often yields unexpected secrets, especially post-game. I was constantly finding something new every time as I returned to collect more Power Moons. As noted above, there are hundreds of the bleeders, and you end up feeling like you’ve got to catch them all.

Combat in Super Mario Odyssey should be familiar to long-time stalwarts of the franchise. In addition to the Cappy-chucking shenanigans, Mario can also bounce around, off walls and foes alike, and the triple jump is also present. For those unfamiliar, tapping the jump button three times in succession will bounce Mario higher and more acrobatically than a regular leap. You can chuck Cappy ahead of you as well and bounce off him for greater distance, and you can also side-somersault, back-flip, ground pound, hang from ledges and even perform a long-jump. Mastery of all of these skills will be crucial to obtaining all of the game’s moons, coins and secrets as well as to avoid failure. 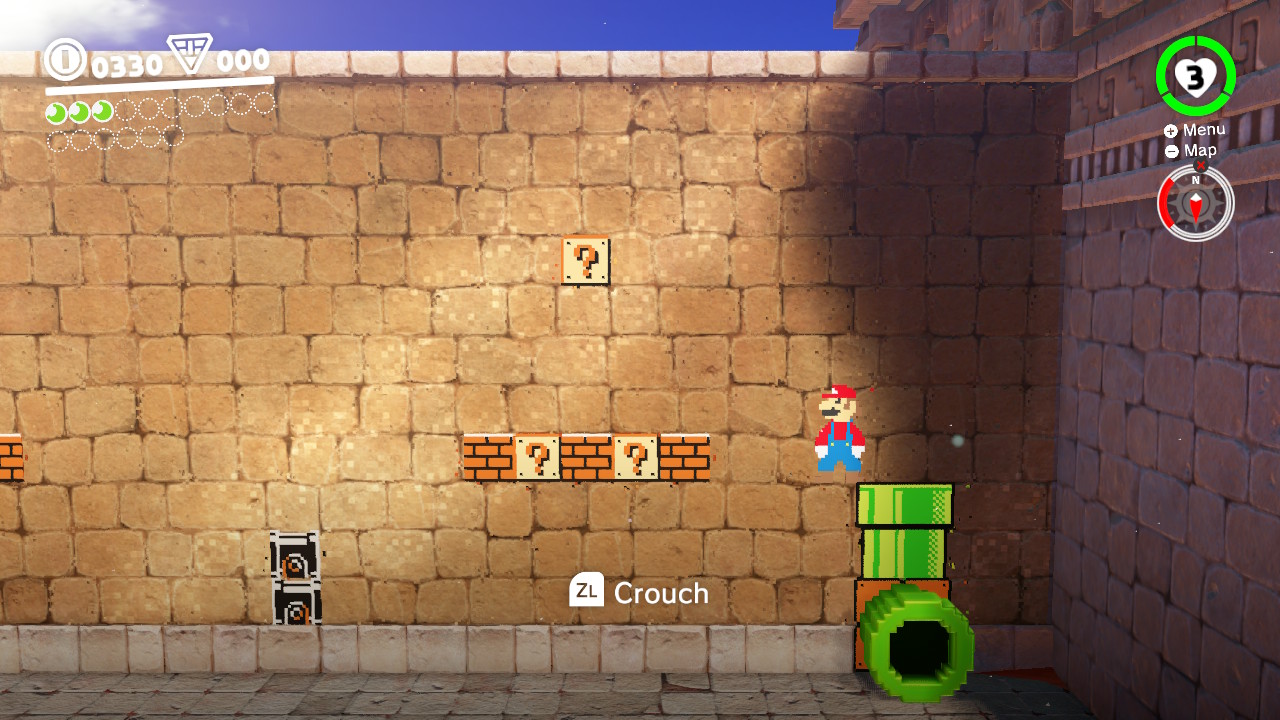 Speaking of failure, there’s no perma-death here, nor power-ups. Mario has three hearts of health (which can be temporarily upgraded to six) and should you fail at any point you’ll be docked 10 coins and reappear at the last auto-save point, usually a check-point flag or, more likely, a boss encounter.

Ah, yes, the bosses. One of my absolute favourite bits of Super Mario Odyssey are the boss encounters. You will face off multiple times against his minions along the way, and this time they are the mental Broodals. A group of anthropomorphic Rabbits, all have slightly different attacks and they will continually attempt to thwart your progress in most of the worlds you visit. Most worlds also have their own boss fight in addition to those pesky rabbits, and these are particularly memorable – probably the best yet in a Mario title. They follow the usual bop-three-times style that has always been prevalent, but with each successful hit the phases become more challenging. If the game is too challenging there is an “assist mode” with helps you on your way, doubles your health and allows it to regenerate. Oh, and it’ll return you to the world if you fall off the edge. The presentation in Super Mario Odyssey is nothing short of outstanding. For such a relatively meagre file size (5.2 GB) everything looks incredible; this is the best looking Mario title yet – but the presentation goes beyond that. Every location has its own pamphlet-style map explaining a few things about it and marking out important locations. The game’s soundtrack is phenomenal, and yes, that song is in the game. The set-piece to which it unfolds is nothing short of spectacular and probably one of my favourite moments in any Mario game. As you would also expect, the HD Rumble is used exceptionally well throughout your adventure. Try riding a Scooter in New Donk City, for example.

As well as the standard three-dimensional plumber action, at various points in the game you can transform into the retro-styled Mario gameplay. Typically this is to get from one place to another but they are a welcome and nostalgic throwback to where it all began. As mentioned before, Mario can obtain a variety of outfits and many of these hark back to other games in the series, one in particular does more to reinforce which game this is essentially the spiritual successor to… 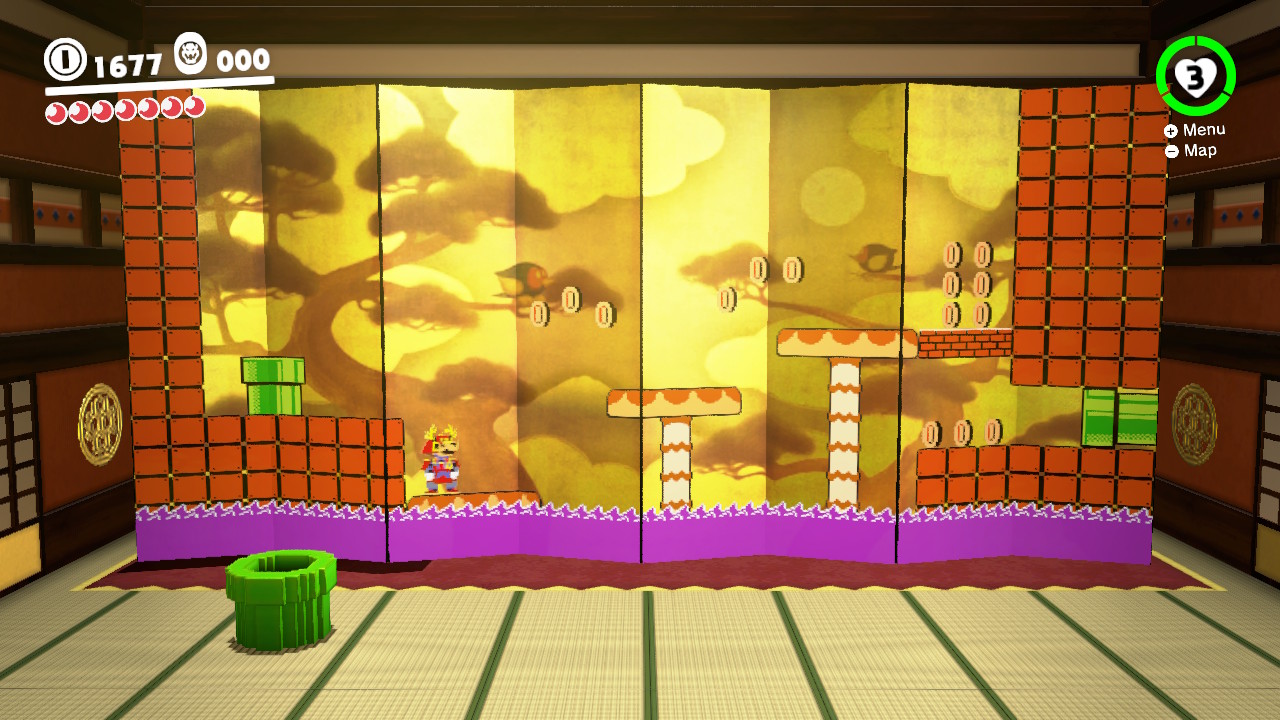 As well as playing with standard controls, you can also play Super Mario Odyssey with Joy-Con in hand and making movements with the controllers will perform a variety of Cappy’s actions, as well as enhancing a variety of maneuvers, climbing for one by rapidly shaking them as you climb. The game can also be played with a second player as well, with one of you using one half of the Joy-Con to play as Mario with the other using the second half to control Cappy. Teamwork and coordination will be essential as you work together to navigate levels. It’s challenging but a lot of fun.

There is so much to see and do here, with 17 kingdoms (three of which are post-game) and a substantial amount of collectibles, you’ll need to really test the grey matter and reflexes to get everything. Even once you reach the game’s inevitable conclusion against Bowser, it still doesn’t end there: it gets even better after that – they really did save the best for last. You are going to love it. Even then, you’ve got so much to still look forward to and discover. It really is an odyssey. 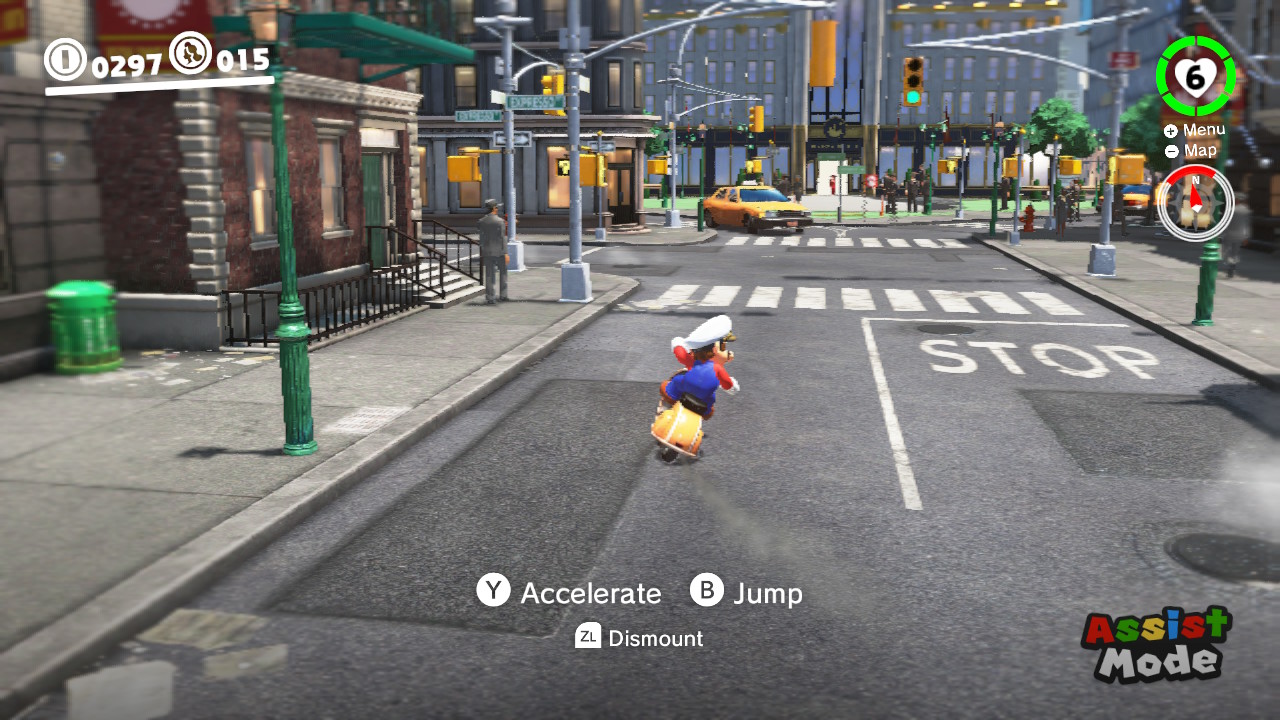 In just a short space of time the Nintendo Switch has amassed a huge library of fantastic titles although Breath of the Wild aside (which is available on Wii U) you could argue that it lacked that killer title, the quintessential “must-have” game. Not anymore. This is that game. You need it. It’s Mario’s best adventure yet.

Not since Super Mario 64 has a Mario adventure had me this captivated, immersed or impressed. Super Mario Odyssey is Nintendo’s finest Super Mario title yet, and easily the most impressive Nintendo Switch title available. With so much to see and do – long after you’ve dispatched Bowser – you’ll be returning to the Odyssey for a long time. Essential for all Switch owners and worth buying a Switch for. It’s that good.