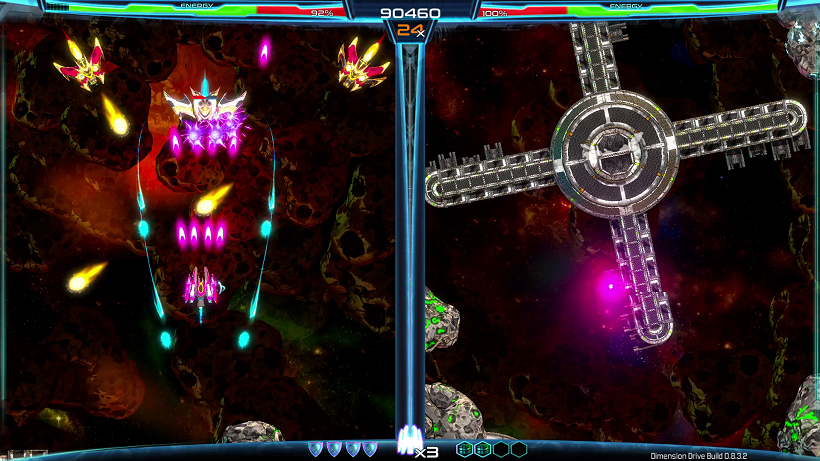 2Awesome Studios revealed today on Twitter that their dual screen shmup Dimension Drive will be releasing on Nintendo Switch on December 7th with a price of €12.99/$12.99.

Paul and I managed to get some hands on time with this at EGX, and can say that this game was fantastic!

Here is what Paul had to say about the game;

“Have you played Velocity2X? If you could imagine a cross between R-Type and Futurlab’s incredible shooter then you probably wouldn’t be far off 2Awesome’s Dimension Drive. The game is a split screen vertical shoot-’em-up with a difference, two battlefields are in play simultaneously and you’ll need to alternate between both to attack enemies and avoid obstacles. You can teleport between the two but you’ll have to plan your moves wisely! There is also a catch in that your energy will only recharge for one half of the battlefield whilst you aren’t on it, and you need that to shoot…

With online leaderboard support and an advanced scoring system, a plethora of different levels and local co-op for even more explosive carnage, the is definitely one for shooter fans to keep an eye on, and that vibrant art is more than likely to catch your eye.”

The 2Awesome Studio’s website tells us that Dimension Drive will feature the following;

A new trailer for the game has also been released, which you can view below;