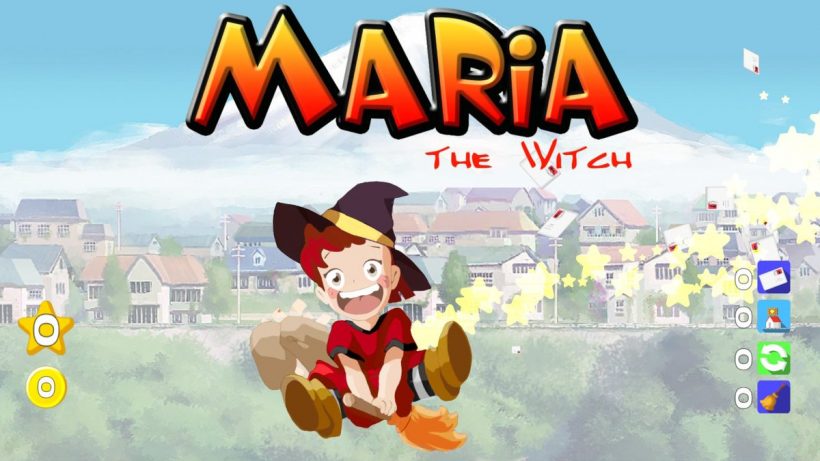 Most of you will remember when Flappy Bird was the big thing in mobile gaming. Its simplicity was key to its success – the game takes charge of the moving forward, and the player simply needed to tap the screen enough that the bird flapped its wings to get over and around obstacles. It’s a formula which is in play in Maria the Witch. Sub out the bird, sub in a witch on a broomstick, and you’re most of the way there.

Basically, the premise of the game is that you need to get from your starting point to an end point while riding a broomstick. There are enemies to avoid along the way, but perhaps even more annoying are the land objects which are plentiful and only require you to brush them to result in starting again. Fortunately, there are checkpoints throughout each level so you don’t always have to restart from the start of the level, but you’ll need to use a coin in order to activate the checkpoint. Coins are sparsely located across the level and you’ll have to fly into them to collect them.

All of these checkpoints are identifiable from their road-like appearance; landing anywhere else will immediately send you back to the last checkpoint. It’s about keeping airborne while the obstacles close in thick and fast. It’s like Flappy Bird, just with even less control over where you’re going. Rather than simply factoring up and down into your directional plans, you’ve got to take in left and right. A short tap of the Y and A buttons will, in theory, send you directly forwards, either left or right, but holding them down will perform what is basically a loop the loop, and it’s here that the controls become complicated to the point of frustrating.

There’s very little control over the access of your loop, and it’s difficult to press into the mind exactly what axis you need to hit in order to navigate between two close obstacles in order to make it to all the pickups. Space is so limited to perform any kind of manoeuvre, and when you’ve left a checkpoint in search of the next one, it can feel like you have very little control over Maria. Hitting one direction and then the other does not reverse a rotation – it starts another – and that’s another bugbear. So many easy-looking jumps can be missed simply by the difficulty in understanding the controls, and that perhaps misses the pick up and play aspect of the genre.

There are secret tunnels featuring collectibles just out of the line of sight of the beaten path, and it takes witchcraft to be able to reach a lot of them. You’re going to get really tired of hearing Maria’s game over scream as you smack a wall on a seemingly easy entranceway simply because of the smallest of margins.

While the game is nice to look at, there’s a few too many frustrations here to give it a full recommendation. Patience is key; at just a fiver there’s some reward in the satisfaction of completing levels, but most won’t have the patience to go after those collectibles.

While Maria the Witch seems slightly more complicated than your typical game, a better button outlay may have made it a lot less frustrating. I just wanted to be in control, or to feel in control, of Maria far more than I did. Now to go and lie down before I have nightmares of flying my broomstick into yet another wall…