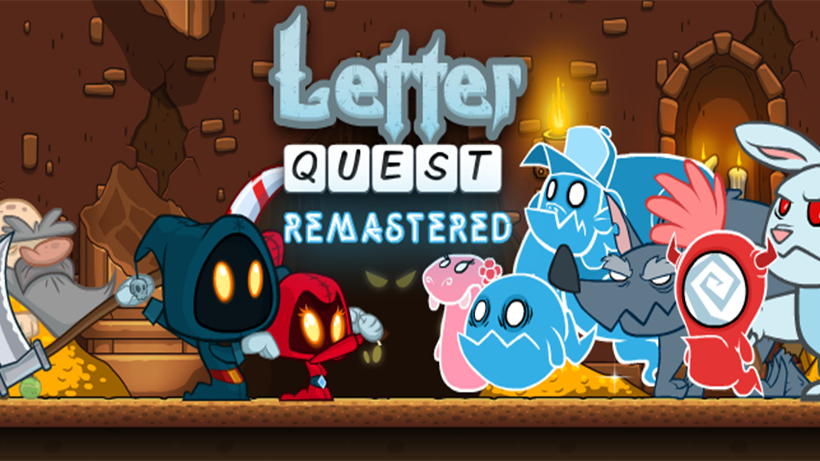 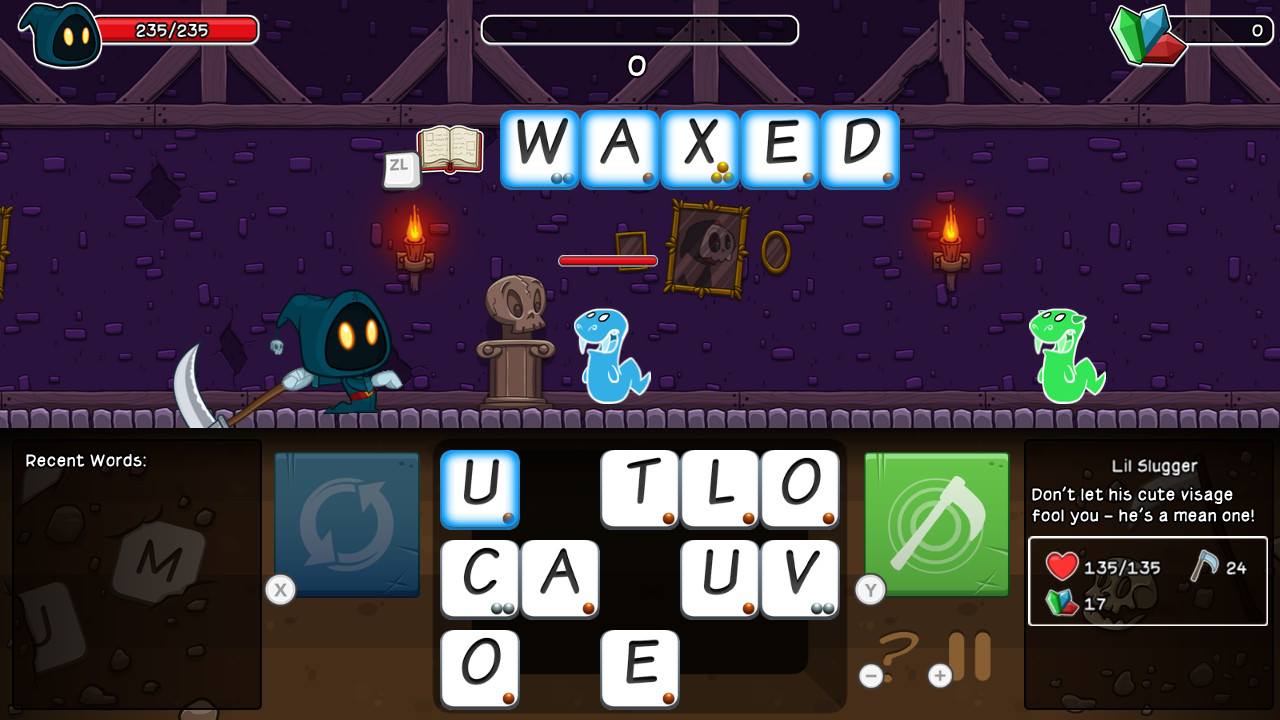 Letter Quest Remastered tasks you with spelling out words to defeat enemies and clear the path to the most precious of treasures. Pizza. At first, it sounds like a strange combination to have an RPG and word puzzles but they work fantastically here. It’s a straightforward gameplay loop, each level has several monsters in your way and you have to spell out words using the letter tiles given to you in order to deal damage. All the letters deal various amount of damage, for example, if you use the letter J or X you’ll be dealing more damage than using letters such as A or P – a good vocabulary is vital to clearing some of the tougher sections of the game. To keep things really interesting the enemies and bosses of the game all have their own attacks and abilities, one attack may flood your letter pool with the letter Z for example or some bosses may not take damage from any words longer than 5 letters. These quirks force you to think on your feet and stop things from becoming repetitive. 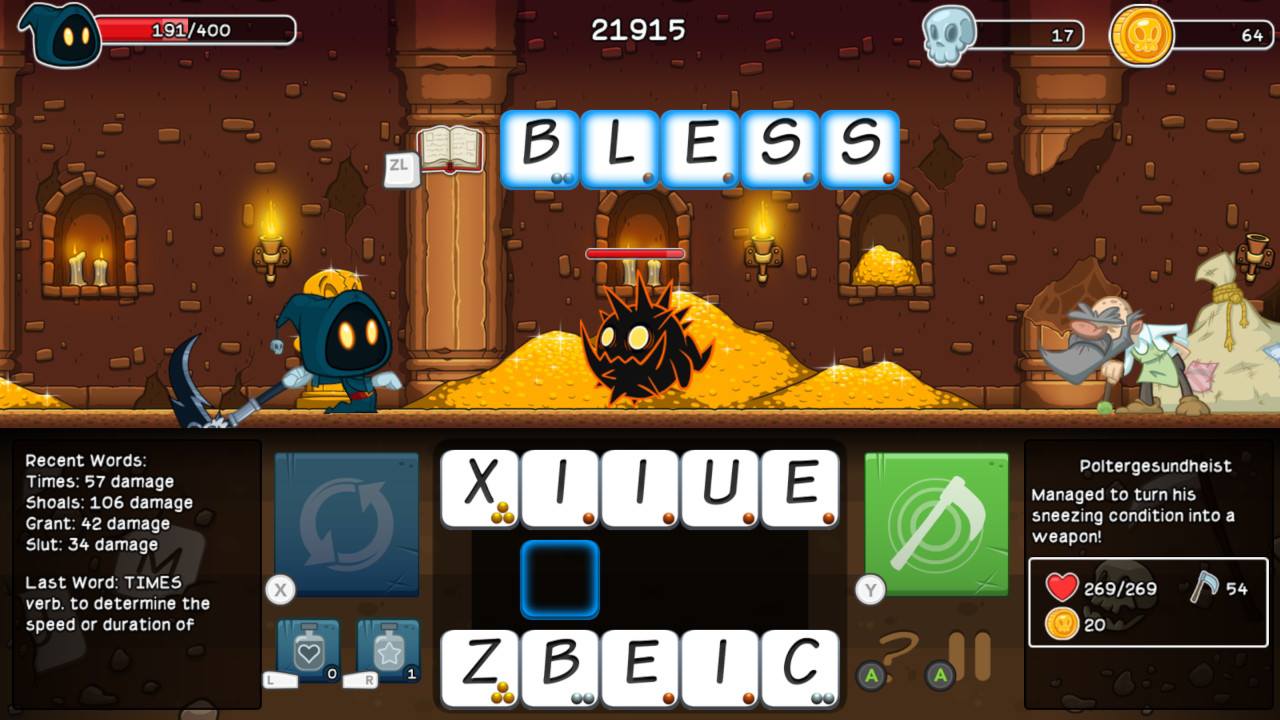 In between levels you spend your hard-earned gems on powering up your character and unlocking new abilities via books. Although limited, these few customisation’s help you prep your character in a way that suits you – if you fancy yourself as a big word aficionado then take the book that deals extra damage for 6 letter or more words. Some of the options are duds though that feel like padding more than anything else and this begins to highlight the limits on the RPG elements present in the game. With 40 levels to clear it doesn’t take long for the game to run out of genuine surprises or game-changing elements, pretty early on you’ll have your favourite abilities and know what to expect from most enemies – it’s a shame but doesn’t stop what is on offer from being good fun to play. 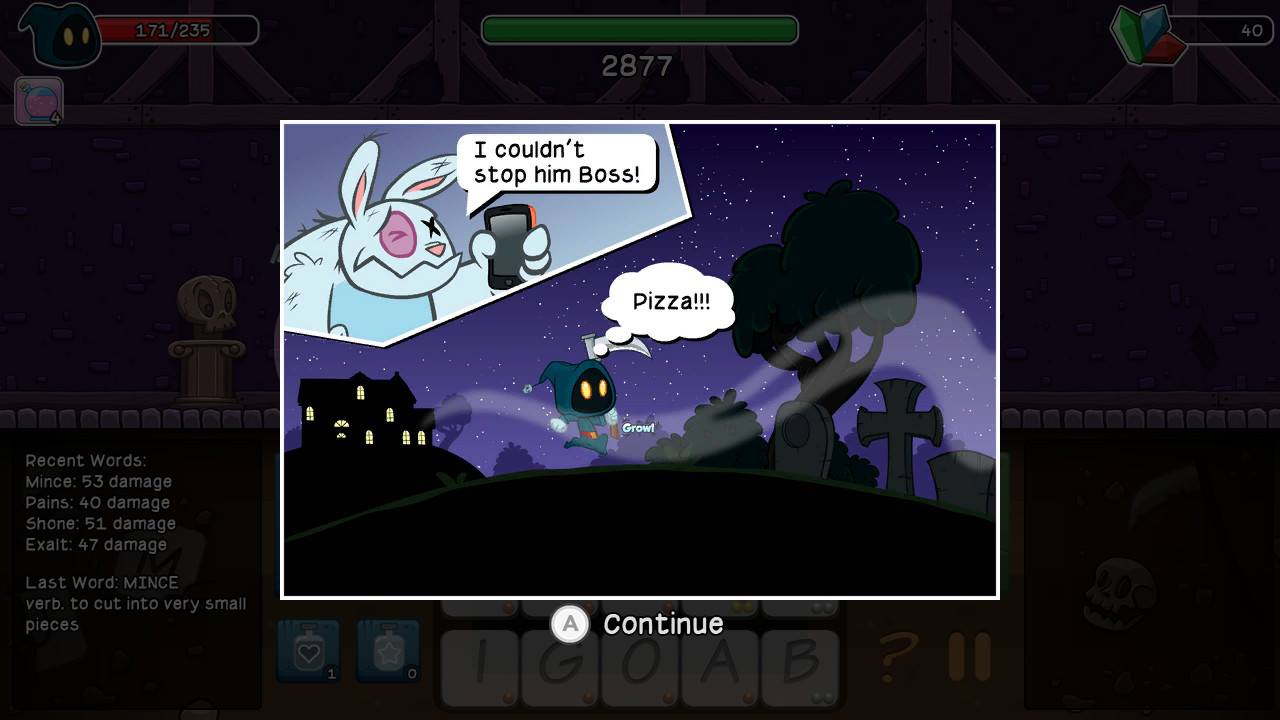 The game features nice bright enemies and locales with some fun names and bios to admire as you’re busy hacking them apart using the power of words. There are only a few enemy types present, with the game making the most of palette swaps to pad out the hordes. It becomes a little repetitive to see yet another bunny boss but this is hardly a game breaker. Every now and then you’ll be treated to a short comic strip detailing Grimm’s quest for pizza – the game likes to make occasional jokes but doesn’t try to beat you over the head with its comedy so you’d be entirely forgiven if you ignored the story entirely.

If word puzzles are your thing then I couldn’t recommend Letter Quest Remastered enough, it’s blend of RPG and traditional word puzzles create an interesting concept that is fun to play and has fun playing with the rules to make things more interesting. The only downside to the game is that it struggles to keep new ideas coming throughout the game and soon you feel like you’ve seen all there is to offer.

Letter Quest Remastered is a fun twist on the traditional word puzzle game by introducing RPG elements, although the game begins to run out of fresh ideas, the foundation of this game was such fun that it was still a blast to play through. The game needs a chance to flesh out its ideas more but in the mean time I suggest you get the dictionary out and play this game.