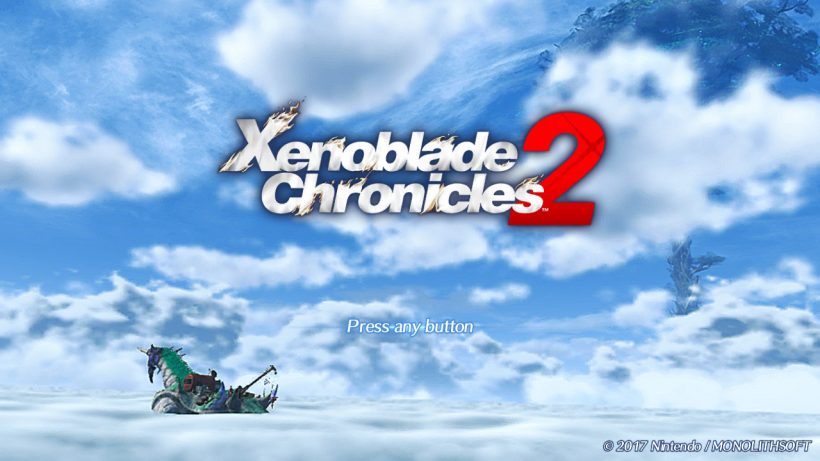 When Xenoblade Chronicles 2 was announced back at the Switch Presentation, it brought some serious questions: How can they make it so soon after X without sacrificing quality? Will its anime style demean the narrative? Can the Switch run a game with such ambition smoothly? I can say with certainty that any doubts I had going into it were very quickly quashed –  Xenoblade Chronicles 2 is the massive RPG of incredible quality we were hoping for.

Set in the cloud sea with titans as landmass, you follow the story of a young salvager called Rex as he suddenly goes from doing his day job to getting caught up in conflicts that have far-reaching consequences. Within the first chapter Rex meets a Blade called Pyra, who he promises to take to Elysium – a paradise of plenty atop the World Tree, the only land not situated on a titan. Blades are living weapons that are bonded to a Driver, and Pyra happens to be the legendary Aegis Blade whose great power is sought by people all over the world. Titans are dying out, so resources and territory are scarce amongst the different nations. Poverty, power and even fascism have profound effects on the cultures of the people, evidenced by the abundance of side quests you’d expect in a game like this. On that note, an absolutely brilliant feature is the ability to overlay a translucent map without accessing a menu. Simply click the left stick in and you toggle between no map, minimap, or an overlay. This is seriously handy for side quests!

As you progress through the chapter based story, different titans are available to explore like miniature open worlds. Following the story exclusively will make the journey on each titan seem somewhat linear, as the majority see you dock at a port and travel to a town or other destination to progress the story. Even if you stick to the set path, there’s no avoiding the beautiful scenery. Every titan has such an original design, with moving parts rendered way off in the distance that just constantly reminds you that the world really is alive – and there are logical reasons for the diversity in each titan’s ecosystem too. There might be an open nature to the worlds, but certain field skills learned through affinity with your blades prevent access to certain places. Typically, these are just tiny areas with some really nice loot or a tough enemy, but there are a few cases where certain attributes are required for story progression. While it’s implemented quite well across the game and does a good job of ensuring you’re using out of battle techniques, there came certain part I had to stuff the almighty Aegis with several 100 brioches so she would focus enough to open a door to make up for neglecting the system… a rare exception, but it highlights that you should use the system to your advantage throughout the whole playthrough. 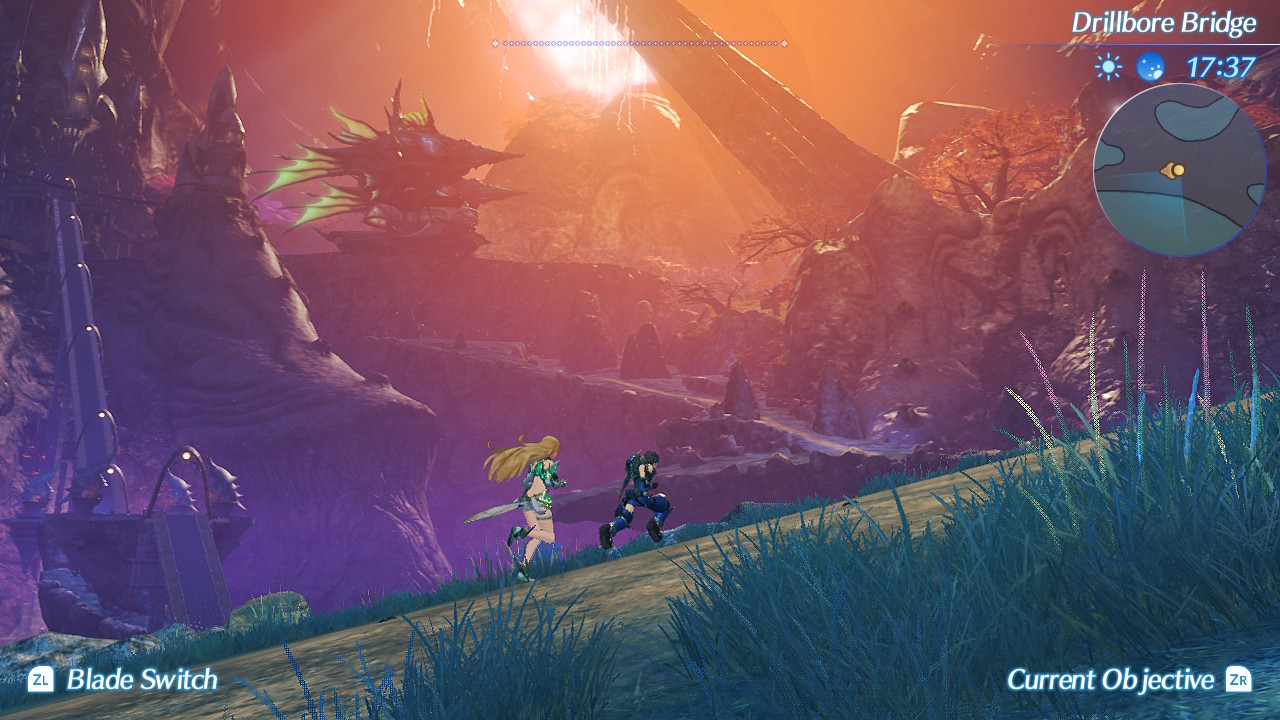 If you’ve played the previous games in the series, you’ll be aware of how complex the battle system is. Xenoblade Chronicles 2 plays on some of the same mechanics as its predecessors while adding several more layers of depth, yet the entire experience seems really refined in comparison. One of the best things this game does is ease you into it, with a friendly and well-spoken narrator that introduces only one or two mechanics at a time. In certain situations, where you gain an ability that requires you to charge something, the narrator lets you do it once without the charging just so you can get a feel for how it’s done or how it can integrate with other parts of the battle system. It’s an incredibly intuitive experience, that is if you actually follow along. Unfortunately, there is no way to repeat tutorials – so if you accidentally miss a vital bit of text, or have a break from the game before Chapter 4 (when you have access to everything in the system), chances are, you’ll miss something fundamental to the gameplay.

Done are the days of tedious menu based combat – Arts and Blades are assigned to the face buttons and D-pad respectively, with signals to your other party members given with ZL and ZR. In combat, Drivers can pair with up to 3 Blades (though this number is 2 until Chapter 4), each allowing you 3 Arts at a time. Then you’ve got a Special attack that has 3 (eventually 4) different iterations increasing in power. Between a party of 3 Drivers each with 3 Blades, that’s upwards of 60 moves in your arsenal at any given time! And that’s just the stuff on the surface. Factor in the different kind of combos and Blades, real-time and position based commitments – all alongside a large hierarchy of stats, abilities and buffs and you’ve got one complicated RPG. Even with the intuitive interface and friendly tutorials, there will be a steep learning curve for those not attuned to intricate systems. Once you understand it, overwhelming enemies with well planned and implemented strategies is so satisfying. The first time I pulled off a Chain Attack with elemental bursts from my previous blade combos while having my foe simultaneously toppled from my driver combo was so rewarding for me – not for defeating a boss with an impressive amount of damage, but because I knew I gained a proper grasp of the system. 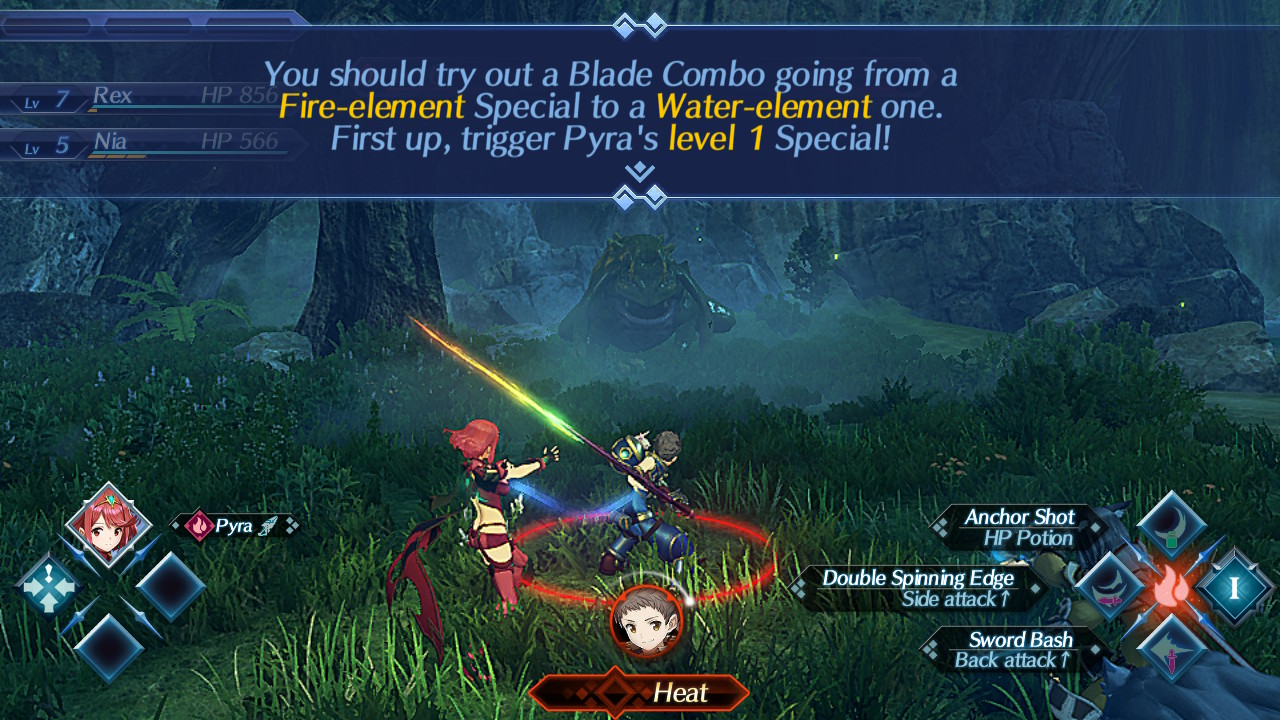 Trailers for Xenoblade Chronicles 2 had me worried the characters and story were going in the direction of a mediocre shounen anime, which would be a far cry from the thought-provoking themes of the original game. The opening scenes, however, made me a bit more optimistic. The range of regional accents and the quality of the voice acting makes for believable, genuine personality – even if a select few cast members don’t suit their voice too well. Some nations sound Scottish, others Australian and there’s a variety of northern and southern English dialects, which is refreshing in a game. Anime-esque expression really works with the characters too, especially compared to the lifeless robots used in Xenoblade X. Over-exaggeration is kept to a minimum by only being used as an occasional comedic device, while all the rest of the time it lets characters convey a wide variety of expressions that haven’t been done in the previous games. The story itself takes a while to get anywhere as the overarching direction is predictable for a while until things really pick up. Regardless, the characters are diverse and most develop well. Some emotional drives are a bit generic and lacking too, but Xenoblade Chronicles 2 is far from the Blade Arts on Titans it could have been.

How the game performs is generally positive, but isn’t without its flaws. The game loads incredibly fast in all instances, almost instantly in most cases – no more waiting for object properties to load like in X. In both docked and portable modes, the game either has a dynamic resolution or a very extreme level of distance – things can often seem blurry when you’re close to the screen. Framerate is a little jittery in densely populated areas and battles with a lot going on, though it’s never enough to break your immersion. In handheld mode, the resolution lowers and framerate drops are more pronounced, sometimes joined by audio popping (though not if you use headphones). It may seem like there’s a lot wrong with the game from what I’ve listed, but the ‘Switch Factor’ rectifies a lot of it. As someone who preferred Xenoblade Chronicles 3D to its home console counterpart for portability, I can say the difference between the modes the Switch offers are minimal in comparison. And unlike the low-res viewing and illegible UI of X on the Wii U Gamepad, Xenoblade Chronicles 2 is still a treat for the eyes in handheld mode. And just before I wrap this up, I couldn’t end without a quick mention of the music in the game. Put shortly, it is perhaps one of the best-written scores for any form of media that has existed. Each piece so accurately captures the feeling of its environment or purpose. Well designed melodies are implemented across the board with catchy battle music, peaceful ambiance, inspiring orchestral and choir pieces and all in between – it all comes together to let you escape into an amazing fantasy with its timeless soundtrack.

Xenoblade Chronicles 2 is a lot of things for me: it’s a true successor to the original that refines and improves elements of the series and the genre as a whole, it has worlds that are a joy to delve into and a combat system that is engaging and requires a lot of pre-battle strategies and real-time action. Despite this, I felt the story wasn’t as deep or well explored consistently throughout the entire game as I was hoping – it’s still good in its own right, it just had a lot to live up to from the original for me. Even then, this is still one of the greatest RPGs ever made and a personal favourite.

Xenoblade Chronicles 2 is the true successor to the original. Monolith has once again demonstrated how refining and innovating RPG elements in a world crafted with quality can continue to push the genre. Like previous entries, a potentially steep learning curve may put off some onlookers, but even the tutorials are welcoming and improved. Not to mention it has one of the greatest soundtracks out there. I would highly recommend this game to anyone regardless of whether they own a Switch or not.