After seeing Yooka-Laylee release on Sony and Microsoft’s consoles earlier in the year, Nintendo fans have been (not so) patiently waiting for Playtonic’s title to make its appearance on the Nintendo Switch. With a development team consisting of Rare-alumni, Yooka-Laylee is the spiritual successor to Banjo-Kazooie – so, rather fittingly, the Nintendo Switch version is the best place to experience this trip down memory lane.

The extra time that Playtonic has taken to work on the Nintendo Switch version has paid dividends. The PS4 and Xbox One versions of the game released to a mixed reception, and the Switch release sees a lot of the issues that were called out in the earlier versions fixed – but there are some design flaws that prevent this from being able to reach the same lofty heights as its N64 predecessors, but I’ll leave them for later! 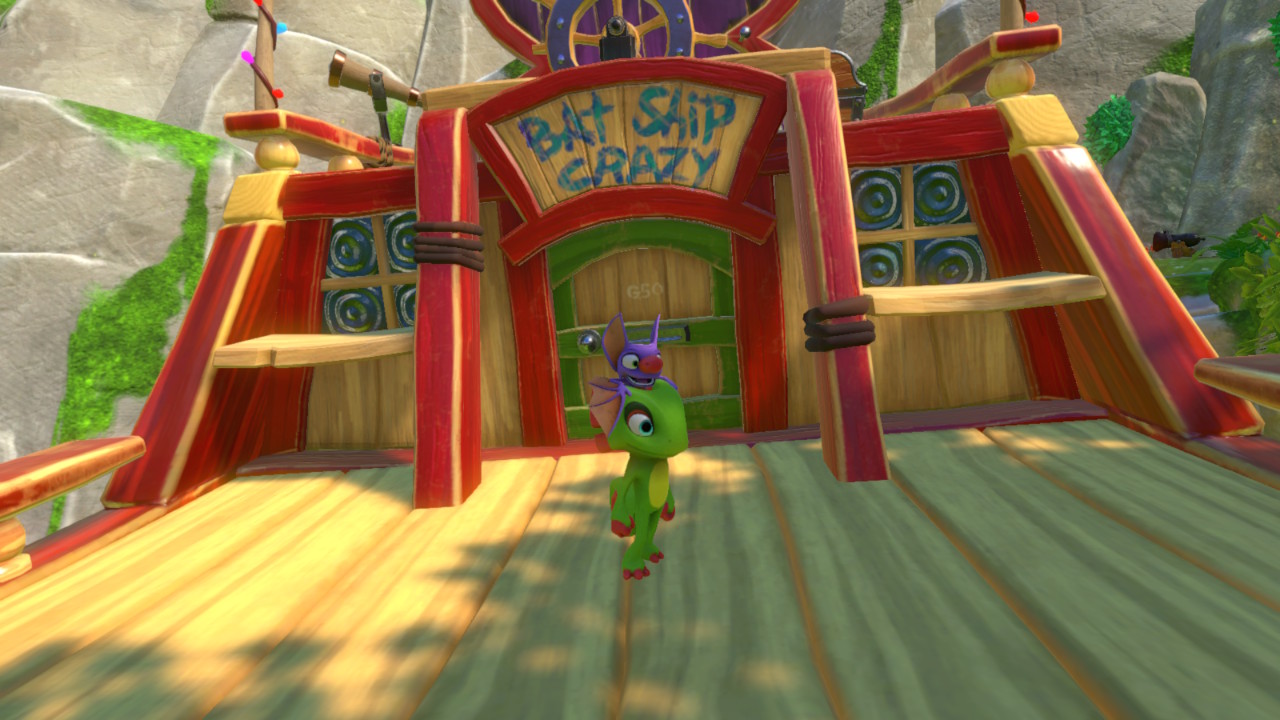 The game starts with Yooka (the green, pantless lizard-bloke) and Laylee (the purple, sassy bat-lady) relaxing and minding their own business when the book next to Laylee is sucked away into a huge, nearby factory. This is no normal book, as it is filled with gold pages – and the factory’s CEO, Capital B, intends to use this book, the magical “One Book”, to turn all of the rest of the world’s books (which he has also had sucked into his factory) into profit. This anthropomorphic book, knowing that it is under threat, scatters its Pagies throughout the world (and various others) and so Yooka and Laylee set off towards the factory, determined to recover their book and retrieve the scattered pages.

The factory, called Hivory Towers (Capital B is a bee – geddit?), serves as Yooka-Laylee‘s hub-world. There are five worlds in total to explore in the game, and these are unlocked by collecting the Pagies that are scattered throughout these worlds. To enter a world you need to find the world’s book within the hub-world, spend the required amount of Pagies to unlock it and then stand on it to enter. First impressions of the worlds within Yooka-Laylee are that they are rather small but, in a clever mechanic, these worlds can be expanded to make them much larger with the use of more Pagies.

There are twenty-five Pagies in each of the five worlds (and twenty in the hub-world), and these are unlocked by completing a variety of tasks and challenges – ranging from platforming challenges and races to boss battles and retrieving items for the game’s characters. The interactions with these characters are what feeds you the information required for obtaining the Pagies – and also leads to some humorous exchanges between our duo and the characters in question. Playtonic have not shied away from being self-degrading and fourth-wall breaking here – with the characters often making jokes and quips about how many items they need to collect and referencing other video games and gameplay mechanic. Heck, there’s a minecart called Kartos that Laylee refers to as the “God of Ore” and even Shovel Knight makes a cameo!

Although I enjoyed the majority of my run-through Yooka-Laylee‘s colourful, vibrant worlds – there were a few challenges that really grated. It doesn’t help too much that the controls felt a little floaty at times, but the timed-challenges were extremely punishing and unforgiving and the boss fights seemed a little too long – add this to the frustrating check-point system that can see you transported to the other side of the world when you die and you may find that the pleasure of playing can soon become a pain.

Alongside the Pagies, other collectibles include Quills – which are used as currency to purchase new skills from wheeler-dealer Trowzer Snake, who channels his inner Del-Boy and has a company called Trowzer Worldwide Incredible Traders (or T.W.I.T. for short…). These skills, ranging from sonar explosions to using your lizard tongue as a grappling hook, will allow you to reach previously inaccessible areas in worlds previously visited – with back-tracking playing a key part in adding to the longevity of the game. The main issue I had with this is that this isn’t signposted very well in the game, meaning that you could waste a lot of time trying to complete a seemingly impossible challenge due to you not having the required move. There is also a flight ability that is unlocked later in the game which, to me, felt a little game-breaking in that you could just fly to your destination rather than bothering with traversing the platforms that the game’s developers intended you to use. Some of these moves do deplete a power bar through use, but a combination of in-game collectibles that expand this meter and a generous helping of butterflies (the game’s health and power bar replenishers) mean that you can use them for quite a while before they need recharging. 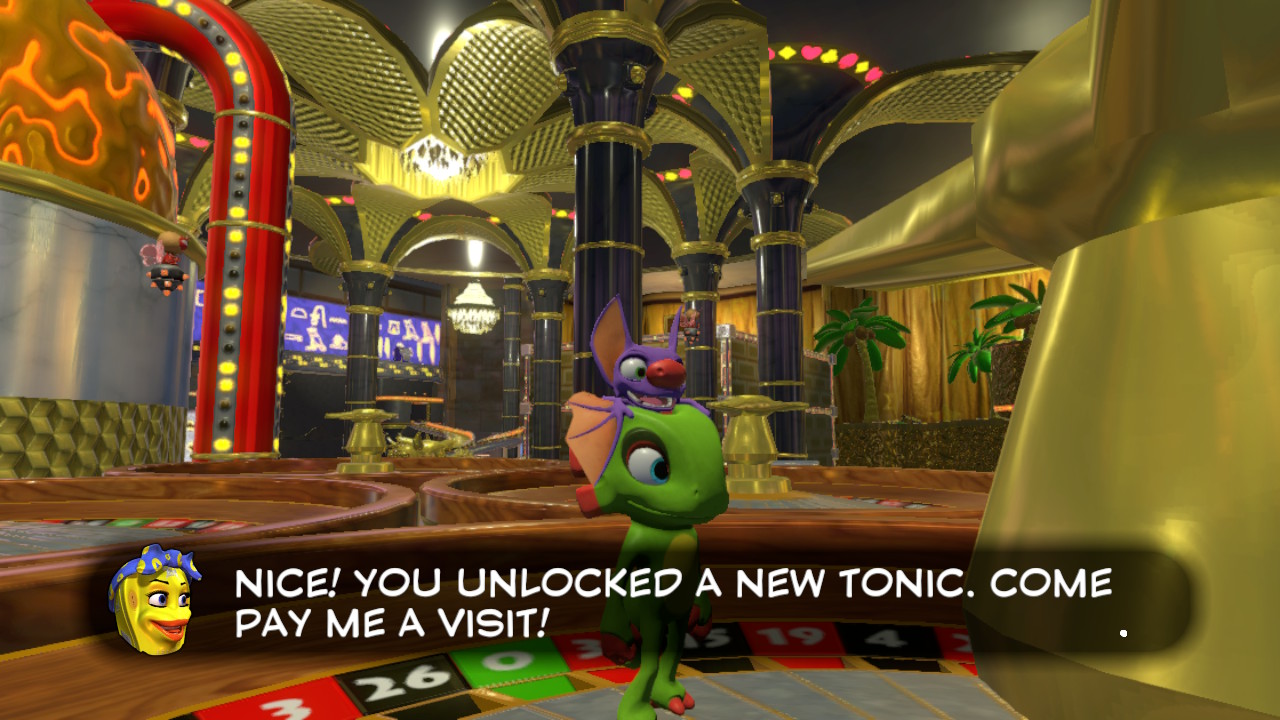 If you think that is all on the collectible front, well, you’d be wrong! This wouldn’t be a throwback to some of the greatest 3D platformers made without an abundance of the things! There are five ghost-writers in each level to be found as well as Mollycools. The Ghost-writers are a team of multi-coloured ghosts that each has its own unique trait, meaning that to catch them requires you to recognise and overcome this. The Mollycool is an item that is required to power up Dr. Puzz’s (she’s a scientist with Octopus tentacles for arms, the game is full of puns) D.N.Ray. This contraption allows our dynamic duo to transform into some rather strange objects – including a ship and a snow-plough! Finally, there are also Retro Coins which can be used at Rextro’s (a polygonal, retro looking T-Rex) Arcade. There is one arcade machine in each level, and an arcade housing all the machines in the hub, where up to four-players can play retro-style mini-games. These can be quite good fun with friends and can also be played directly from the game’s main menu should you wish to have some multi-player fun with friends!

Gameplay aside, one of the most iconic elements of the Rare games of the nineties were the awesome soundtracks. Yooka-Laylee lives up to that tradition, with Grant Kirkhope returning to compose a brilliant, chirpily catchy orchestral soundtrack that instantly brings back memories of the Banjo series. Even the way that the characters mumble and grunt when speaking will be familiar to fans.

Yooka-Laylee is a joy to play and, gripes aside, you can not help but have a smile on your face while running around the game’s sandbox worlds. From the vibrant colours and the charming characters to the delightful soundtrack and beautiful animation, Playtonic set out to make a “3D platforming Rare-vival”, and they have certainly achieved this! It’s just a shame that there are a few issues that prevent Yooka-Laylee reaching the same dizzying heights as its nineties predecessors.

The extra time taken to bring Yooka Laylee to the Nintendo Switch has been worth it. The game runs extremely well on the Switch and feels well polished. A few design issues, however, means that this spiritual successor to Banjo-Kazooie is good but not quite great!