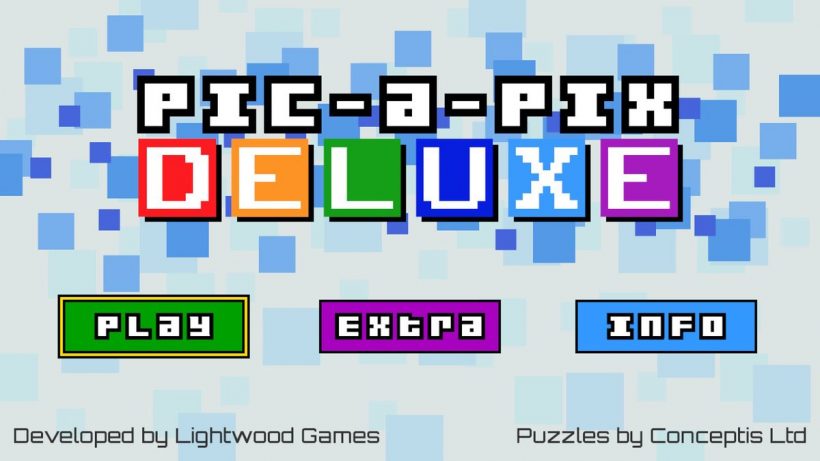 Pic of the week?

Picross and Nintendo have gone comfortably arm in arm almost since the day Nintendo started making consoles. Mario’s Super Picross was a surprise hit when it first came out on the SNES, and loads of other versions have appeared without Nintendo’s flagship mascot at the helm. The emergence of the DS couldn’t have gone any better for the puzzler, with Picross DS doing well before later being followed by the likes of the Picross e series. A couple of other titles appeared on the Wii U and 3DS eShops.

A moreish puzzler always does well, and that’s what we have here with Pic-a-Pix Deluxe. It’s probably a safe bet that most of you are familiar with the Picross concept by now. You’ll be presented with a grid of varying size, with a series of numbers located around its edges. These numbers correspond to the number of squares you have to fill in (just simply shade them in, rather than entering a number like in Su Doku). Fans of Su Doku will like this, as it’s not too far from the formula they know and love.  Multiple numbers in a row, for example a four and a two, means you must fill in four squares in succession, then leave a gap of at least one square, then fill in another two. As you work your way through the puzzle you’ll figure out that you need to match the patterns specified by the columns with those in the rows; do it right and you’ll have your picture.

Pic-a-Pix is a slight variant on the nonogram puzzle formula, as the numbers are coloured, making things slightly easier in knowing which squares to fill. It’s a fresh take on the formula, however, and it just as addictive. Puzzles vary in size and difficulty, but they’re all available from the start, so you can make this as difficult as needed from the start.

There’s not much to offer here other than diving straight into the puzzles – Piczle Lines DX had a sense of progression achievement with a mechanic which coloured in an overall picture with the items depicted in each passing puzzle, for instance – but it really doesn’t need it. The waffle which can delay the game getting under way is absent, and that’s only for the better.

You can’t really find fault with it. Like the case was with the Game Boy and the DS after it, the Switch offers a brilliant platform for puzzle games, whether you’ve just got home from work and you’re sitting down with a coffee to burst through a handful of puzzles, or you’re on a long car, train or plane journey, it’s wonderfully accessible and approachable right off the bat. There are touch screen capabilities, but you’re going to have to find some sort of compatible stylus as most adult fingers will be too big for any precision. I advise to stick to the buttons.

It’s the sort of game you’ll easily be able to convince your older relatives to get involved with too, and it might even convert them into games for good. You can see them switching a newspaper and a pen for a Switch with Picross, Piczle Lines and Pic-a-Pix on it, and that’s a valuable niche which these games are perfect to take advantage of.

At an attractive price point, the accessible nature of Pic-a-Pix Deluxe makes it the ideal title to show off to the older members of your family as a gateway to the Switch. Addictive puzzling for everyone else makes it a lovely package.

One thought on “Pic-a-Pix Deluxe Review”