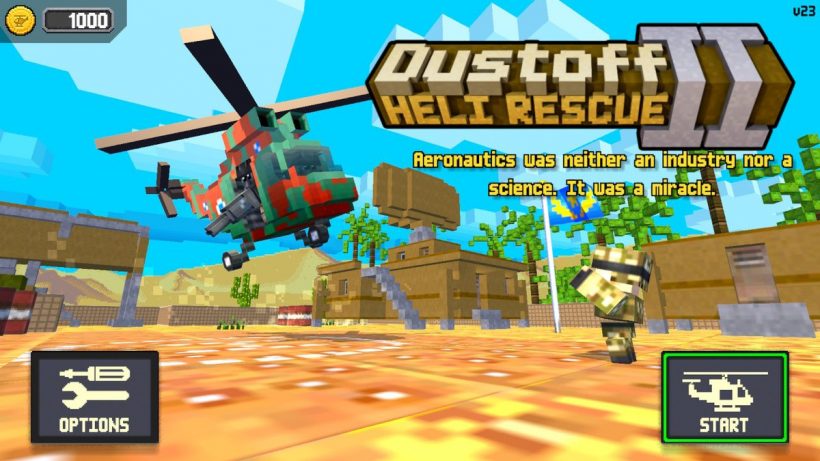 Dustoff Heli Rescue II follows a first game in the series available on PC and Mobile. I’ve always maintained that in the case of sequels heading to Nintendo’s current system, it’s much better for the developers to go that extra mile in releasing the original on the console for the Nintendo fans who will have missed it. Luckily, due to the game’s mission-based structure, there are no story aspects which will have been missed out on.

Immediately striking is the visual presentation. From the game’s opening screen, you’d be forgiven for thinking this was a Minecraft knockoff – the design for people is near identical, and environments appear to be textured out of blocks. But it’s when the game is in action that you will eventually come to realise that it’s actually quite gorgeous – it projects the Minecraft-esque foreground with a beautiful, sprawling SNES-era type background. It’s quite unique for what it is and has to be commended.

The game is all about taking an army helicopter on missions on a 2D playing field. Movement is primarily done using the L and R buttons – press them both at the same time to take off, and then press one or the other to go left or right. Pressing the control stick in any direction will amend the direction that your chopper is facing – this comes in useful for delivering attacks, as some guns are fired from the side of your vehicle rather than the front.

It also comes in important for landing, which can be a pain. It’s not enough simply to allow your craft to drop to the ground – that’ll result in a devastating explosion and a game-over. Instead, you need to tap the L and R buttons slowly to level off the heli and try to pull off a flat, slow landing. It’s often difficult to judge, and you’ll sometimes be confident of a safe landing only for the helicopter to strike a pesky tree and again burst into flames.

Missions vary from rescue missions, where you need to collect ground troops and return them safely back to base, to attack-based missions, for example protecting a friendly convoy from an oncoming attack. It’s a great concept and a lot of fun, but I would have liked a little bit more control over the attacking. As you have no real control over your guns, other than positioning your aircraft to be able to shoot, you’ll need to be attacking using a series of swooping motions rather than consciously lining the enemies up to gun them down. Hovering still in one place in the air leaves you a dead duck for incoming attacks, and since everyone seems to have access to anti-air weaponry, that’s not where you want to be.

You can scramble to landing points where you can replenish your health and ammo at a cost – though I would have liked to see a bit more emphasis placed on the action rather than scampering back for more health after every few swoops.

Levels get some replayability with collectable dog tags, and some are tough to get, being high up out of reach or near a group of enemies that need to be cleared out before you get near.

I can recommend this game. It’s something a little different offering a new gaming experience, and that’s what the eShop is all about.

While it would have been nice to see both Dustoff games in this package, there are loads of levels here to keep you going. Chances are you’ve not played much like it, so it’s definitely an eShop title to try.