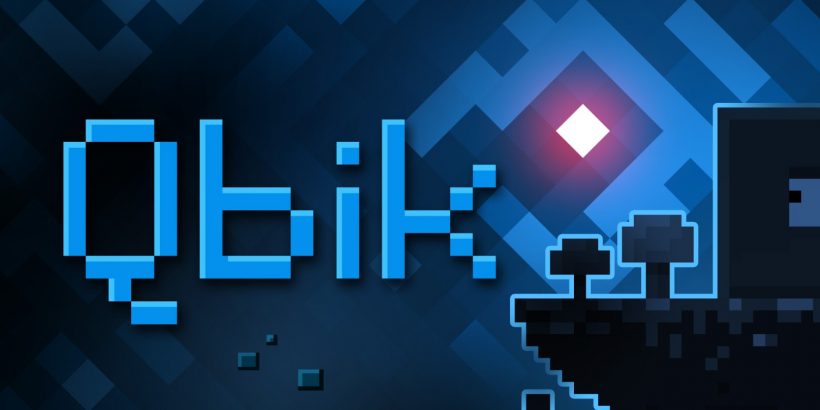 It’s time for another minimalistic puzzler on the Switch eShop. It’s not a genre that the Switch has lacked in any way, shape or form over the last twelve months, but what does Qbik offer that the rest don’t?

This puzzler adds a bit more of a tactical element to a Dig Dug, for a lack of a better description. In short, the aim of the game is to take your one-eyed block character across the stage through vertical and horizontal movements to eat blocks of a certain colour along the way. As far as puzzling concepts go, you couldn’t come up with anything simpler.

But it’s not quite as simple in practice. You need to plot out every single one of your movements carefully or you’ll leave a block or two out of reach. Qbik can’t travel upwards – it can go directly underneath blocks and swallow them from below, but that won’t propel him upwards. There will be cases where some of the blocks are on solid surfaces, so with no means of heading back upwards in a level, you’ll soon realise that you’ve missed your chance to gulp it up.

That’s where the X button comes in handy. Pressing it undoes your last step, all the way back to a full reset of the level from scratch.

The game takes note of your number of rewinds, pushes, distance covered and teleports, so you will feel guilty for moving backwards. That’s a bit mean. In fact, the whole difficulty overall is pretty mean. It’s not the sort of game which kids will be sticking around to continue playing because you’ll often really need to think hard about how you have to move. You’re given a very limited number of level skips, but when I found myself flummoxed within about five puzzles, it’s clear to see that people with shorter attention spans are going to have trouble.

The developers have done their best to inject as much personality as they can into Qbik – the square sometimes injects its thoughts and opinions on the surrounding environments, while signs dotted around the levels also interject some sort of characterisation. Qbik makes remarks at your rewinding and failures, and serves just to wind players up – which as we all know always makes things more difficult when a game requires the utmost concentration.

The fact that it’s tough to find any sort of walkthrough online for this game is always a bonus – but you get the feeling that’s because this game is so challenging that nobody’s completed it yet. There are 63 levels in total here, which is going to take ages and proves an excellent return in terms of bang for your buck.

The inclusion of touchscreen functionality while in handheld mode is certainly welcome, but it’s not something which causes any major problems when playing docked. An option to design your own levels works perfectly in this sort of game too, particularly when you can see your friends’ frustration and appreciate levels rather than be infuriated by them like normal.

It’s a moreish game, but not as moreish as the like of Pic-a-Pix Deluxe or Piczle Lines DX. For puzzle game fans it’s very easy to recommend Qbik, but for kids and more casual players, I’d recommend those first two.

It’s minimalist, but it is challenging. Qbik is a game that requires a lot of thought. If you dread games where your brainpower is fully engaged, it won’t be for you, but otherwise there’s no harm in giving this a go.