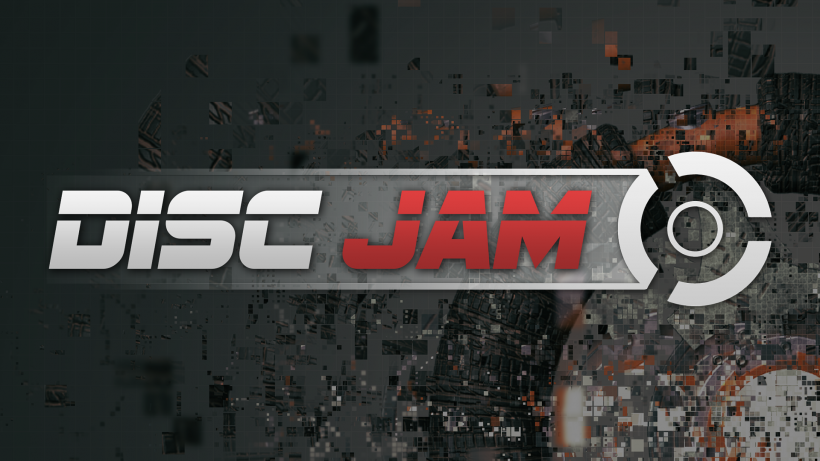 I’m spinning around, move out of my way.

Almost a year after its release on other platforms, Disc Jam from High Horse Entertainment has gone handheld. When I get competitive in games, I usually yell quite loudly. I yelled playing this one, and I’d say that’s an indicator of success for what can only be regarded as a sports game following in the footsteps of Rocket League.

Disc Jam is a somewhat futuristic-looking sports game that combines the chaotic, ricocheting unpredictability of Air Hockey with the frantic dashing and placement strategy of tennis. Much like Rocket League (a game that it clearly draws a lot of inspiration from in terms of its matchmaking, ranking system etc), it’s easy to pick up and play, but grows increasingly difficult as you rise up through the games’ simplistic yet rewarding score system. The focus is on online competitive multiplayer, in both singles and doubles matches (both with individual ranks), but there is also a ghost match option that allows you to train all of your different abilities up whilst earning points to spend on customisation. You can even interact with your opponents using the D-pad to send them little pre-written messages. “I’m rattled!” was a personal favourite of mine, because I was usually rattled.

Playing this game had my palms sweaty (knees weak, arms heavy) and my grip tightened, anticipating every movement on-screen and sliding in the hopes that I would meet the oncoming disc in mid-air. The flow and feel of gameplay is crucial to this sort of game, and I think High Horse have achieved a smooth, gratifying experience that easily lulls you into that infamous “one more match” mentality. With curve shots, super shots, reversals, slides, throws and blocks, there’s plenty to get stuck into here, and it really does feel awesome scoring a goal past your opponent. There may be some shortcomings in other areas, but some good fun is here and ready to go if you are, and I would say that is the most important factor in what Disc Jam is trying to achieve.

Disc Jam nails the sort of addictive, competitive gameplay that you would expect, but the presentation is really boring. In a game where you’re jumping in and out of matches, and repeating the same things over and over in order to rank up and increase your skill, variety is something you don’t know how much you miss until you’ve heard the same stock rock song for what can seem like an eternity. There are various customisation options, but none of them are particularly interesting, and with only one generic court the overall look feels bland and forgettable, unlike Overwatch for example (as a different competitive game) which has stark and vibrant characters and settings.

As a whole, Disc Jam is a welcome addition to the Switch library, and it’s great to see another game with cross-platform, online competitive multiplayer that performs smoothly in both handheld and docked modes. If you like the look of this, it’s worth a shot. Perhaps just remember to bring your own music playlist along.

The audio and visuals get boring fast, but at its core Disc Jam has addictive, solid gameplay, and with competitive cross-platform play, it’s definitely worth a crack if you like the idea and want a break from Rocket League.