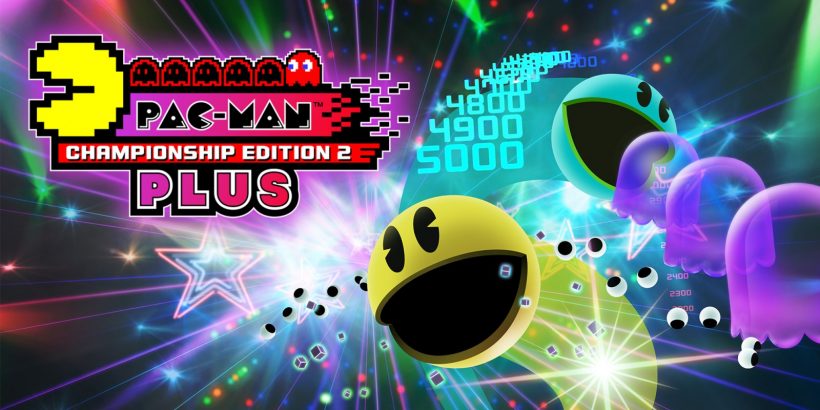 Pac-Man is one of the most recognisable and enduring video game franchises of all time, with the dot-munching hero entertaining gamers since 1980. Ask around and I’d wager you’ll struggle to find anyone who hasn’t at least heard of it over the years – it’s certainly up there with Mario and Sonic as one of the tent poles of the gaming industry. There have been countless sequels and spin-offs since the original’s release, all of varying success and quality, but with Pac-Man Championship Edition 2 Plus, gamers can enjoy one of the strongest entries in the storied franchise in years.

Pac-Man Championship Edition 2 Plus is one of those rare sequels that successfully manages to retain the core appeal of the original title whilst simultaneously expanding on it in meaningful ways. Much like the Pac-Man games of old, your primary goal is to navigate a series of top-down mazes and collect all of the dots scattered throughout, all the while avoiding the dreaded ghosts that stalk you along the way. The main difference with this entry is that the gameplay has been sped up to an almost ridiculous degree, turning what should be a fairly simplistic endeavour into a tense, nail-biting ride that just gets better and better as it goes on. 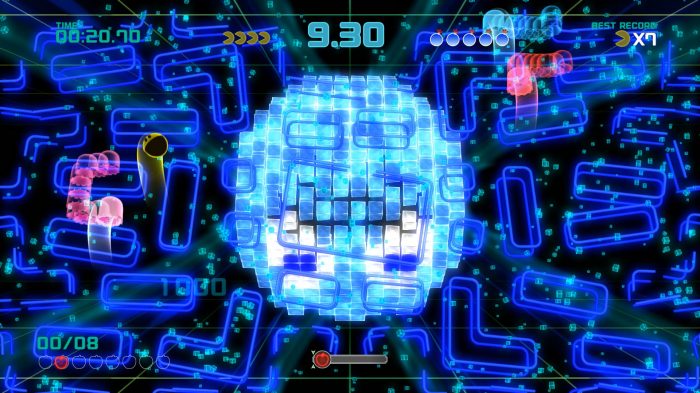 Each level is split into bite-size chunks, with progression occurring once you collect all the dots in a particular maze. As you move onto the next section, the speed of the gameplay increases. The levels themselves are set out immaculately, with sleeping ghosts stationed throughout. As you move past the ghosts, they wake up and start to form an ever-growing chain, moving throughout the levels. Interestingly, the game is actually quite lenient on the player if you come face to face with the ghosts. You can actually bump into them without incurring any damage, but should you hit them too often, they’ll morph into a bigger adversary that will immediately kill you if you run into it. Eventually, should you successfully clear a certain number of sections, you can pick up a power dot that allows you to gobble up the ghosts in glorious fashion, with the camera zooming in on the action to give you some spectacular views. This process repeats until the time runs out, giving you an overall score and rating at the end. The desire to go back and improve your score is irresistible, and a large part of what makes the game so great. 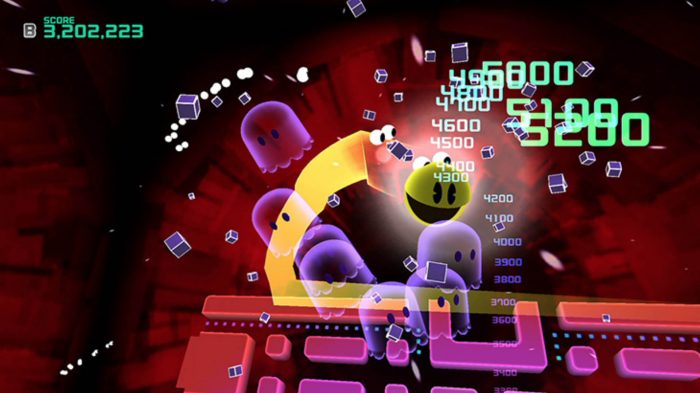 Along with the core Score Attack mode, you also have Adventure Mode. This section doesn’t deviate too much from the core formula showcased in Score Attack. You’re tasked with completing a series of objectives throughout a bunch of mazes. Should you complete these to an adequate degree, you unlock the boss battle. Again, these sections more or less showcase similar gameplay, but you’ll have a huge ghost to contend with that will send out minions to attack you. It’s a decent mode, but I’d pick Score Attack over it any day. Finally, you’ll also have a full co-op mode to play around with. Working with a partner, you’ll need to avoid the ghosts entirely if you wish to survive – no bumping into them here. It’s also worth noting that the game’s visuals can be altered in any mode to your preferred style, which is a lovely little touch.

Pac-Man Championship Edition 2 Plus is a fantastic evolution of the core Pac-Man formula, delivering addictive gameplay at blistering speeds. With such a sharp focus on high scores, I guarantee you’ll be coming back to this one again and again.