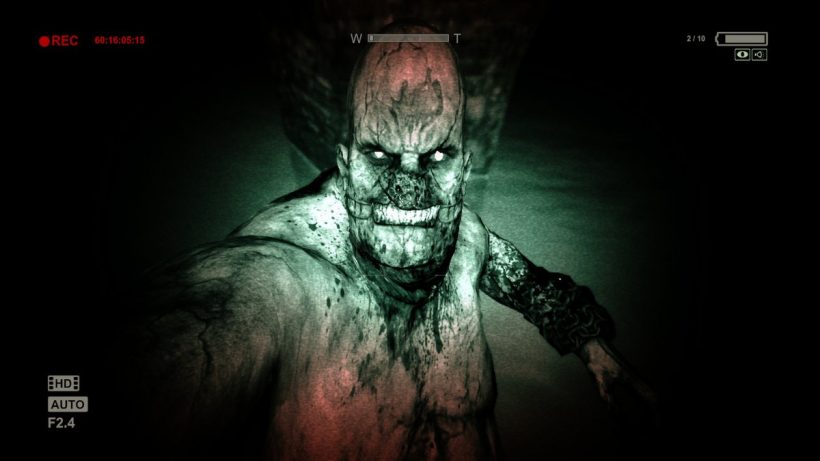 It really did come out of nowhere – I barely even remember it being confirmed before it made its sudden appearance on the Switch’s eShop last month. It’s fitting, then, that Outlast, which was released to great acclaim on other formats, brings a whole host of shocks and jump scares to the Switch’s library.

This version blends the original game in the series with its DLC to form the Bundle of Terror, and at £20 it’s not a bad price for such a big-name title.

You’re given no weapons at all; only a camcorder to record your exploration through Mount Massive Asylum. If you played Slender: The Arrival on the Wii U, it’s the same sort of premise – your input is on the exploration, and the legging it to escape the scares and conflict rather than having the option of heading in there all guns blazing. Here, you’re playing as a journalist who’s trying to get the scoop on reports of seedy goings on with the patients in the asylum, and the scares kick off almost immediately, as soon as you climb into the asylum through an open window there’s no turning back.

You’ll need to rely on batteries to get your camera to illuminate darkened rooms, which brings a sense of urgency to the game and instils a powerful and effective conflict – not knowing what’s in the murky darkness prevents you from wanting to enter the room, but once you make that leap, you know that you’ve got to make headway pretty quickly while you still have battery power left or you’re going to have to explore the scene completely blind.

The execution of the atmosphere in the game is just fantastic. Get the lights turned off and play this game at night for the optimum experience – it’s survival horror at its most vulnerable. The whole thing is a game of cat and mouse from start to finish, and you always feel like your back is to the wall, but it doesn’t feel rushed in terms of its execution. Storytelling is done well, blending characters who seem barely alive with those who pull the strings for feelings of good and evil, as well as undead and alive.

Each of the characters, even those who have fallen into numbness due to the experiments, feel like they could do you some sort of damage, so you always feel the need to tread lightly when entering rooms with other characters in. Things get even scarier with enemies who give chase when they spot you – you’ll need to be aware of your surroundings to leg it out of their range. Your background story for the people encased within the asylum is delivered through some cutscenes but mostly in the form of optional collectible notes and documents – I’d advise you pick them up when you come across them, as they really work well to stimulating your imagination and heightening the terror.

Fortunately, if you do get caught, in most cases you’ll have chance to run clear of danger after one blow, but don’t go overdoing it. Things like lockers and beds provide opportunities for hiding places, and when you see one you’ll need to take the hint that you’re likely to need it in the not too distant future. It would have been nice if the button prompt didn’t appear when near these places, mind – leaving the player to use their initiative to figure out where these places without being quite as in-your-face about pointing them out would have added more to the immersivity of the experience.

That’s not to say that the game doesn’t do subtlety well. A nifty idea of using blood spatters to show you the way is inspired, and just feels like a logical way of subconsciously telling the player what to do without hitting them over the head with a mallet to remind them that they’re playing a game and stopping you being fully engrossed in the experience.

Sound plays a great part in adding to the atmosphere again. Whether it’s footsteps alerting you to impending danger, or even better, when your camcorder’s batteries have run out and you need to hide away, sound is your only indicator as to where the beings are around you. The other key bit of sound which works to affect the gameplay is the breathing of your main character, Miles Upshur. He’ll sometimes break out into uncontrollable gasps, which are not only deeply unnerving as you’re doing your best to block out the fear from your mind as you proceed with your exploration, but also disorientating as they can sometimes overbear the other sounds emanating from within the asylum, giving you an increased sense of vulnerability.

Visually, it’s noticeably not as crisp as veterans of the game might have been used to while playing on other systems. But, if like me your first playthrough is on the Switch, that’s not going to make an ounce of difference. The experience is certainly not worse off for it – besides, what’s really the crucial element to your enjoyment of a survival horror title such as this is your imagination – if your brain is working overtime visualising the horrors that could be in the next room, or bearing down on you through the corridor that you just passed through, that’s what’s going to mess you up in the best way possible.

It’s incredible though that the developers have managed to squash this down into a handheld game for on-the-go fun with Switch. Like the likes of Breath of the Wild and Skyrim in the last year, it really is a stark reminder of just how far handheld gaming has come, and highlights just how unique the Nintendo Switch is in terms of the playing experience that it can offer.

If you’re a Nintendo fan and have no experience of the Outlast series due to your loyalty to the cause, I can’t recommend picking it up enough. Lots of scares, immersivity and atmosphere are always the crucial ingredients for any good survival horror title, and the game is one which does manage to stick in the mind for a long time afterwards. Great work by the developers, and great work by Nintendo for getting Outlast an exciting new home.

Regardless of any slight graphical downgrade from other systems, the full Outlast atmosphere and performance levels are present and correct in this excellent package. It’s a must for the collection of any adult Nintendo fan.