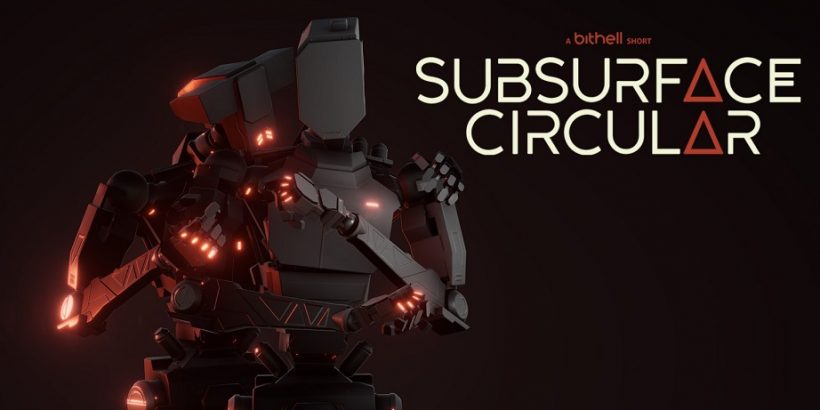 From the moment Dan Le Sac’s thumping, yet contemplative, score blasts into your eardrums as you witness one of the slickest and minimalist sci-fi opening credits, you know you’re in for something special.

Mike Bithell has made a name for himself – literally – with the past two games he has helmed since venturing out as an indie developer. Subsurface Circular is the third game to bear his name, but the first to be referred to as a “Bithell Short”. This is proudly emblazoned on the games cover art and during the opening credits, and rightly so. This is a short experience, only around a couple of hours. But this has enabled a singular focus to be expertly crafted and one that can be played in a single sitting. 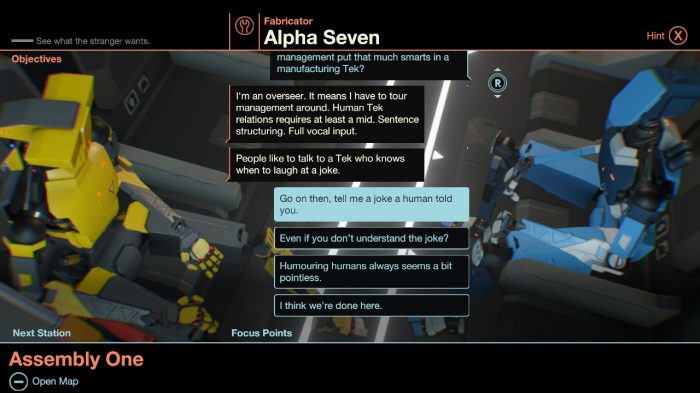 Subsurface Circular sees you take control of a Tek (the name of the robotic subclass in this futuristic depiction of Earth) that has been programmed as a detective. You spend the entirety of the game in a single train carriage as it travels along the Circular line of the Subsurface rail system. This might sound terribly limiting, but it is the diverse cohort of Teks that you meet in this carriage during your time that livens things up.

Everything revolves around dialogue and communication. You start the game without any overarching objective, but via communicating with another Tek an investigation presents itself before you and the only way you’re going to solve it is via interacting with any and all Teks that happen to grace your carriage. 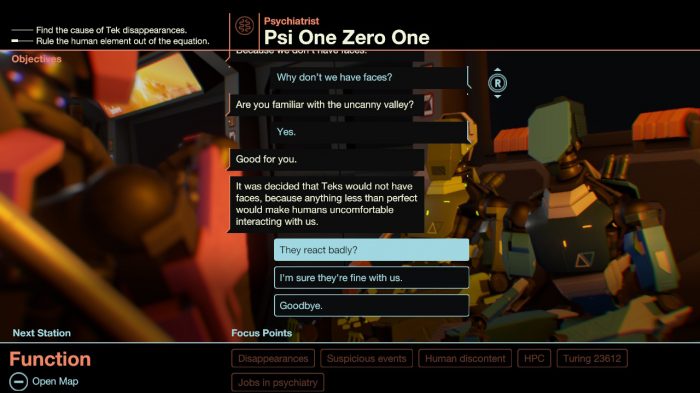 Bithell and his team wanted to create a text adventure game but utilising contemporary audio and visual elements to contribute to the storytelling. Therefore, almost everything you do in the game utilises a text box interface. You unravel more of the conspiracy via your conversations with fellow Tek passengers using these text boxes. You’ll soon find yourself putting the additional processing power granted to you as a detective to use as you solve puzzles necessary to coax an answer out of an uncooperative Tek. The text approach makes sense not just from a gameplay perspective, but also within the logic of the in-game world. The Tek can communicate privately without needing to do so audibly, so it makes sense to visualise it this way, as a similar process is likely taking place within the Tek’s systems. This has the added benefit of reducing uncertainties that come from the “noise” generated from the nuances of verbal communication. 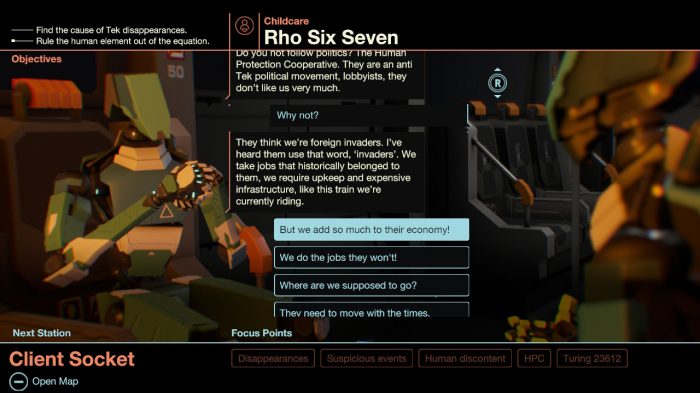 As a game all about text, one would hope that the narrative would be interesting enough to keep you engaged; and it certainly succeeds here. The individual Teks you meet are interesting enough on their own, but it’s the underlying conspiracy that is the real draw. At first, the investigation is rather obtuse but soon subtly increases in clarity and intensity. What stands out about the process is that Subsurface poses questions reflecting upon significant concerns of today; regarding immigration, individual rights, industrialisation of labour, and the advancement of AI and robotics. Yet the game doesn’t preach its preferred point of view, instead, it provides multiple answers, leaving it to you to decide for yourself how to interpret the political landscape.

Subsurface Circular is a finely crafted compact experience. Everything about it shines, from its retro-futuristic design and intoxicating soundtrack to its carefully considered text and narrative. This is truly a game where style and substance are perfectly balanced.