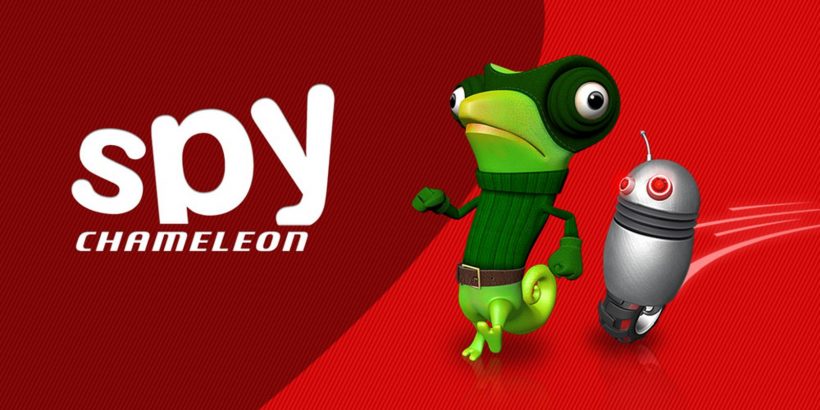 In my 20+ years of gaming, I’ve developed a particularly strong affection for one genre – stealth. Starting with the acclaimed Metal Gear Solid series, the act of sneaking through heavily guarded environments without being seen often feels like a type of puzzle to be solved. It actually makes you feel powerful in a way that straight up action titles couldn’t hope to achieve. These games have only gotten better in time, with franchises like Hitman and Deus Ex ranking among my favourite of all time. Quirky indie title Spy Chameleon is an admirable attempt to focus stealth components into short, bite-sized levels, but ultimately fails to provide any kind of challenge.

You star as an adorable colour changing chameleon who must find his way through multiple rooms guarded by cameras, robots and various creatures. The cameras provide the most consistent challenge throughout – they display a cone of vision that you must avoid in order to remain unseen. These cones will pan across the room, and you’ll need to be mindful of your timing whilst moving if you’re to succeed. During latter areas of the game, robots and other enemies also display cones of vision, but they also patrol around the area at the same time. 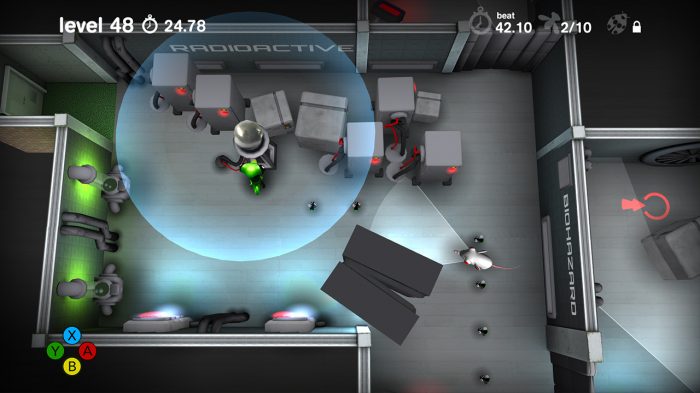 Thankfully, the chameleon’s ability to change colour makes things a bit more interesting. If you’re on a red rug, you can change your character red and effectively blend into the environment, rendering the cameras more or less useless. Utilising this ability is essential during latter stages of the game, as the amount of obstacles in your way increases as you progress.

The game also throws variations of the blending ability as you progress – you might come across a room that may initially be devoid of any colour other than a handily placed pot of paint on the floor. Knocking over this pot will cause the paint to spread over the floor, allowing you to blend into it by changing into the same colour. You can also use cardboard boxes to hide, which is a clear nod to the aforementioned Metal Gear series. 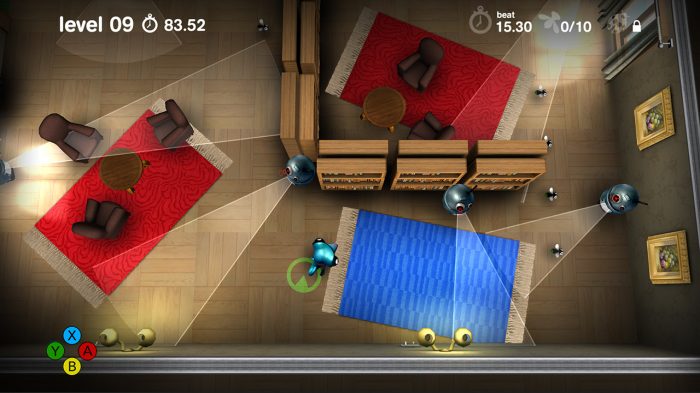 The game boasts an impressive 75 levels to navigate, but unfortunately it never got challenging enough to remain engaging. The rooms remain largely similar in design, and sadly repetition kicks in sooner rather than later. There are additional objectives to perform in order to increase your reward, such as collecting flies scattered around the room (admittedly some of these are placed in quite devious positions and require sharp skills to collect), but it’s not enough to keep me fully invested. To be brutally honest, it feels a lot like a free mobile game.

Spy Chameleon is also fair rudimentary in the way that it looks. Visuals are not particularly impressive, but really, they don’t need to be. The action is displayed via a top-down view, and colours are mainly limited to red, green, yellow and blue to go along with your chameleon buddy’s blending ability. The in-game lighting can be fairly impressive at times, with windows allowing the sun’s rays to brighten up the immediate area. Unfortunately, this fails to provide any impact on the gameplay itself, which for a stealth game, is a real shame.

Spy Chameleon is a decent puzzle stealth game with a fun central mechanic. Sadly, it fails to maintain enough of a challenge for the vast majority of players.