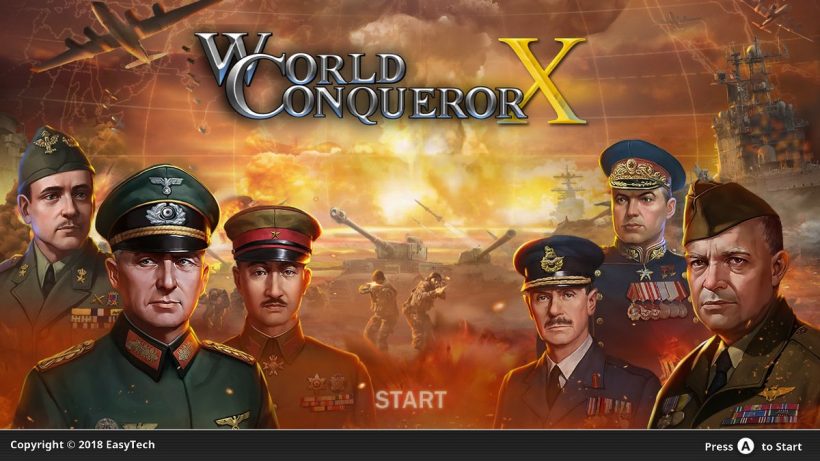 A lot of world to conquer

World Conqueror X is one of those games which surprises you with how much it hides within. There’s a surprising number of content under the game’s hood, given that to the naked eye it looks like a more modest eShop offering.

The map is made up of hexagons, impacting your ability to move your units to your desired space. As is the case with so many strategy games of this ilk, you have a set number of spaces allocated to each unit as far as moving them goes, so you’ll need to first plan where you need to be in order to avoid taking damage, then balance that with a great spot for being able to dish out the punishment on the other end. In addition to smashing up enemy infantry, you’ll need to try and take towns and cities.

The battling action isn’t limited to the troops that you have out on the field. You can make use of other facilities at your disposal, including captured cities which have airports from which you can unleash paratroopers, fighter jets or bombers, or if you want to go the whole hog with causing maximum destruction, you can use nuclear bases to unleash atomic and hydrogen bombs, quite the overkill given the lack of perceived threat that the game offers.

Terrain also impacts the battle – build a navy for water-based battling, and lay mines to stop the enemies in their tracks as they advance towards you. Of course, with all of the enemies having health meters, you’ll have to suspend your disbelief when they withstand direct hits from big explosives, but at least it offers a noticeable differentiation from the gameplay, which would otherwise by restricted to simply selecting a space to move into before firing some shots to slowly and tediously pick away at the opponents’ health bar. Watch the morale levels of both you and the enemy – that can be the difference between victory and defeat if used effectively.

As someone who is often put off by games of this genre due to the deluge of stats and figures you get drowned in which can be so difficult to stay on top of, World Conqueror X does well to hide these in less threatening positions. Tutorials are quick and relatively easy to follow – though they don’t really give you a comprehensive enough baptism of what the game will require in its later stages, from the fine-tuning of upgrades to the intrinsic tactics that can be used as a result.

The game’s main modes offer a decent level of variety. The first, Scenario Mode, offers bitesize chunks of battling, with smaller missions encompassing all sides of the Second World War, allowing you to try to pull off successful historical missions. Consider this the appetiser to Conquest Mode, which has you pick a country and stick with it, then playing out from 1939 or 1943 with them, bringing your ally countries into play with diplomacy tactics and trying to win the war. This is a huger mode by comparison, with battles lasting so long you start to think they might be playing out in real time.

Strategy fans will slide into World Conqueror X with little problem and get a good war experience out of it. It’s maybe just a little too much of a learning curve for those with less experience.

World Conqueror X offers a lot of content for its modest eShop price, and history fans will enjoy playing out a story which sticks as close to real-life as possible. It’s not the most welcoming gameplay system, though, so novices may want to look elsewhere.