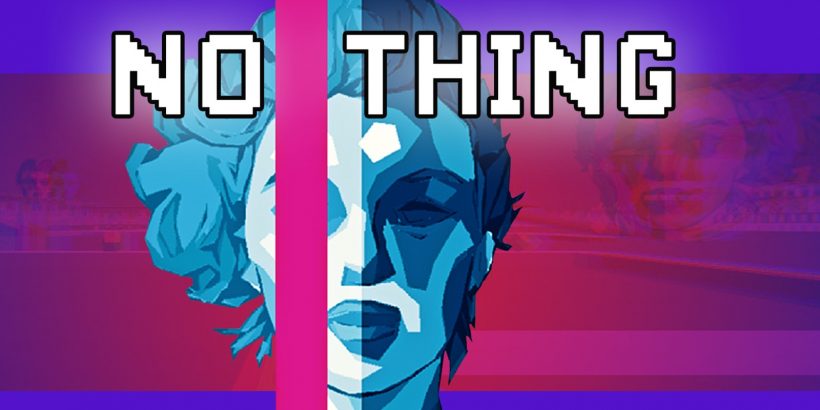 Coming from developer Evil Indie Games, NO THING has arrived on Switch for only £1.79, and at that price it’s hard to say no based on the cool looking screenshots alone, especially with the new Nintendo points system. But, allow me to elaborate…

NO THING is a first-person action game that evokes the same sort of hypnotic gameplay draw as rhythm game Thumper, and yet it isn’t music-driven. Aside from flashing various interesting visuals in an attempt to distract you (alongside the glitching, pixelated effect and colour changes), it’s a simple but addicting title that sees you running quickly and turning to avoid falling off an oncoming maze of platforms. It’s also really difficult.

The first person perspective and harsh right-angle turning (which embodies the crux of the simplistic, ‘easy to play but difficult to master’ gameplay) reminds me of 90’s dungeon crawler games and the way that they constructed their 3D environments, and it’s a cool, abstract effect that  developer Evil Indie Games describe as ‘retro surrealistic’. The right-angle turning also very much reminds me of the Light Bike scene from TRON, with the robotic commands and visuals helping to envelop you into this transient state of utter concentration before inevitably plummeting to your death for the thousandth time.

Story-wise, you play as an office clerk who has been sent to deliver a message to the ‘Queen of Ice’, and I have as much idea about what that means as you do. In fact, prior to reading the information on the game’s site, I didn’t have a clue that this was even the story in the first place. There is a robotic voice that blurts out abstract commands as you dash, contributing to the futuristic vibe of the game, but they make no sense, and it’s difficult to pay attention to the text at the bottom of the screen when you’re so intently focused on the hypnotic gameplay. Not that this matters, as this sort of twitch-based action common in an arcade or quality mobile game is not usually reliant on narrative, and NO THING is no exception.

NO THING is, in theory, a short game, but expect to be repeating the same split-second movements again and again ad nauseam, and dying frequently in a trial and error trance. The Switch version does give you free reign over the controls, allowing you to use the analogue sticks, D-Pad, shoulder buttons and even touch screen to execute the two simple moves your character has (you guessed it – left and right), but these are ultimately futile tools in what is an endurance test of both skill and patience, and I was often short of both. My Switch is still in one piece as of yet (or three I suppose, if you’re counting the detachable Joy-Con factor).