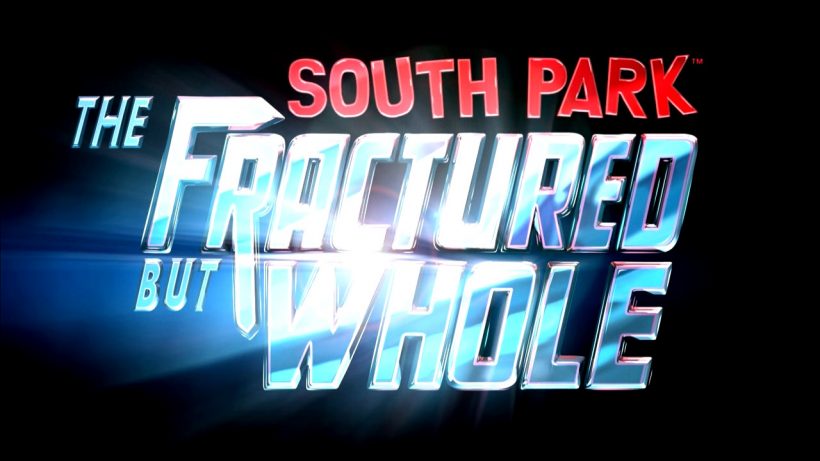 Over the last twenty years or so, South Park has, at times, been quite culturally significant. The way the episodes were made allowed the creators, Trey Parker and Matt Stone, to fashion narratives around events as they happened – one that immediately springs to mind centered around the Nintendo Wii. Now this title’s timing is more coincidental; it originally released on other platforms in 2017 but its release does time well with the release of Avengers: Infinity War and it couldn’t be more perfect.

Never one to shy away from the controversial, South Park returns to Nintendo in the latest title, The Fractured But Whole. A direct sequel to The Stick Of Truth, those fouls mouthed youngsters move away from fantasy and instead, this time, see their title themed around Super Heroes. Or, more specifically, Super Hero Film Universes, like the Marvel Cinematic Universe or DC’s equivalent. 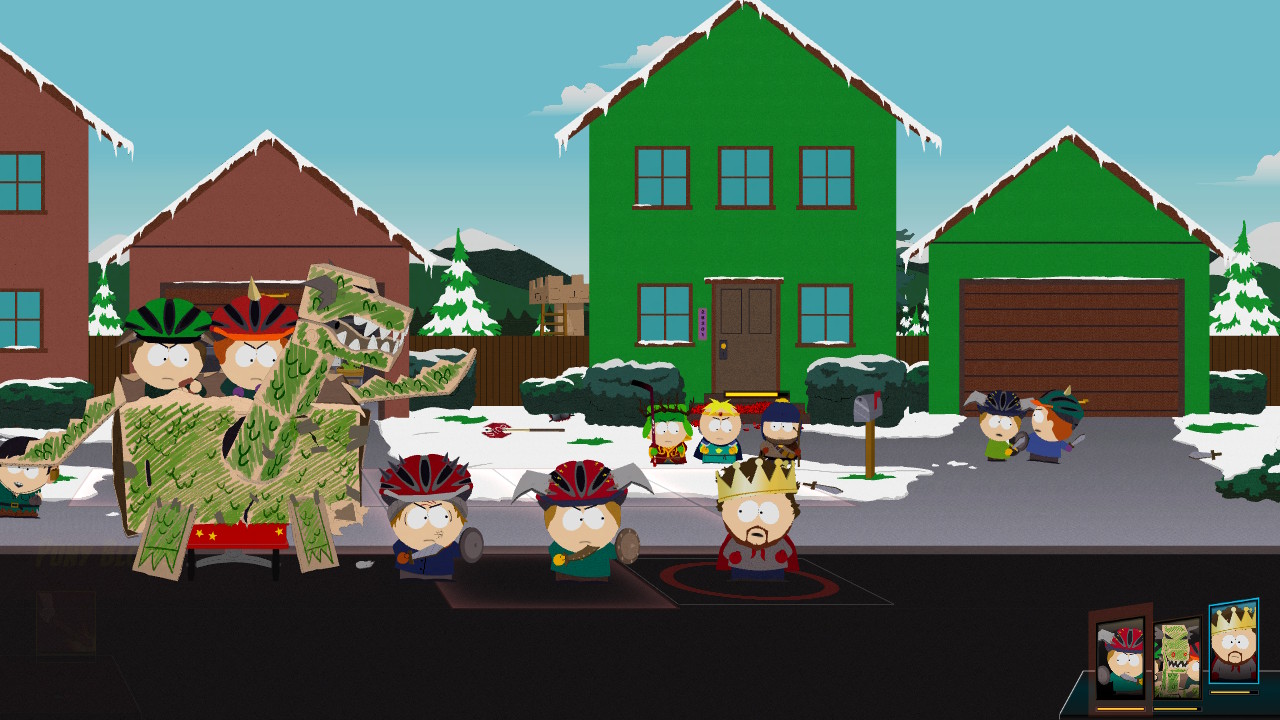 Eric Cartman (in his guise as “The Coon”) sees a world where all of his super hero friends can star and feature in their interconnected universe, with cross-overs, sequels and Netflix serials, the only problem is a lack of financial investment. As luck would have it, a missing cat reward could just be the ticket – and sets you on an incredibly long, deep and shocking adventure set within the television shows surroundings.

You don’t play as any of the regular characters, though, instead you take on the role of the new kid as he attempts to make friends with the other children and integrate into their “game”. You are blessed with abilities, one being able to get people to engage with you on social networks and the other is an ability to fart, with spectacular (if somewhat immature) results. 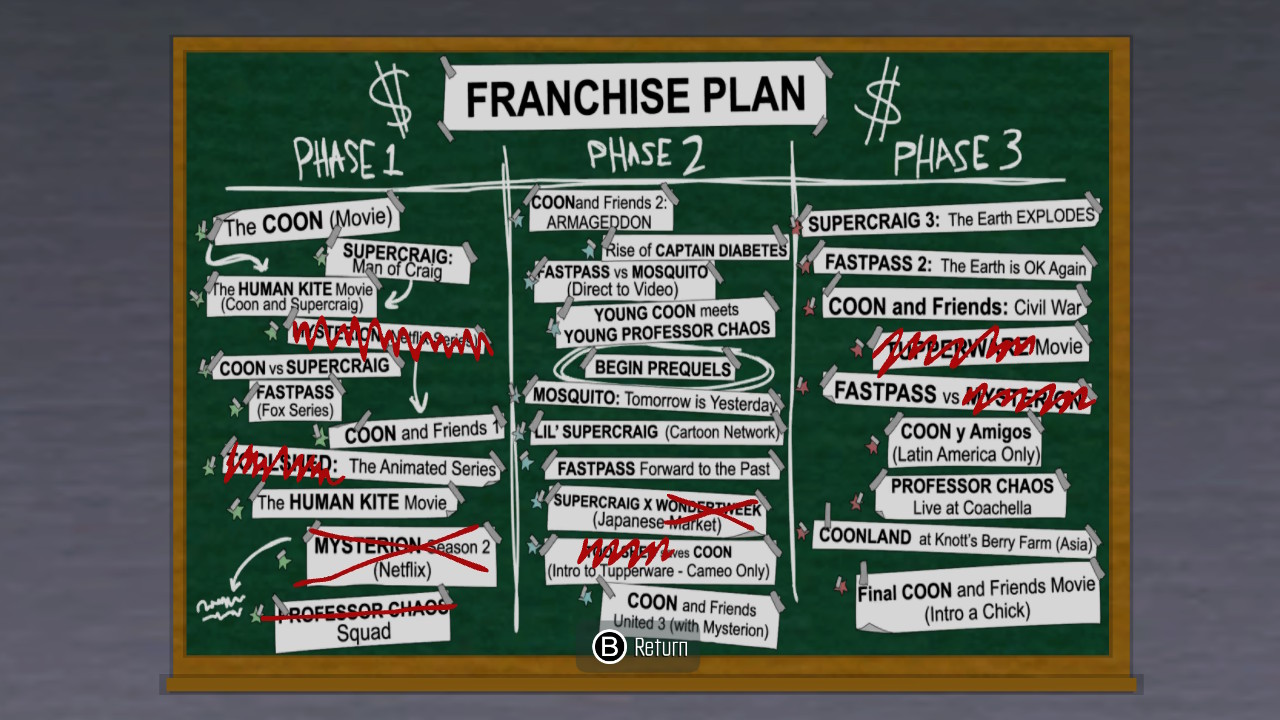 Oh yes, this is an incredibly silly, outrageous and somewhat offensive adventure although it shouldn’t be a surprise to fans of the show. For those that aren’t aware of it (where have you been?), be warned: this is not for kids. On top of some outrageous language (lots of F-words), some too close for comfort dialogue and some distasteful locations (kids in gentlemen clubs, gyrating with gentlemen) it’s also incredibly violent. Standard South Park stuff then…

South Park The Fractured But Whole is an RPG at its core, with you (as the new kid) interacting with various characters in a variety of missions. Initially, you’ll be on the side of Coon and his friends, who have all adopted a variety of superhero guises as you race against another faction, The Super Friends – whose leader is Timmy, the wheelchair-bound character who plays out a role which is essentially Professor X. As you progress you find yourself in conflict with enemies and these battles are played out in a turn-based manner. Your character develops different classes and abilities as he progresses and you can customise your squad based on who you have available, taking turns to defeat your foes before progressing to the next mission. You’ll gain experience and unlock new “artefact slots” which enhance your abilities and might; and might is the gauge to which missions are set. It’s only a guide but you probably don’t want to be taking on a mission higher than your abilities!

As you attack (or defend), you’ll also build up your ultimate meter, and once charged allows the execution of spectacular special moves, which can often turn the tide of battle. Think drone strikes, hulking out, super speed, lasers and much more over-the-top shenanigans. You also get character based (one use per battle) attacks, like Jimbo and Ned declaring that “it’s coming straight for us” and opening fire indiscriminately. Or a hooker driving her car at your rivals before leaving them for dead in a hit-and-run. 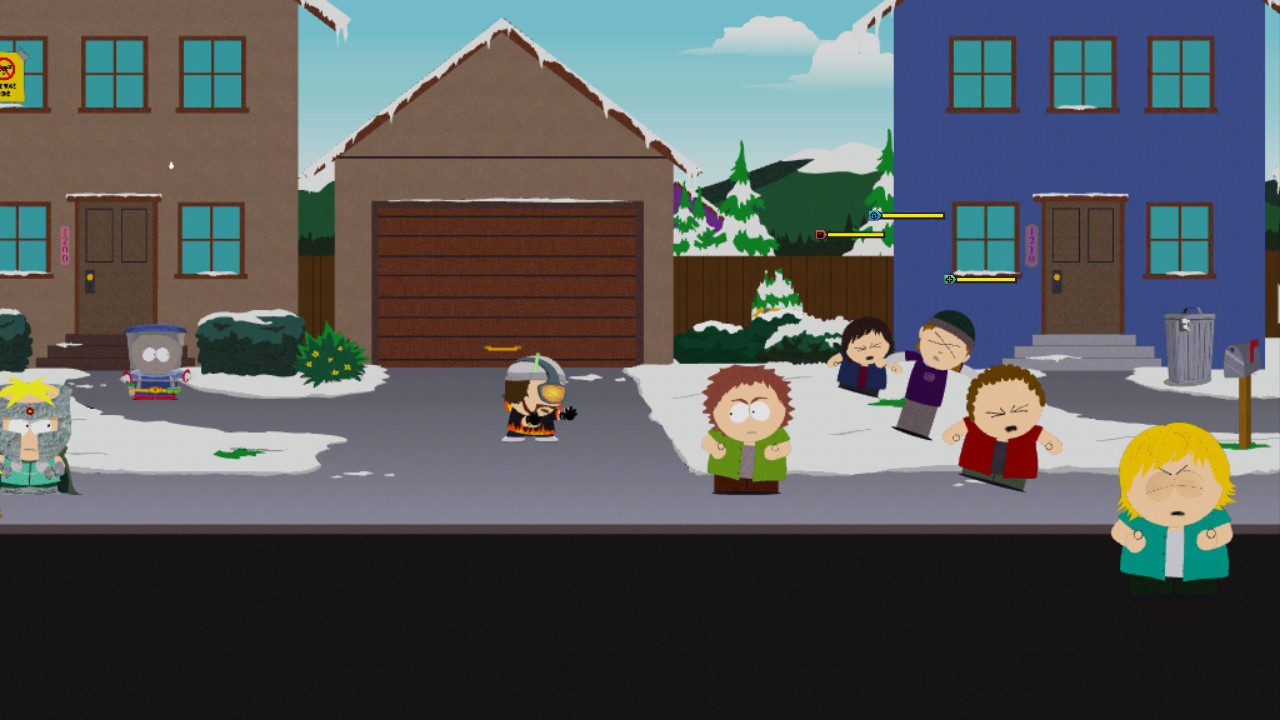 As the story progresses, your abilities do too as Cartman ridiculously retcons your backstory to explain how your skills came about and awoke within you. The most ridiculous move you have at your disposal is your farting ability, though.

Morgan Freeman (not really) runs a Taco Shop and these tacos enable you to fart is different ways – glitching time, freezing time, transferring from day to night and even traveling through time and all of these abilities either come into play during battle or serve the story. Your flatulence also applies to your friends, and many puzzles in the game will be overcome by farting with a specific ally. The Human Kite (Kyle) will help you reach higher ledges on buildings, Tool Shed (Stan) allows hazardous materials to be removed. Captain Diabetes (Scott) essentially hulks out to remove obstacles. And probably the worst, Professor Chaos (Butters) places a hamster in your bottom which you fire at electrical puzzles.

The best way to see South Park: The Fractured But Whole is as an incredibly long, interactive version on the television show that it is based on. Depending on how easily offended (or how much you like the show), it is also highly hilarious and there is a tremendous amount to see and do. It’s all very well written, voice-acted and just looks the part. It’s also spot on with its satirical take on the super-hero genre, but this also leads into a negative; it’s overly long. I was more than ready for the end of the game long before it actually makes a fist of it and saw out the final play, and it’s a theme that these types of movies also can suffer from; bloat and runtime. You’ll easily spend more than 20 hours with this, and that’s without completing all of the side quests. 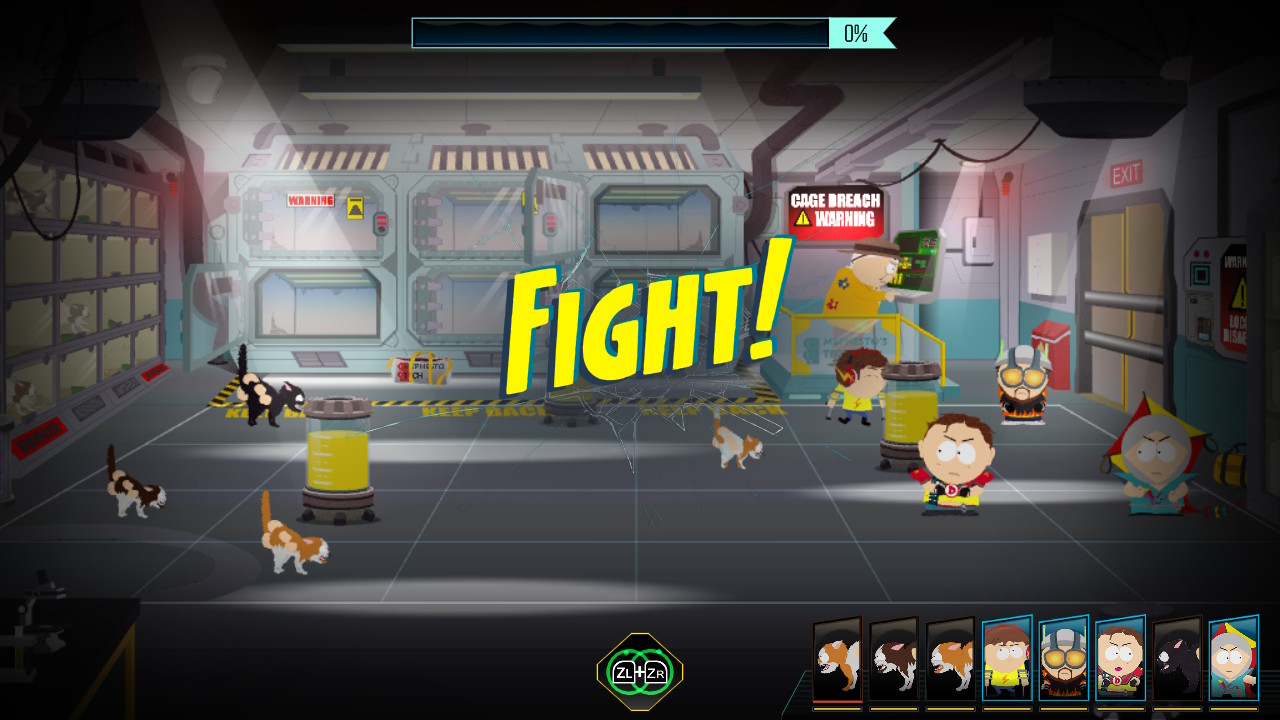 I also noticed a few visual glitches (moves not displaying as they played out), some of the audio either cutting off before finishing (during the video messages) or continuing to play over loading screens and sometimes moving around your surroundings can be annoying – a mound of snow or a curb stopping you by a pixel or two, but nothing major.

A few AV issues and potentially being too long aren’t really reasons to dislike the game, though, and what is here is very enjoyable. Just be warned that it’s all in very poor taste and not for children or those that are easily offended. Just like South Park then.

South Park The Fractured But Whole

South Park The Fractured But Whole is like a 20-hour episode of South Park. A satirical take on superhero films, it looks, sounds and feels the part – for the good and the bad. Essential for fans of the show, not for those that are easily offended. And absolutely not for kids!