Thinking outside the of the box.

It has been said that such is the fans’ affinity with the Japanese gaming firm, that they will buy anything with Nintendo written on it. Whilst sales of the Wii U would suggest otherwise, the release of Nintendo Labo gives us the opportunity to see whether that’s the case.

Simply put, Nintendo Labo is a selection of cardboard-based creations that you assemble yourself, and use the Nintendo Switch’s variety of features to bring said creations to life. What initially begins life as 28 different sheets of corrugated cardboard will ultimately become five different projects as you play, make and discover what this ingenious product has to offer.

If you think of it as like an interactive LEGO style set, you’ll follow the
fabulously presented instructions to build a thirteen-key piano, a motorbike, a house, a fishing rod and, probably the first one you’ll go for, the RC cars. Nintendo Labo really entwines the fun with the creativity, and actively engages you with what it is that you are doing. It’s also incredibly fun!

Let’s take a look at these projects, shall we? 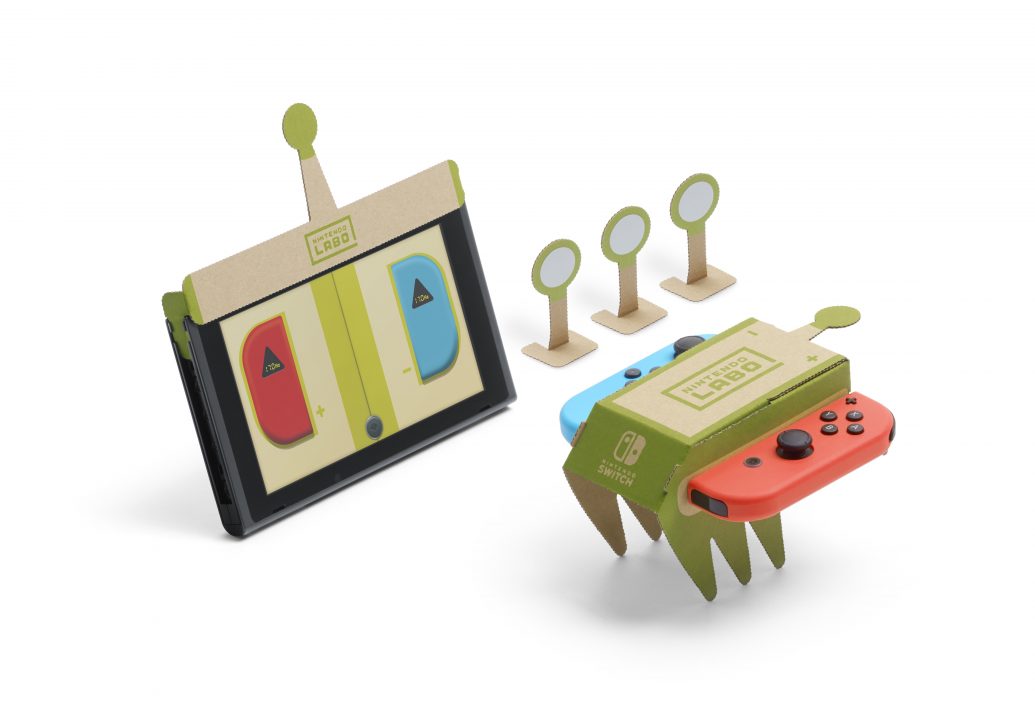 It says here RC Cars, but these are more akin to a cardboard bug (is it a hex-bug?) and is the easiest of the core projects to build. It says 10 minutes on the box to assemble – and it really is just pushing a few pieces together with minimal folding and challenge.

You have two of the little critters to assemble and you can decorate them if you see fit, and that additional (and sold separately) accessory pack will probably be useful here. Or anything else you have if you are feeling creative.

Once completed, you use the Switch unit (sans Joy-Con, as these are your “motors”)
to move your creation(s) by the use of HD Rumble. If you made both and own two full sets of Joy-Con, you can engage an opponent into a “who falls over first” match or just move them around for fun. It’ll all be over relatively
quickly but serves as a great introduction to what Nintendo Labo offers. Plus my kids LOVED decorating them! The legs on the critters did take a beating reasonably quickly, though, and it’s easily the most susceptible to being ruined quickly… 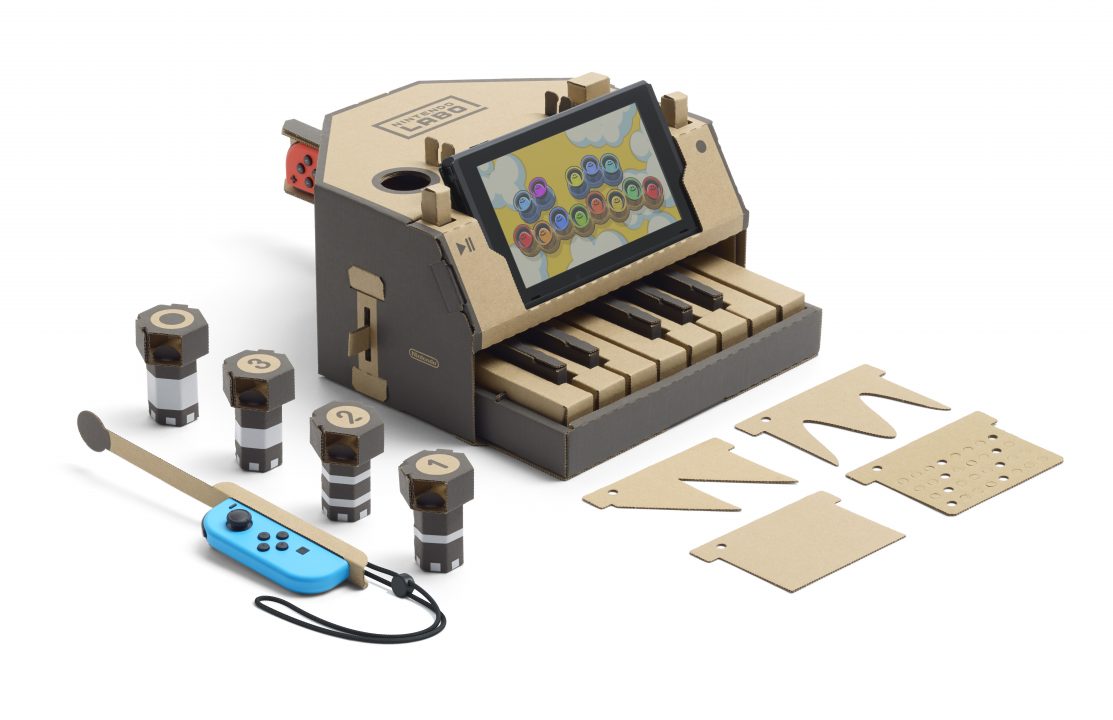 Easily – at least for me – the most impressive project within the Variety Pack, the Piano was the one I was initially most sceptical of when it was revealed. Can you make a functioning, practical piano just from cardboard? Over the course of a few hours with my eldest child and popping out the pieces from EIGHT of the sheets, the answer is a resounding yes.

The keys are surprising solid and robust, and it all works using the reflective tape and the IR camera on a right Joy-Con, which slides in the back. It is able to not only identify which keys are pressed, but also recognises changes in pitch from a side lever, and along the way you’ll also make four different switches to alter the sound that is played.

That means that in addition to the standard tune you’d expect to hear from an old
Joanna, you can also alter it to play cats, what I assume to be aliens and grumpy
old men, perfect for myself. Apparently. Ahem. The fourth switch also plays to the HD Rumble on the Joy-Con…

Also packed into the software is a recording studio for you to experiment and compose your own musical creations. 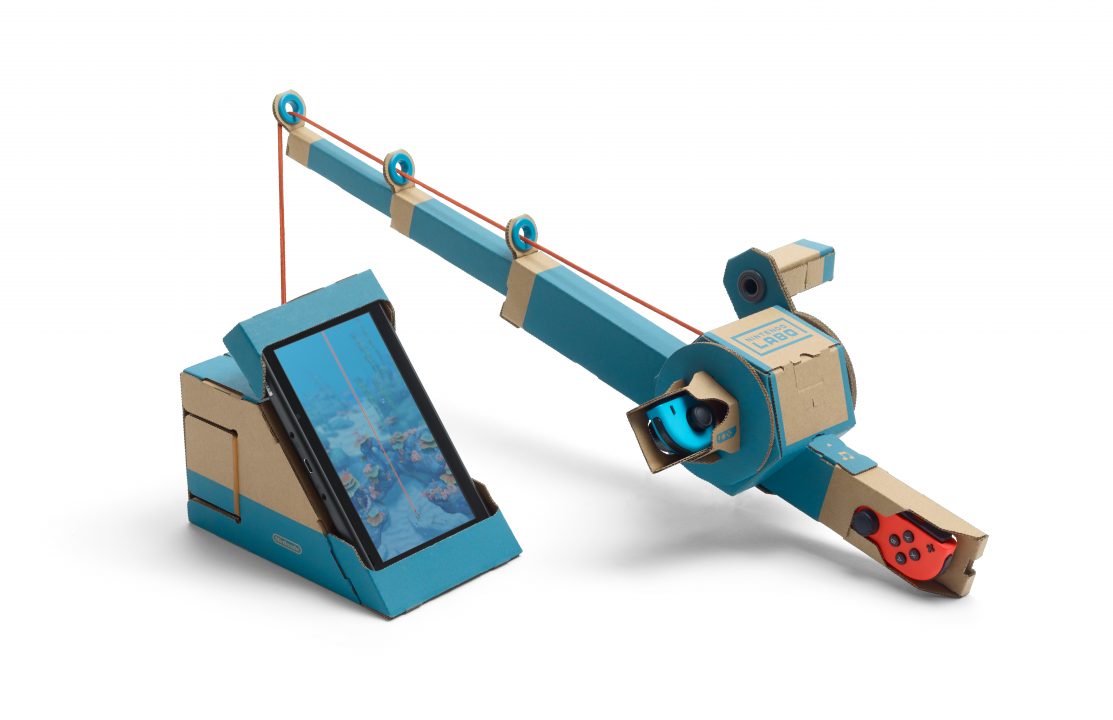 If you’ve ever fancied the idea of virtual fishing, then this project has you
covered. After crafting an extendable rod from card and a pseudo ocean, you’ll soon be reeling in a variety of sea-dwelling critters. You’ll be keeping track of your
captures and their weight, reeling, waving and winding along with the fun and even
be able to display them in an aquarium. Fun fact: the reel never actually moves. A combination of the accelerometers in the Joy-Con and a clever rubber band design gives the apparent illusion of catching fish; it’s all rather ingenious to be fair. 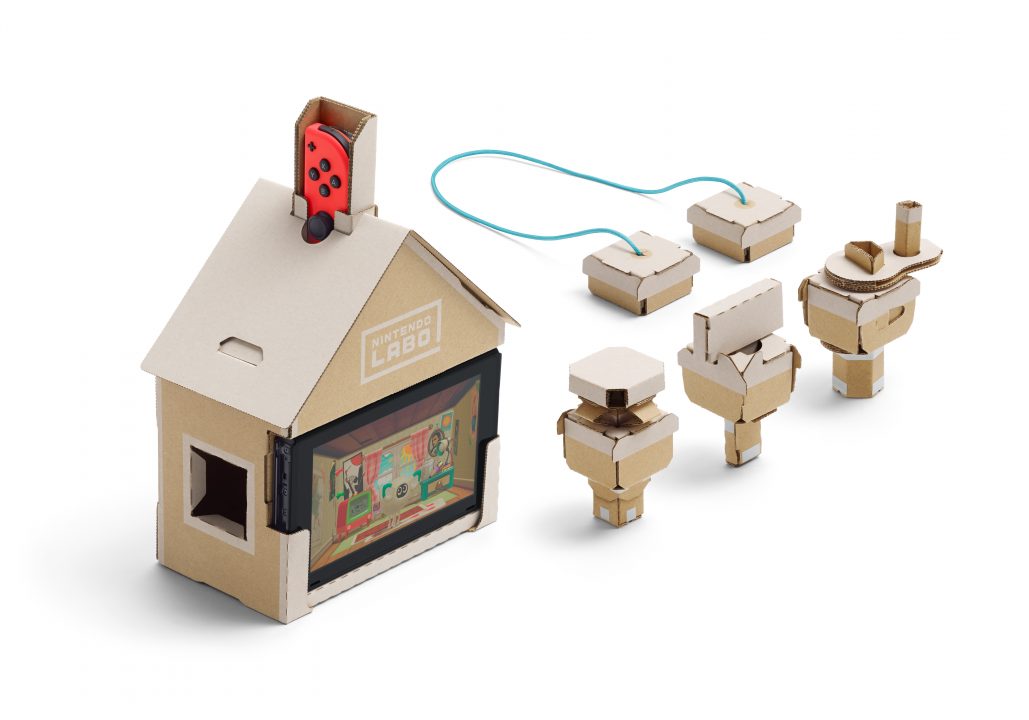 For me, the house project is like an oversized Tamagotchi. A mysterious and adorable little creature resides in the home you will have spent a good couple of hours crafting. Along with four walls (three?) and a roof, you also build three different ways to interact with the critter. A crank, a push button and a switch. By utilising these input mechanisms in different ways (or even at the same time) and with different combinations, you’ll discover and play a whole host of mini games to keep your little buddy entertained. My wife helped me to build this one and she quite enjoyed it, whilst my youngest child (who got to play it at the Science Museum back in February) thinks it’s the best Toy-Con of them all. 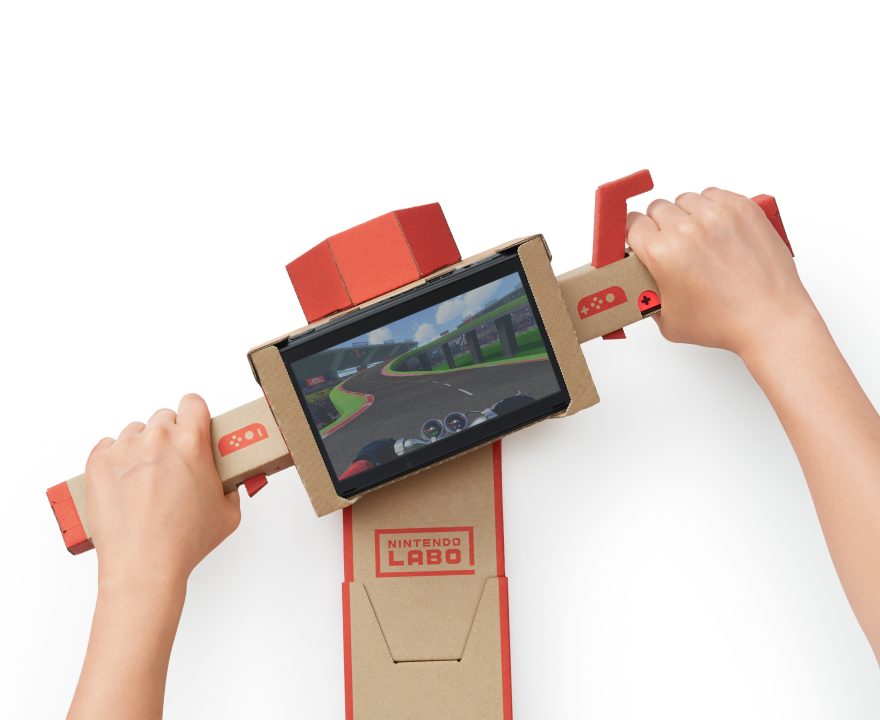 Really showing the diversity in the projects, the Motorbike is another impressive creation. With the Joy-Con enclosed each side of the Switch screen and acting as moveable handlebars, you’ll be racing around racetracks using the throttle as you would the real thing.

You’ll race opponents on a range of tracks or even have the ability to fashion your own in the stadium mode. The amount of replayabilty in this set is incredibly high, although I’d be wary about the long-term survivability of the handles.

Should you get Nintendo Labo?

It has to be said that Nintendo Labo is VERY impressive. The level of care and design that has gone into this cannot be underestimated and it’s so clever. Even though it’s just cardboard tabbed into cardboard with the occasional piece of string of tape on it, it all works so well. The instructions that break down the creative process are so intuitive and easy to follow that you’ll want all of your Swedish flat-pack furniture to come the same way.

You will spend many hours creating all of these projects, and even more playing them as you race around another track, catch a few more fish or bang out another tune on the Piano. It’s the kind of thing that only Nintendo would come up with, and the only thing that Nintendo can execute, such is the level of “gimmickry” bestowed upon the Switch through its unique inputs.

However, that gimmickry and ingenuity comes at a price; both Nintendo Labo kits are expensive. Sure, there’s a tremendous amount of gameplay and time to be spent here, but I’m not so sure that the general mainstream audience is going to buy into it. I have kids, and I’m pretty sure that kids is the predominant market; but at £60-odd quid for even this – plus the cost of a Switch if you don’t have one – it’s an expensive sell. Perhaps more one for a birthday present or special occasion, not something to buy on a whim. There’s also the small question of where you actually store the blooming things once assembled – although not overly bulky, you will need some shelf space allocated.

There is also the question of longevity: this is just cardboard after all. After a few weeks, the RC Cars have become knackered already, but the other projects have all stayed relatively unscathed from recurring use. It will have a definitive lifespan, but I can’t quite put a number on that. What I will say is, though, how long do you expect it to last? When you spend a small fortune on other kids toys, do you expect them to last or stay together forever? I know I certainly don’t, toys get broken, parts go missing and tastes change and move on.

What people shouldn’t lose sight of with Nintendo Labo is how engaging and fun it is throughout the whole process of making, playing and discovering, and enjoy it whilst it lasts. And that is ultimately what’s so brilliant about it.

It’s clever, it’s impressive and it’s undeniably Nintendo. If you have children and a Nintendo Switch – and your children love being creative – then it’s hard not to say it’s essential. However, despite its undeniable charm, it’s very niche, it’s expensive and not for everyone.