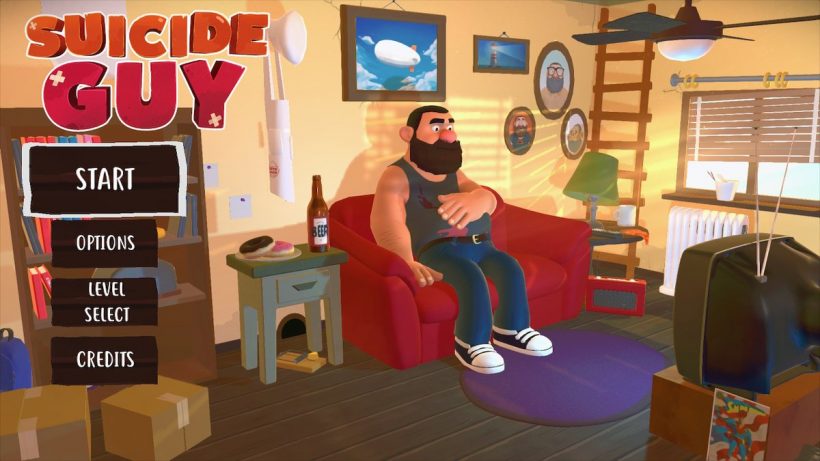 There are some messed-up and distasteful concepts on offer in gaming, with some gaining notoriety in the world’s media. Manhunt was one of the games which got black-flagged in most places for its grisly adult themes, and a whole host of other titles have accrued controversy due to the nature of the scenes they depict. So, the natural progression in this ever-more PC-leaning world? Suicide Guy, where you play through twenty-four levels where the main character is trying to off himself.

It’s like a macabre edition of Ready Steady Cook (I assume non-UK readers will get the reference). Each level has you placed into a situation, with a small number of items which you can interact with surrounding you. You need to find the formula needed by using these items to create a predicament from which you can bring yourself to an early grave. These can range from leaping off buildings and getting eaten to dying in terrible fires or getting blown up. Just how did this make it past classification?

I can give two guesses. One is the game’s cartoon, minimalist style. You could see this being set in the same world as previous Switch release Human: Fall Flat, if only for the way the backgrounds and environments appear. The second is the comical tone with which this self-destroying is presented – a cartoon style, starring a fat man, fast asleep in front of the TV, enduring these levels as a series of wacky nightmares.

What must be said, is that once you’ve made it through the first ten levels or so, you start to appreciate that there is a decent bit of clever level design at use here. To give an example, one level has you in a Jurassic World-like dinosaur enclosure (the main character even whistles the Jurassic Park theme all the while). In your (not very well) protected room, you have a stove, a microwave, an egg heat testing laser beam machine as well as a dinosaur egg in a protective glass case. While a T-Rex looks on, your mission is to break the glass around the egg and get it as hot as possible to launch the dino into a frenzy, making it smash through into the room and eat you up.

While none of the levels are overly long, some of them are more memorable than others. There are a couple of levels parodying other games, with one set in a mock Super Mario universe and another in a room where you set up portals trying to engineer a never-ending paradox. Hopefully we’ll be seeing Portal arriving on Switch sometime soon… Each level has one collectible, which doesn’t really do anything other than give personal satisfaction, but even that is limited as they’re almost all dead-easy to find.

However, it’s a relief that they aren’t in difficult-to-reach locations, as the accuracy of the controls is really dissatisfactory. Sections will have you moving items like crates around to use as platforms to jump around, but grabbing them is a pain – and you don’t even need to grab them to move them, so when trying to climb them you can accidentally shift them off the right location. You also need to drive vehicles at times; same issue.

Suicide Guy overcomes its macabre name and overall premise with some intelligent gameplay, though the controls feel too clunky and unpolished. Given this came out elsewhere previously, you’d have hoped this would have been tidied up for the Switch release.

Reviewing Suicide Guy was a complex one – it was a battle between the great ideas for the chains of events to complete the level, against the clunky and obtuse handling and controls. For that, it gets a score right down the middle.