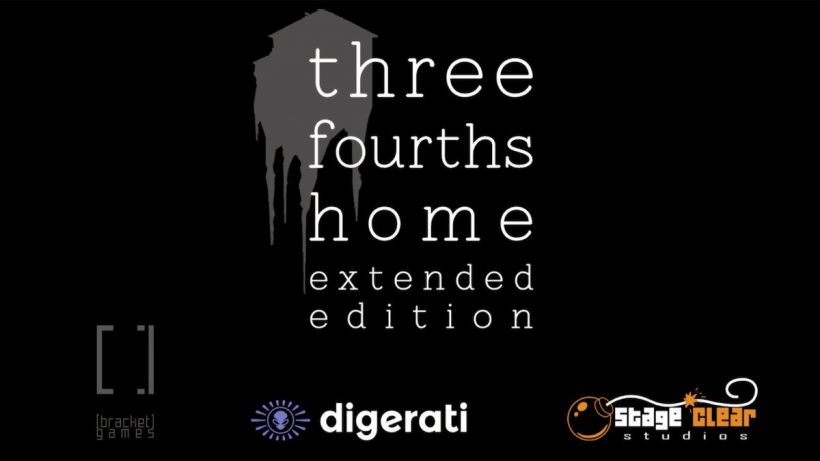 Apparently fractions are different in Nebraska…

The visual novel is proving a popular medium for developers on the Switch eShop. The Men of Yoshiwara games offered a book in game form, while the two Lost Phone games offered a different take on the genre, offering a bit more of an explorative take on the genre, which we rated very highly in our Switch Player review. It’s pleasing then, to see Three Fourths Home become the latest book-a-like to make its home on Nintendo’s system.

Three Fourths Home is told through the perspective of Kelly, a young woman driving through Nebraska on her way home from visiting the former home of her grandparents. A terrible storm is on the way, and her mother is concerned for her well being, urging her to get home as soon as possible, while her younger brother and her father both offer a differing viewpoint on life and the prospects of Kelly’s safety.

The player steers the story in picking Kelly’s responses – though it isn’t immediately obvious that this is the case. I found myself selecting the first option for the opening few minutes of the story as the highlighting difference between the options is much too subtle as the text attempts to blend into the minimalist art style.

The story, though, is only possible to read while you’re holding down the ZR button, clearly designed to give the impression that you’re pushing down on the accelerator of the car. Take your finger off it and all of the words which appear on the screen disappear, and Kelly’s car comes to a shuddering halt. It’s a bit irritating to think that you’ll be holding the button down for the entirety of the game – it’s not really necessary. Also, there’s a different button to press to advance from Kelly’s lines to those delivered by her family, something which prevents people from speeding through everything to get straight to the end. Now that is a wiser decision, making it likely that everyone playing is going to take in all of the dialogue and is therefore not likely to miss any of the enjoyment.

The art and visuals in this visual novel are simple but do contain some pretty effects. For the most part, you’ll simply see Kelly’s car travelling from left to right along the road, passing through crop fields. At certain points in the story, though, you see things passing in the background timed to Kelly talking about them. Each of the places have some sort of relevance to the family, and you’ll need to try each of the conversational options in order to find out the full backstory behind them, if that is what you so choose.

This being the Extended Edition, a post-game epilogue offers a bit more of Kelly’s story, this time in a snowy Minnesota setting. The story is an engaging one to follow and the writing staff must be given kudos, though it would have been nice for a bit more depth on the illustration side. Lauded by some as a game which should be in contention for game of the year when it was first released on other formats in 2015, my praise wouldn’t go that far – I enjoyed Another Lost Phone’s narrative and interactivity somewhat more – but it’s certainly not an experience that is anything but enjoyable to play through.

Three Fourths Home is an enjoyable visual novel which could have done without holding the ZR button down throughout the entire thing. The story is compelling and engaging, though it perhaps is lacking a satisfactory conclusion to match the build-up.