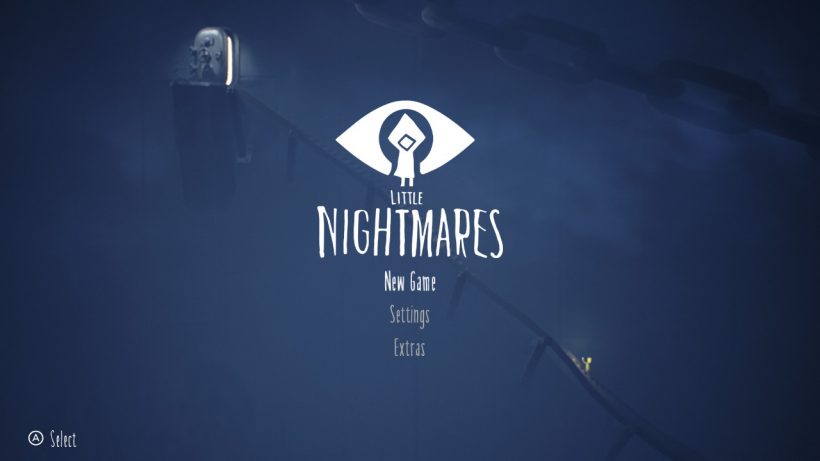 The Nintendo Switch’s first year has been an interesting assortment of new releases and re-issues of games on other platforms. Little Nightmares falls squarely into the latter category. Rather than just a simple re-issue of a game though, the Switch edition is the “complete edition” including all of the released DLC. 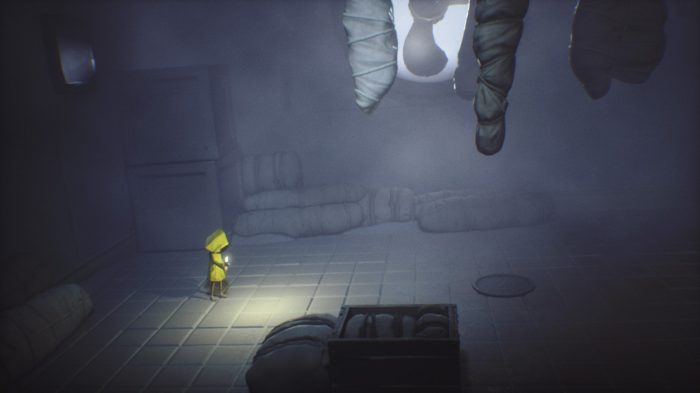 As the game begins you find your little hero, Six, waking up in a luggage case from a glimpse of a nightmare. It’s a dark cell in which there is no respite from the gloominess that pervades throughout Six’s worlds. Her face is always facing the ground leaving you projecting your emotions and feelings onto her. Her only tool is a pocket lighter that helps you to light up otherwise dark areas of the screen.

Little Nightmares is a very dark game. The first time you start the game you’re asked to calibrate the brightness to the right level – a feature that really is essential here. Each set of rooms or cells in the game is lit in a beautiful, macabre fashion that gently scratches at your insecurities. Unfortunately this doesn’t translate well to handheld mode on the Switch. I tried to play the game in a café and just became frustrated as, despite turning the game and console brightness up to max, I simply couldn’t make out the detail that is in the darkness. In some areas everything was almost completely black because of the ambient light and glare. 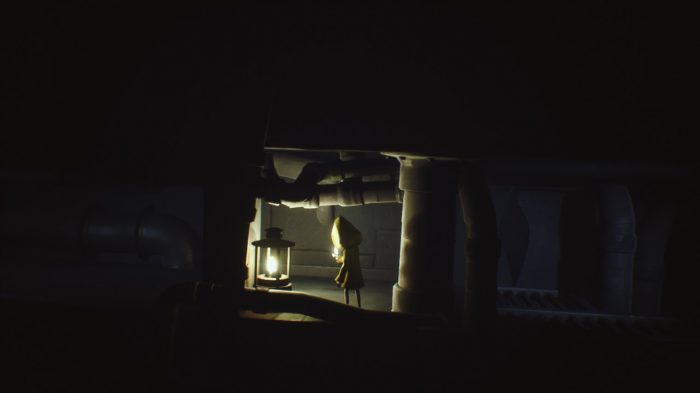 The first hour of playing is a tour of what initially appears to be a sad childhood home. You discover black leeches waiting to launch out and attack you, legs hanging from the ceiling out of shot and a giant, grotesque human who pursues you.

The cells that you move between are collections of rooms, swaying from side-to-side through a disturbing dream-like lens that effectively places you in Six’s world. It’s like you’re watching a diorama of a childhood nightmare (though the subtext feels very adult). The camera controls add to this effect. With the right stick you can pan horizontally and vertically. You can’t peek around corners or use it to your advantage beyond seeing more of the rooms within. Smartly you can’t stretch past an open door either. 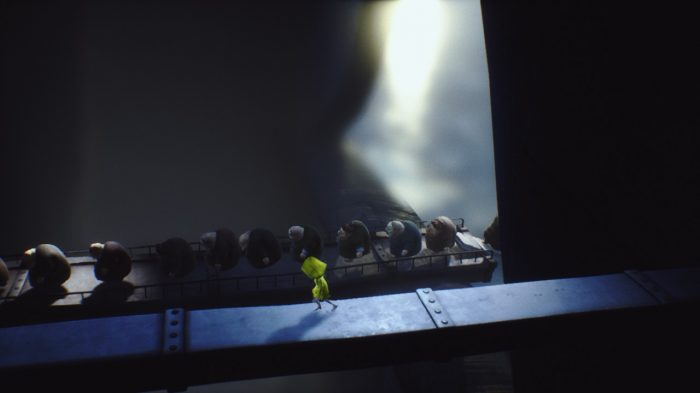 Adding to the atmosphere are a couple of classic tricks from the horror world. The music sits perfectly, becoming more intense as the drama and danger spikes. Whenever danger is near you can feel Six’s heart beating through the Joy-Con pulsing. It heightens your senses in a way a good horror movie would. The fact is that Little Nightmares nails the tone in every department. Style, graphics, sound effects and music. It’s all here in a gorgeously rendered 3D world. 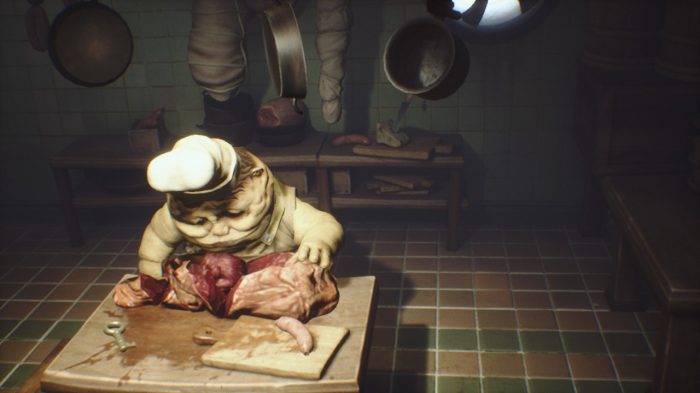 Beyond your lighter, there isn’t anything else to help you in your quest. You’re a small child in world of child catcher type giants that will grab at any moment. You have to solve environmental puzzles to help you in Six’s quest. These are a test of exploration, with usually levers or hatches that you need to activate or fix to progress. It requires some thought and lateral thinking on occasion but they never really ramp up to anything truly taxing. It does however lead to one of my chief complaints in Little Nightmares.

The loading times between each death is around 20-30 seconds. It really makes the premise of environmental puzzles suffer as you need to experiment and try ideas. Death isn’t a penalty in itself in Little Nightmares, but the associated black screen that you’re left with while you ponder yours and Six’s existence becomes very irritating very quickly. The checkpoints are usually reasonable but sometimes spread a little thin. Repeating the same areas in this manner and being coupled with the loading times is the wrong kind of frustrating. The mechanics are very similar to games such as Limbo and Inside. Although a 3D game, you’ll feel right at home as you can climb, jump and push and pull objects in the cells. However, the controls do sometimes get in the way. Whenever there’s some kind of chase you can occasionally fall foul of not being sure how far you really are away from an obstacle, resulting in a misstep or badly timed jump. The stealth elements are also somewhat hit-and-miss, you’re never quite sure if you’re in the eyeline of the monsters that you’re trying to evade. It feels inconsistent throughout the game, but then maybe that inconsistency makes it more realistic. 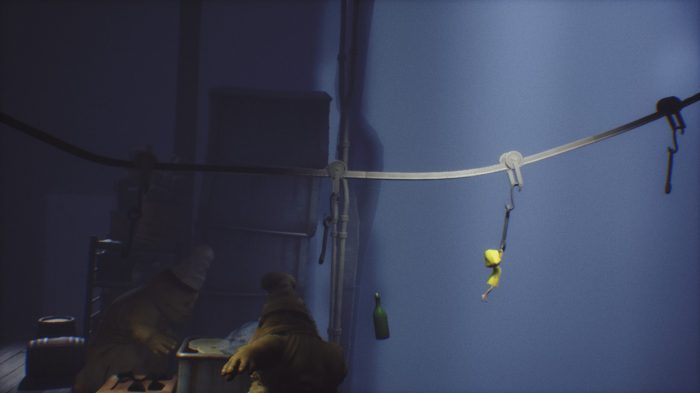 It’s worth mentioning the chases as very compelling set pieces. To a degree, these are scripted but only insofar as when Six triggers the events that unleash the nearby monsters. They are cleverly set apart so that they never become tiresome, and add a real sense danger when it happens.

That Tim Burton creepiness of the game is at first, quite alarming. There were some definite scares that caught me off guard leaving my heart racing fast and hard. By the end of the first of Little Nightmare’s five areas I felt like I had worked out the rhythm of the game pretty well. I could anticipate most of the surprises that should have made me jump. It’s not necessarily a bad thing as it shows that the pace of the game is just on the nail. 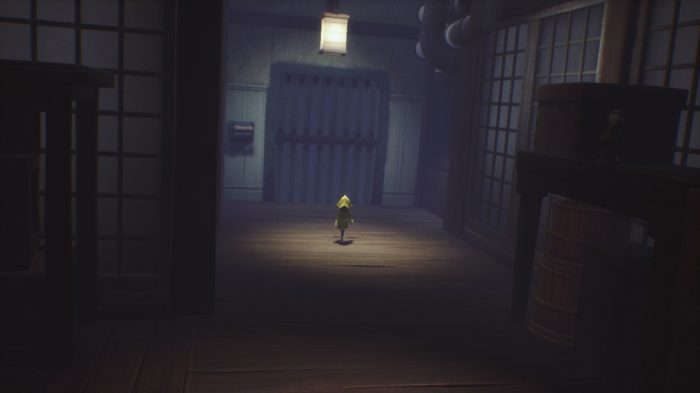 Despite the linear nature of Little Nightmares, there is replayability in the game. There are a number of collectables that can lead you to going back into the game to get that perfect score. They keep you looking around in the nooks and crannies of places that you’ve already explored providing a greater appreciation of the set pieces. The DLC adds an extra twist to the story. Rather than playing Six, you take on the character The Kid in an alternative storyline. It’s a solid continuation once you finish the main adventure.

Little Nightmares is ultimately a game of questions and uncertainties. The world you inhabit is not just a set of plot points and answers. As with all good stories, it leaves you pondering the events the you’ve experienced punctuated with memorable moments of darkness and intrigue.

There may be other games in a similar vein to Little Nightmares, but it really is a truly unique adventure making fantastic use of the 3D space and lighting. Occasionally the controls feel a little clunky, but it’s forgivable as you experience a macabre game and world unlike any other.