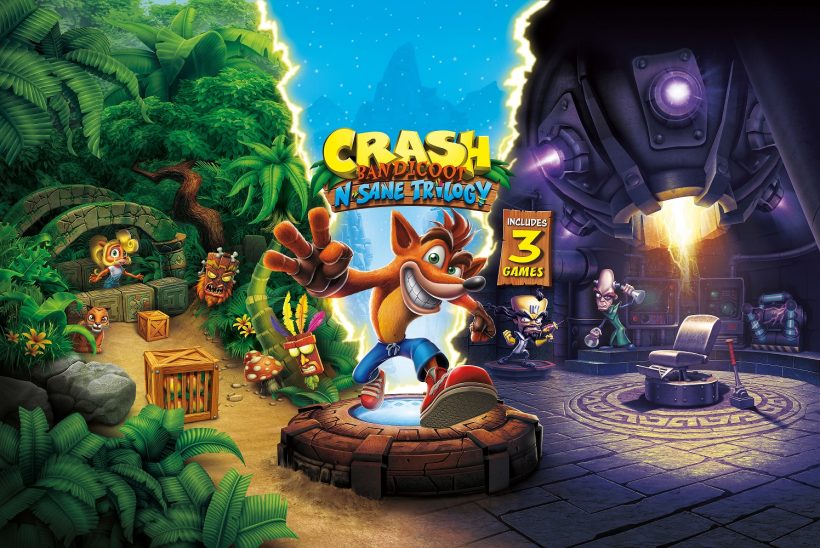 NEARLY PERFECT… But you died.

It’s been a long time coming since Shawn Layden walked out at E3 2016 to announce Crash’s return, and even longer for those yearning for him to come back to a Nintendo platform. Sure, he used to shout abuse at Nintendo outside of their American office through a megaphone, and it’d be wrong to say the PlayStation wasn’t his birthplace and home, but Nintendo haven’t seen a Crash game since Mind Over Mutant, so what better way to return into the limelight than with the original (and best) three games, available FOR THE FIRST TIME on a Nintendo platform. I can’t think of a better console than Switch.

In Crash Bandicoot N. Sane Trilogy, developer Vicarious Visions, who previously worked on some great GBA Crash Games (at least the first two anyway), have done a stellar job of reworking the original trilogy and tailoring it to a wide-range of modern hardware, all whilst staying elegantly true to the groundwork set by Naughty Dog.

Notoriously nick-named the ‘Sonic’s Ass’ game during original development (as you spend a lot of time looking at Crash – or now Coco – from behind in some levels, at the time a novelty), N. Sane Trilogy has the same classic, linear crate-smashing and fruit collecting gameplay that you remember from back in the day. Progressing from level to level in an attempt to thwart the efforts of Rogaine enthusiast Dr. Cortex, you’ll run up, down, left and right, encountering and overcoming a menagerie of different enemies and obstacles by spinning with Aku-Aku (HOOLIMAGA!) and jumping on TNT. Each level will often present its own unique challenge or intuitive platform-puzzle to solve, and in the second and third games, even more gameplay dynamics are thrown into the mix. Cortex Strikes Back adds in body slamming and sliding, and Warped adding even more moves and underwater/vehicle levels. With time trials, collectable gems (resulting in different endings), boss battles and more, there is plenty to get stuck into with this collection, and the games adhere to a new, all-encompassing feel under the remake whilst still retaining their own identity. 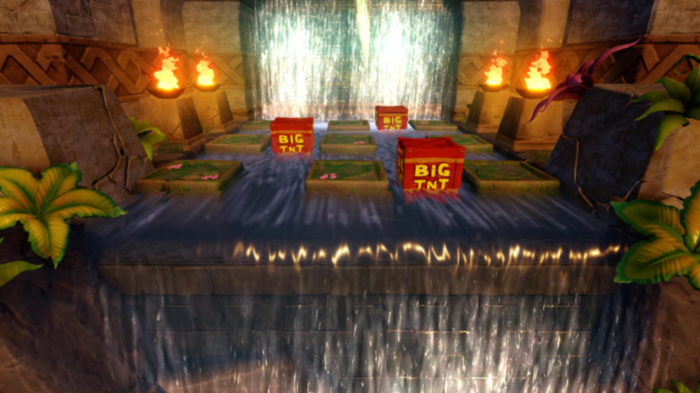 Despite having amalgamated the three classic titles onto one cartridge, Vicarious Visions simultaneously take each individual games’ aesthetic difference in environment and emphasise them massively, creating stark stylistic contrasts that set each title apart more so than the originals. The first Crash has luscious green; ancient temples with rolling traps and spikes, a precursor to Uncharted iconography. Cortex Strikes Back introduces snowy terrain into the mix alongside the Warp Room. Warped takes the formula and runs with it Bill & Ted style, using time travel to take you back to Medieval times and the Egyptian pyramids. These definitions, alongside the gameplay variety mentioned earlier, help in avoiding fatigue often suffered by game collections, in which the player gets through the first game in a set and then calls it a day.

An example of the newfound cohesiveness in N. Sane Trilogy is the streamlining of the original Crash Bandicoot game. Whilst my personal favourite in the series, the debut on PlayStation stood out as the ugly child for many, due to some strange rules and sharp edges that were smoothed out in the later games. The remake removes a lot of this tedium, with tweaks such as no longer having to restart to go for the gem, giving you multiple chances at the bonus stages, and even allowing you to save at any point. Time trials are also retrospectively added into the original, bringing it up to SPEED with the other two titles. 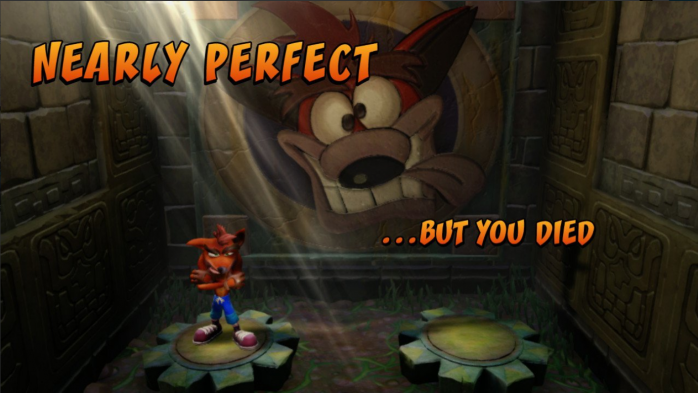 No expense is spared performance-wise with the Switch version of the N. Sane Trilogy, as it runs at 30fps as it does with the Xbox and PS4; the PC version can achieve an unlocked 60fps. In fact, according to Digital Foundry, it’s actually the second-fastest loading version of the game, after the Xbox.

Some corners have certainly been cut graphically from the other versions, with Vicarious stating that they cut visual fidelity on the Switch to make sure that the gameplay was as fluid as it could possibly be, but the game still looks banging, and a pleasant surprise for me was how good it looks in handheld mode. The HUD feels emboldened, outlined and defined on screen, and the colours pop in a way that I’ve only experienced with Nintendo’s first-party titles on the platform. Often when you go from docked to handheld, the colours can feel washed out on the 720p screen, but that isn’t the case here.

There is also some welcome HD rumble usage, and it’s fairly conservative with the battery life in handheld too. Perfect for screaming at ‘Stormy Ascent’ on the train. My only gripe with the Switch version would be the controls, as having used the D-pad entirely in the PS4 version, I found it difficult transferring to the analogue stick as my finger kept slipping, and the D-Pad isn’t ideally placed on the Joy-Con for me.

Whilst a ground-up remake of the original 90’s games, N. Sane Trilogy does bring across some hiccups that are embedded in the game’s natural and perhaps aged design. For example, the 2.5D plain that the game operates on in side-scrolling levels can at times be problematic. Rather than just running from left to right like a traditional platformer, you also can run into the camera and fall off the level, which can result in hitting an enemy that it looks like you should be avoiding, or missing a platform that it looks like you should be touching. These issues present a unique challenge to Vicarious Visions for the future, as they will need to continue the fluent, crate smashing gameplay that the series is famous for, whilst ironing out niggling annoyances that seem intrinsically linked to the way the levels are created. If ‘Future Tense’ is anything to go by, Vicarious’ own original level added as DLC (and inspired by an unreleased waterfall level from the original), I’m hopeful they can reach the right balance.

N. Sane Trilogy is as much fun to play on Switch as it is on any other platform. Vicarious Visions have done a cracking job of helping Crash leap right back into the mainstream, and we can only expect great things from them handling the IP in the future. Speaking of the future… Crash4Smash anyone?

Crash Bandicoot is back, and hopefully now for good. The original Naughty Dog trilogy are the best in the series, and not only does this collection see their debut on a Nintendo platform, but it’s the best version possible of the games. Willy the Wombat is reborn,and with Vicarious Visions at the helm I now have high hopes for the future, especially considering Crash has become the fastest selling game on Switch in 2018.