Nein out of ten?

With games like Fortnite and PUBG lighting up the sales charts and Twitch streams, single-player shooters can sometimes seem like they are few and far between. Hell, even Nintendo’s own colourful – and admittedly extremely satisfying – Splatoon 2 favours frantic multiplayer over a base game campaign that feels notably undercooked. Wolfenstein II: The New Colossus has now arrived on Nintendo Switch to remedy this issue, with developers Panic Button paying the same time, care, and attention they did with last year’s port of DOOM to once again bring over a fully-fledged version of an acclaimed Bethesda shooter.

There were various points in Wolfenstein II: The New Colossus that I found myself in sheer disbelief that I was playing this on ostensibly a handheld. Yes, when playing on a commute or on the toilet, BJ Blazkowicz’ gung-ho mission to dismantle the Nazi-dominated American state plays and looks flawlessly. Comparing this version side-by-side with either its PS4 or Xbox One counterpart would certainly dispute this claim, but doing so is kind of missing the point.

Not since PlayStation Vita’s Killzone: Mercenary has a portable first-person shooter kept me gripped and immersed from beginning to end. And while a lot of this impact is down to how great Wolfenstein II plays when undocked, it’s a testament to the fantastic narrative and characters the guys over at MachineGames have managed to create. This is very much what one would expect from a sequel to 2014’s series re-tooling Wolfenstein: The New Order, and that is by no means a bad thing.

So, what are you letting yourself in for when jumping into Wolfenstein II: The New Colossus? You once again step into the shoes of gaming’s original FPS hero BJ Blazkowicz, here an American army solider-turned-freedom fighter who this time is attempting to move the fight from the Third Reich’s homeland to US soil where they continue to grow. For those unaware, the sequel takes place in an alternate version of history, one in which WWII continued beyond 1945 and saw the technologically advanced German army succeed with their global war machine of terror. Those yet to experience Blazkowicz’ previous adventure on other consoles needn’t worry – the Switch version of Wolfenstein II is front-loaded with a montage refresh that works perfectly well to get newcomers up to speed.

This is useful considering that the new game picks up mere moments after the events of the last one, with Wolfenstein II doing a great job of letting you as Blazkowicz feel the effects of what your war-torn body has been put through. The series has always done a great job at riding the line between serious and silly, and thankfully The New Colossus is no different. For every moment you spend with fellow resistance fighters ranting about space aliens there’s a scene that sees you share a street with KKK followers. For every sequence of bombastic bad-assery there are moments of pure heartbreak.

As a shooter, Wolfenstein II: The New Colossus delivers all the thrills one would expect by modern standards. Weapons sounds are satisfyingly loud, enemies are smart and provide a challenge when needed to, and being able to approach situations with stealth before all chaos breaks loose provides a certain degree of player choice. This is a fully featured Triple-A shooter on every level! In terms of how this impacts the Switch version specifically, gyro controls are there to make lining up precise shots almost effortless, working with a fairly generous aim assist that makes dispatching foes a breeze. Wolfenstein II can be a challenge even on the standard difficulty, so at first, I’d recommend getting to grips with what to expect on easy.

It isn’t all fun and games (guns?) though, playing Wolfenstein II: The New Colossus in both Switch play modes introduces certain drawbacks. In docked, for example, the game simply can’t stand up to the graphical fidelity of most other shooters out there. It’s clear that in bringing it to Nintendo’s hybrid platform Panic Button needed to make certain concessions visually, with textures being noticeably flat or smudged at times. Handheld mode fairs slightly better, with the only main drawback being how small the subtitles appear on screen. It’s not a deal breaker by any means, but the font size definitely had me squinting a little when wanting to follow the dialogue during public space play. 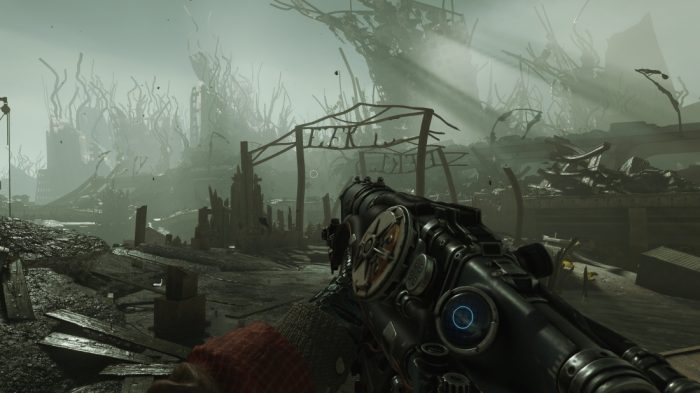 One disadvantage that will annoy many across both styles of play is how unforgiving Wolfenstein II’s waypoint system is. Most levels are simply a case of getting from one place to the other, sneaking into areas and taking down Nazi fools as you do so. However, from time to time during my playthrough if environments looked too similar I’d become disorientated. A simple tap of the D-pad sees the waypoint appear that points in the right direction. Pretty standard, right? Not so with Wolfenstein II it would seem, as it appears so small and so briefly that it can be tough to identify the marker. It’s a slight blemish on an otherwise fairly immaculate shooter that works perfectly on the go. 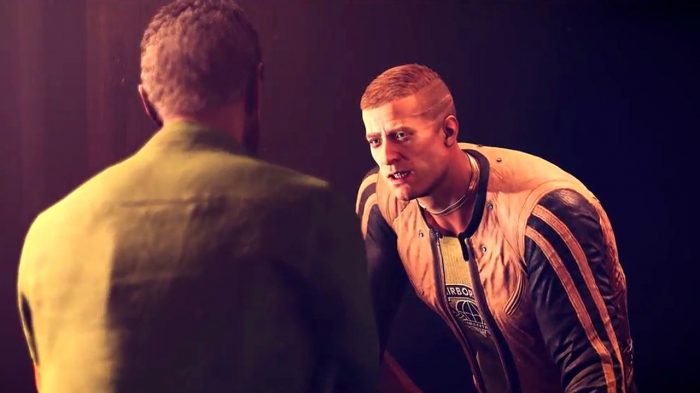 This was my first time playing Wolfenstein II: The New Colossus and I’m so glad I waited for the Nintendo Switch version. Despite the small niggles I had, never while shooting up a storm, slicing a Nazi’s throat, or experiencing BJ Blazkowicz’ childhood trauma, did I feel I was receiving a lesser experience. The resolution might fare better on the Switch itself as opposed to the big screen, but never did I notice any screen tearing, frame rate dips, or crashes.

Who’d have thought that I’d be playing one of my favourite games from 2017 for the first time in 2018? Wolfenstein II: The New Colossus is a true testament to Panic Button’s technological ability in working with this console – that’s a given. But it says a lot that I was able to stay invested in BJ Blazkowicz’ spectacle of shooting antics far more than I would’ve expected – to the same degree that original developer MachineGames would have wanted. If you hadn’t already guessed, Wolfenstein II: The New Colossus on Nintendo Switch is a work of wonder!

Wolfenstein II: The New Colossus doesn’t disappoint either with its story, characters, or in the Nazi-slaying department. The fact that you can do so portably, largely without compromise cements the Nintendo Switch version as one of the best ways to play despite a few niggles found across all platforms.