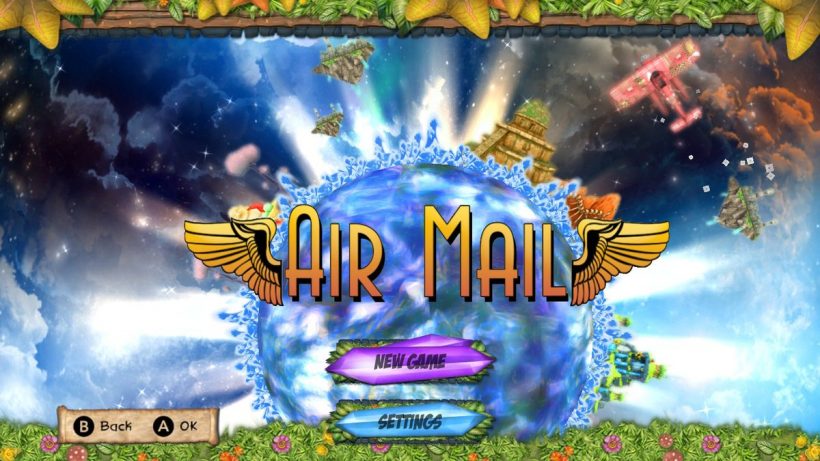 Could it be the Switch’s answer to Pilotwings?

There’s something quite soothing about a plane simulator. Pilotwings and Wii Sports Resort have offered the best experiences of planes so far on Nintendo consoles, the Wii game standing out particularly for its use of the Wii Remote, which was held in the same way as a young child might “fly” a toy plane in their bedroom.

Sailing over Wuhu Island really was a wonderful experience, and similar feelings come when playing Air Mail, with all missions set over the island of Domeeka. The storyline is that all of Domeeka’s elite flying team have been kidnapped, leaving only you, Scoop, to take on twenty-five missions in order to save the day. There’s no fighting action, per se – Scoop’s plane is not equipped with weapons, nor is it capable of performing spectacular manoeuvres like a loop the loop or a barrel roll. This former iOS game is simply about enjoying the flight. All you need to worry about as far as controls go is the ZR button helping you to take off and speed up, and the ZL button slowing you down and preparing you for landing.

Each mission is straightforward – you’ll be given a cutscene with voice acting before a short briefing on what you need to do on the level select menu, with tasks ranging from delivering the titular mail to seizing ammunition and dropping it off with warships which can take out the airborne fleet of the evil Verikai forces. In reality, every single mission plays out exactly the same – fly to this point, then fly to this point, but do it while trying to maximise seconds and minimise damage. Some levels are painfully easy – fly to the other side of the map to pick up a character, before performing an about-turn and flying her all to way back to a safe zone.

The challenge really doesn’t pick up at all until the later levels, which task you with collecting a large about of gemstones or put out fires in the city, both of which involve flying perilously close to land and buildings which can restart you level by way of a one-hit KO. You get awarded an overall score for missions based on the time you took to complete it, how accurately you performed the objective and the amount of damage you took.

If reviewed on the gameplay and challenge, Air Mail would probably get a lacklustre score, as neither are anything to write home about. But to do so would be unfair on the engaging game world that the developers have managed to create. The visuals are beautiful – you can see a Fire Emblem, Final Fantasy or even a Legend of Zelda game having a similar setting, and the game encourages exploration. You do find yourself wanting to get down onto the ground and explore the place on foot. The thing is, given Air Mail’s mobile history, it has no right to look this pretty; so much so that it actually turns what should be an average, forgettable game into one which has a bag of character. The musical tone matches the visuals – epic fantasy-esque tones give the setting a magical feel.

So then, a down-the-middle score for this one – I’d like to see more challenging missions, more complex piloting and a continuation of the beautiful visuals in any follow-up.

Air Mail is best played for its exploration and character. More memorable missions would have pushed the score up here – as they are, they’re far too uninspiring.