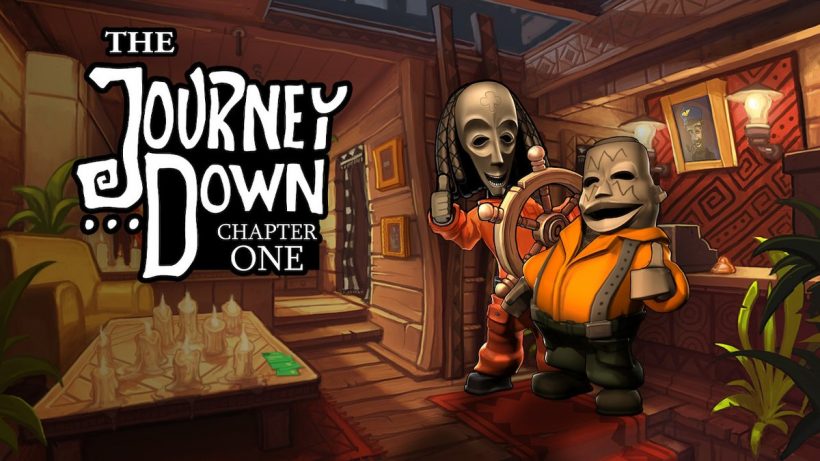 Down down, deeper and down.

Now’s a great time to begin The Journey Down – all three of the games in the trilogy arrived rather rapidly on the Switch eShop in the last few months.

You play as Bwana, an amiable but naïve person with a Caribbean accent in a dark world full of mysteries, from a sea made of gas which seemingly nobody knows what lies beneath, to a shady and ruthless underground force which pulls the strings of the law and order of the dystopian world above land.

The lovable protagonist is able to charm his way into friendships with some characters, but is looked down on by others, offering a great sense of vulnerability to the storytelling. The characters are humanoid in shape but not in physical appearance, all being given a futuristic metallic look, and it’s touches of personality which help to establish a bit more of a rapport with the player.

The Journey Down series offers point-and-click puzzler gameplay which offers a challenge, and fortunately not too much of a challenge. It follows the traditional “talk to everyone you see” approach employed so well by the likes of the Professor Layton and Phoenix Wright games, but every now and then you’ll be handed key items to store in your inventory, all of which will either solve a conundrum or prompt a different reaction from one of the non-playable characters which offers storyline progression in one way or another, with an air horn appearing in the final game of the set to offer some hilarity with some very annoyed locals. Some of the solutions may not have made as much logical sense of others, but serve as a reminder to always pay attention to as much of Bwana’s musings as possible, as there’s a good chance that he’ll be offering a clue.

I enjoyed the writing, particularly getting to know Bwana quite quickly after a slow start where he is living a peaceful enough life working on his charter with his friend Kito. But, a mysterious lady shows up in search of the Journal of the Journey Down, a book which is said to hold the key for accessing the Underland. The plot has multiple levels and is very satisfyingly composed, with Bwana hunting for his long-missing father while also helping to chase down the Journal, taking on smaller tasks along the way to ensure the story can progress logically. It’s definitely advised to start with the first game, which introduces Bwana, Kito and friends, particularly as each of the three games follows on the plotline right where the previous game left off.

Visuals are pretty strong, especially considering the series’ humble beginnings as a low-res freeware game, and the action is interspersed with some impressive looking cutscenes which bridge storyline and setting gaps. The Journey Down can be played on the big TV to show off its visuals as best as possible, but comfortably the superior method of playing the trilogy is in handheld mode. Touch screen controls are utilised well, which saves bags of time on moving the cursor around the screen to select and move objects.

The Journey Down series is likely the best point-and-click set on the Switch eShop at the moment. While it may not blow you away as an experience you’ve never had before, this is a great entry in the genre.

The Journey Down blends great comic timing, even including adult humour in parts, with a dark sense of threat which makes for great storytelling. Protagonist Bwana is likeable, and the games are a lot of fun to play.