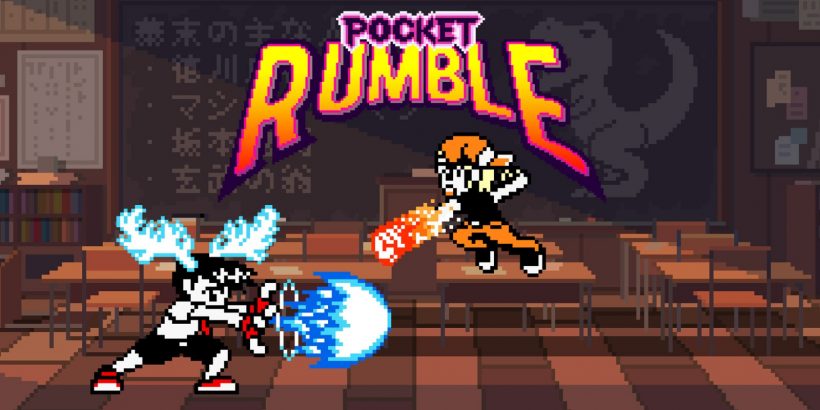 Fighting games can often be a daunting prospect for a lot of gamers. The thought of having to grapple with the basic controls before mastering a plethora of combos and special attacks is enough to incite dread in even the most seasoned of players. So with that in mind, Cardboard Robot Games has simplified the genre for their Kickstarted debut title Pocket Rumble. Doing away with complicated combos, it’s a beat-em-up that actively tries to be more inclusive without necessarily losing any of its depth or appeal.

Going into Pocket Rumble, I thought the simplified control scheme would make the game a bit of a cake walk. This certainly isn’t the case. Upon booting up the game’s arcade mode and choosing the fighter Tenchi (Pocket Rumble’s version of Street Fighter veteran Ryu), I went into the first bout with a huge amount of confidence. About five minutes later, I was staring at the Switch’s screen, mouth agape as the game sent me back to the main menu after being annihilated by the first opponent. 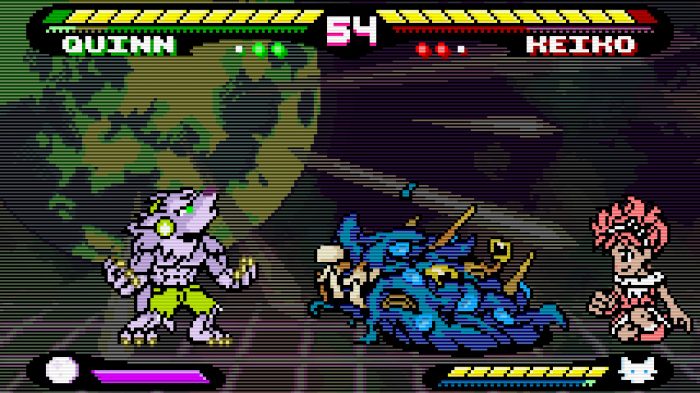 The gameplay is remarkably simplistic for a beat-em-up: the left Joy-Con’s face buttons move your character about the stage, whilst A and B are your attack buttons – that’s it! Whilst something like Street Fighter will have you making half circles and quarter circles with the d-pad – amongst other complex combinations – Pocket Rumble’s special attacks are limited to pressing either down and left on the d-pad, or down and right, along with either A or B. Of course, attacks vary greatly depending on the character, and some moves flow together into combos better than others, so whilst it’s a lot more simplistic than other fighters, it’s still worth practising a bit.

Regardless of the game’s watered down control system, the gameplay still feels incredibly tight, and after a bit of practise you’ll soon be able to conquer the initially brutal opponent AI. You won’t be able to simply jump into Pocket Rumble and button mash your way to victory, because rest assured you’ll come away from the experience deflated if you do so. Matches can be over very quickly thanks to the brisk movement of the characters, and as such the usual ‘best of three’ set up for fighting games has been modified to ‘best of five’ for Pocket Rumble. 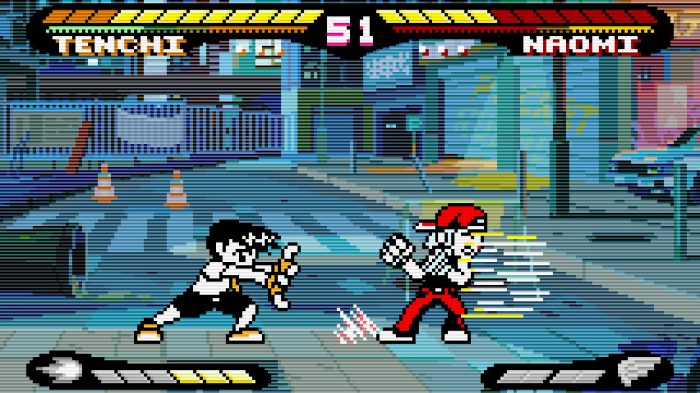 Of course, no fighting game is complete without multiplayer, and Pocket Rumble excels in this area, too. You can easily play local two player with the Joy-Cons on the Switch, and playing either on the TV or in kickstand mode is an equal delight. Playing with someone else also provides a more balanced experienced, as the CPU AI can admittedly be a bit too advanced for a lot of players.

Visually, Pocket Rumble nails the retro fighter aesthetic. Fighter sprites are limited to four colours (though you can choose from eight different colour combinations on the character select screen), but still look remarkably full of character for an 8-bit title. The backgrounds are slightly more detailed, depicting various locales from laboratories to diners. Additionally, there is also a lovely CRT filter applied to the visuals to make it look extra retro. Whether playing on the big screen or on the Switch screen itself, Pocket Rumble certainly looks the part.

Pocket Rumble is a delightful fighting game boasting tight gameplay and lovely visuals. Its brutal difficulty is a bit at odds with the simplified control scheme, but as with anything, perseverance breeds excellence.