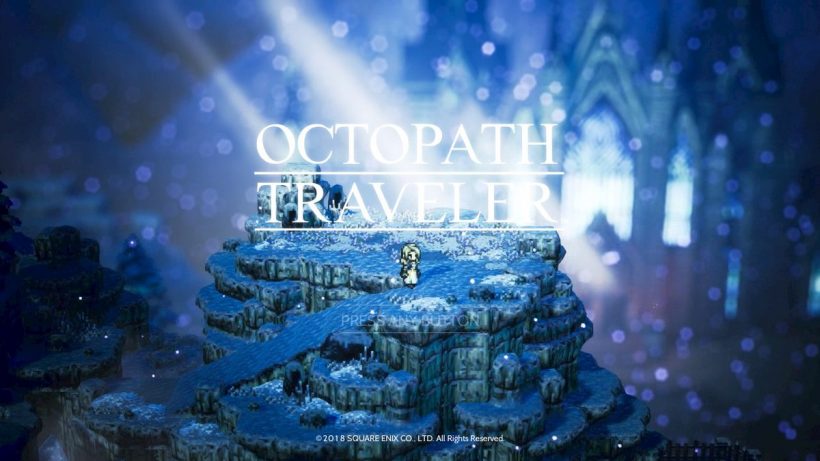 Another big new IP exclusive to the Switch, and we’ve played it.

After two well-received demos and numerous gleeful presentations from Nintendo, Octopath Traveler is finally in our hands.

For those confused about the unusual sounding title, the ‘Octopath’ refers to the eight heroes of the game, all of whom have their own story (ie, their own “path”) to follow. You get to choose any of the eight characters to begin with, and you’ll be able to find the others across the map, taking in bits of their story and recruiting them for your team. The scale and the ambition from Square is commendable, that’s for sure.

Some of the starting characters offer more of a challenge than others, and RPG newbies would be well-advised to research the most accommodating choice before jumping straight in. The learning curve is steep, and beyond learning the basic controls for battling, you find yourself thrust right into the action, with special moves for each character (H’aanit can capture enemies and summon them for assistance in later battles, for instance, while Alfin is an apothecary and can conjure healing potions as well as others to harm enemies) added to super strength moves, items, defend and flee options. A lot of the focus is on shattering the enemies’ defensive shield, which earns you a round (the battles are turn-based) to deal higher damage. The shield counts down in number each time that you deliver a super effective attack type, and when that number hits zero, it’s time to pull out the special moves.

Enemies are all weak to certain types of attacks, and you’ll have to figure these out through trial and error. Options range from bow and arrow attacks to sword attacks, ice attacks or others, meaning it takes times to try out every possibility and figure things out. Luckily, weaknesses are recorded and displayed forever once you find them for each type of enemy, meaning the trial and error isn’t a frustration which will plague you. Making things all the more deep and complex, characters can be assigned with jobs, which can switch up the attack style of the character and, if used correctly, can offer crucial tactical advantages, by giving magic-focused fighters physical attacks when needed, for example.

Your typical battle will take a minute or two to reach its conclusion, but the boss battles are a different story altogether. The word epic is thrown around far too often in the twenty-first century video game community, but the boss battles in Octopath Traveler are epic. Epic, as in, they take absolutely ages. I’m certainly not someone who’s experienced taking on a boss for a full half-hour in one go, particularly not in an RPG anyway. The layout of the battle interface makes it really difficult to know how much health a boss has left – there’s certainly no meter on the screen, anyway, so when they eventually succumb into a cloud of dust, it offers a real sigh of relief.

You can wander through Asterra from pretty early on, though you’ll see that each area on the map has been marked with a danger level, which indicates how strong the enemies will be there. Rest assured, you’ll have no hope whatsoever of attaining any sort of success in the higher-ranked areas early in the game. Instead, you’ll need to focus for a long time on battling, gaining experience, levelling up and upgrading. This is where the hard work goes in – the opening few hours are filled with talking and story-setting, and it’s not the sort of game which hits the ground running with major action sequences to get you on the edge of your seat.

Speaking of talking, there is a lot of it. I wouldn’t say the pacing in the game is wonderful due to being stuck hanging around in such unavoidable conversations for so much of the time. There will be so many people who will be put off by this, and while it is possible to just sit back and enjoy as the story is slowly delivered to you, despite the characters coming together and their stories intertwining, there’s no real satisfying payoff to it.

There’s nothing like a Marvel’s Avengers-style unison of the greater good to take down an all-powerful evil enemy, and I feel like that is something which would have made a marked impression on the game for the better. When my first character choice H’aanit came across Alfin for the first time, it was as it Alfin just began to pour out his life story but H’aanit didn’t really offer anything in reply; as if you’re reading a book, just in a random order, with the whole of the story ultimately remaining the same regardless of the order you take it in.

I’ll make no bones about it – I love Octopath Traveler’s art style. Never before has a game which deliberately set out for a pixelated look felt so deep and alive, with bits in the background fading into a blur as you walk past and offering its own unique sense of fantasy. The orchestral wonders that form the soundtrack are also fantastic, and really boost the atmosphere and complement the escapism offered by Octopath Traveler’s world.

But it’s not all great on the audio side. Voice acting is actually so bad that it alone detracts from the experience. H’aanit speaks in Old English, and has certain phrases that she repeats over and over and over again in battle – “letten the hunt beginnen,” “what next?” and “come in, if thou darest,” are just a few of her phrases which are hammered out so often during a fight that it just zones out the immersion. You’d understand things like this being included in the RPGs of old, simply because they lacked the space to include resources for more than a few soundbites, but in 2018? It’s just not necessary. Getting people who don’t come from a background of loving RPGs on board is made so much more difficult by things like this.

There’s no denying that Octopath Traveler is a quality package and a sound offering as a Switch exclusive. It’ll certainly be far more enticing experience for the RPG fanatics, and fans of action games will find it overly slow-paced. For that group of players, I recommend checking out a few videos of the game in action first before taking the plunge. Otherwise, this could be the start of a celebrated new Nintendo/Square Enix IP.

Octopath Traveler is a grower, and one which takes a good while to reach full swing. The reward for the perseverance is a beautiful world and enough story to shake a stick at, but not a wonderfully satisfying conclusion.