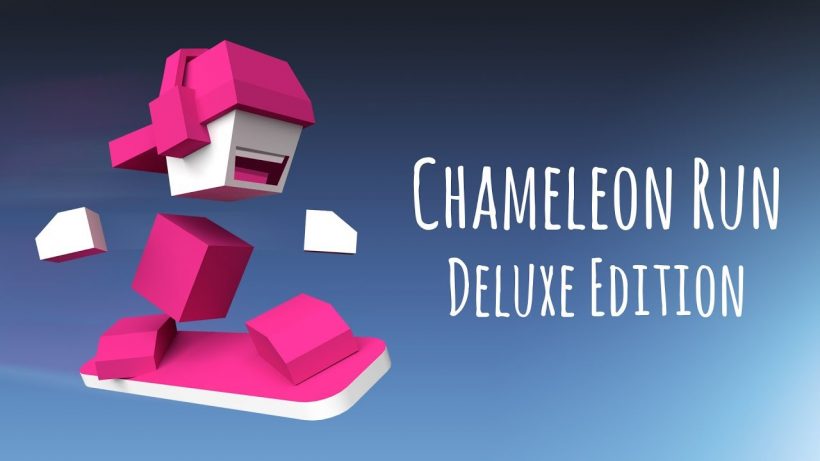 Does this game blend in with the crowd?

They are simple, quick, and addictive. Though you needn’t venture too far into mobile app stores before bumping into a huge swash of auto-runners, if done right, games in the genre can be a real joy. Developed by Hyperbolic Magnetism and released in 2016 on IOS and Android, Chameleon Run Deluxe is one of those games. The eponymous ‘deluxe’ content is exclusive to Switch as is usually the case with mobile ports, but does it warrant another sprint?

I never played the original Chameleon Run, but two years on, it’s clear that the critical acclaim it garnered was warranted. You’re a guy with an ability to change colou, tasked with surviving an onslaught of polygonal obstacles in levels that rarely last longer than a minute. The only action at your disposal is jump and colour shift, which when used in perfect tandem results somewhat in the button pressing equivalent of free-form jazz. Colour shifting is Chameleon Run Deluxe’s chief gimmick, whereby you have to be the same colour as the floor to continue running.

While extremely basic from a visual standpoint, your objective to make it from one side of the isometric stage to the other is all the more layered thanks to the challenges posed in each level. There are five of them in total, with each individual challenge only achievable on its own run. This might sound tedious initially, but by focussing on either collecting orbs or smoke pellets, trying not to swap colours, or getting a three-star time, this need to replay levels over and over really helps you know each stage inside and out.

It can’t be understated just how much replay value each one of Chameleon Run Deluxe’s levels offers, partially due to the challenges but also in the number of paths dictated by them. Not being able to colour shift means only a certain route can be taken so as to not touch the alternate shade, for example, forcing you to approach the stage from an entirely different angle than if you were just hoping to finish. Equally, opting to collect the orbs or smoke pellets means having to shake up your strategy again.

The more challenges you complete, the more levels eventually open themselves up to you. The greatest tool in your arsenal is without question how much control Chameleon Run Deluxe over your simple jump. Mapped to the A button, your character’s height, distance, and general momentum is all dependent on how long you hold it down. This is especially useful when the distance between platforms steadily starts to increase, until eventually you’re ducking, weaving, and mid-air jumping like a pro.

Unfortunately, the so-called ‘deluxe’ version of Chameleon Run translates to little more than a few additional courses. It’s a nice bonus, sure, but hardly anything to shout about for those who have already played the game. Still, Chameleon Run Deluxe is an endlessly fun auto-runner that is a fun way to waste time and test your platforming skill. While the mobile version is more convenient, having it as an option on the Switch is always a good thing.

If you’re in the market for an auto- or endless-runner on Switch, you can’t do much better than Chameleon Run Deluxe. While the high price point is a definite issue compared to mobile and the new levels aren’t totally worth it, it’s an ideal way to test your memory and skill, and enjoy yourself while doing it.