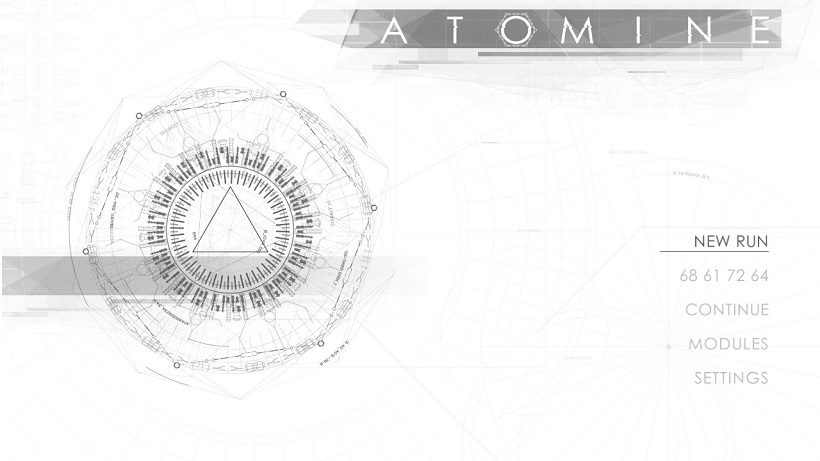 Will this virus go viral?

Atomine is a procedurally-generated twin-stick shooter developed by Broken Arms Games and published by MixedBag. Taking inspiration from the real-life STUXNET computer virus discovered in 2010, Atomine involves navigating through various levels as an advanced computer virus, defeating various anti-virus bosses and seeking out upgrades and XP drops to further your hacking capabilities along the way. In terms of its basic controls, Atomine is simple to master. The left joystick is for movement, while the right is as simple as tilt-to-shoot.

Although the graphics of Atomine appear fairly simplistic, they are actually perfectly suited for the game given its hacking-based concept. You are a complex piece of code disrupting and corrupting the various levels of a computing system, and this theme is superbly captured by the developing and varied level designs that appear as you progress through the game. Some designs, however, are very poorly thought-out – particularly in the middle stages, where it becomes incredibly difficult to tell where the pathways and doorways are located and where enemies are actually shooting at you from.

Atomine, by relying heavily on procedural generation and luck-based weapon and XP drops, can often feel unfair at times. Enemies spawn rapidly and come at you from all directions – even from rooms that you have already cleared – and often feel overpowered when encountered on a run where the odds of the more useful power-ups and attributes for your virus self have not worked in your favour. Undoubtedly, the most frustrating thing about Atomine is that, once your health is depleted, it’s game over and you have to start all the way back at the beginning – with no quicksave or checkpoint systems to speak of. You’ll definitely be needing huge amounts of luck to overcome the relentless and overwhelming firepower of the various antivirus enemies.

Still, the sheer variety of enemies, available add-ons for your playable character and randomised level structures mean that Atomine feels fresh and enticing each time you play it. There are so many types of weapon upgrades, movement mechanics and character model variants to discover through repeated gameplay and the visitation of the upgrade room available on each level, and the gallery accessible via the in-game menu allows you to view each of these outside of play to familiarise yourself with their appearances and abilities.

To anyone thinking of picking up Atomine, two pieces of advice. Firstly, always seek out the XP and upgrade rooms on each level. Often, upgrade rooms can be used twice per level – before and after defeating all of the enemies. This makes upgrading your weapons much easier, and gives a better chance of surviving the later stages of the game. Secondly, keep moving at all times – especially whilst shooting. Enemies will always find and follow you, so you don’t want to get too confident and stay stationary. Plus, you’re more likely to discover new things.

Overall, as unfair as Atomine can sometimes feel (and as irritating its ambiguous graphics can be), its gameplay is genuinely challenging and motivating, with each crushing failure only serving to drive you to try again to conquer the system. The game continues to get tougher and tougher, and reaching the final boss is a huge challenge – but at least you’ve got a great soundtrack to play along to.

Atomine is a gripping indie twin-stick shooter with plenty of level variation and unlockables to satisfy its players. Although it can often feel unfair, the gameplay is genuinely captivating and inspires players to become the ultimate hacking machine.