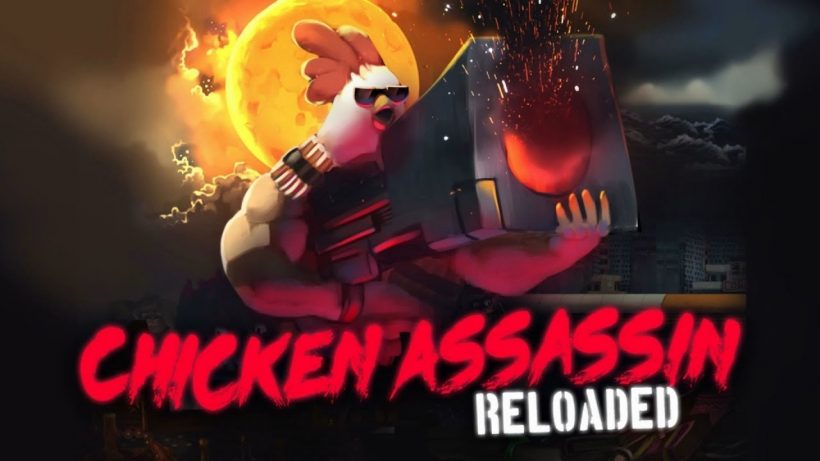 Too much clicking, not enough clucking.

For a game with as bombastic a title as Chicken Assassin: Reloaded, it really was surprising to see how little fanfare is given upon first loading it up. Marketed primarily as an Action-RPG, there’s no tutorial, no instructions, and one of the poorest attempts at a story set-up I think I’ve ever seen. “But how is this possible”, I asked myself. “How can a game that slots into the same genre as such great experiences as Dark Souls, Monster Hunter World, and more begin with such a whimper?”. And then, the clicking begins…

You see, Chicken Assassin: Reloaded is a game where your enjoyment rests entirely on expectation. If, like me, you go in expecting a 2D Action-RPG in which you play a badass chicken tasked with taking criminals, well, to task, you’ll be disappointed. But, if you jump in wanting to scratch that itch of an addictive loot grind and clicking sensation certain styles of games offer, boy, this is the absolute dream! With that settled, onto what Chicken Assassin: Reloaded is all about… 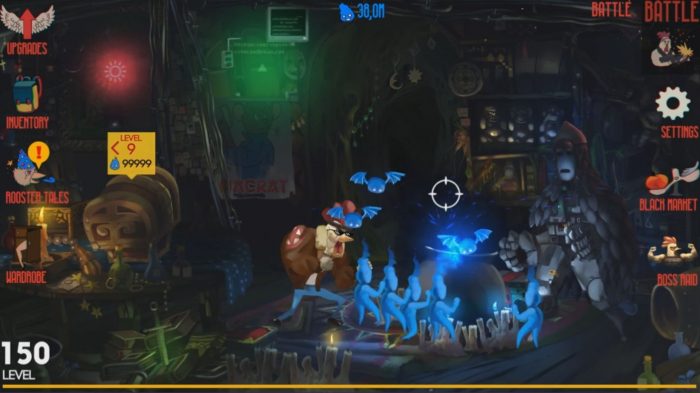 Yet another Switch port of a game that found previous success on Mobile, Chicken Assassin: Reloaded sees you play as Mean McAllister, a rough ‘n’ tough chicken in search of his kidnapped girlfriend. And that’s about it, really. From here, it’s all about making your way through various stages, taking down waves of enemies which come forth from either side of the screen. The way you dispatch fools is by moving the cursor over your victim and clicking, then clicking some more.

Click enough times and you’ll move onto the next wave, collecting either clothing items needed to boost your stats and last longer or energy orbs which let you invest in said stats. As a ‘clicker’ game, Chicken Assassin: Reloaded will only appeal to a certain time of player. Those looking for an instant feeling of gratification. For me, however, the further I progressed and the more I customised my Mean McAllister loadout, the hollower each victory felt. 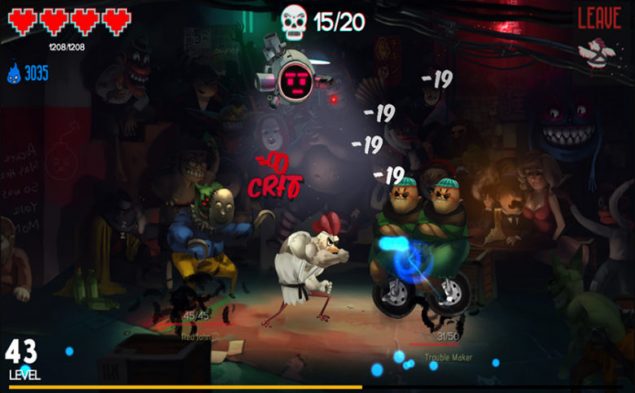 I can’t help but feel that this problem would be solved if Chicken Assassin: Reloaded asked a little bit more of you rather than just clicking. Mad for a clicker game, I know, but why not give me the ability to defend myself from attack? This would help give stages a little more depth and feel fairer. As they are now, though, it all boils down to how long you can last and how many hits you can take. If you’ve upgraded your HP enough or have boosted attack power, you’ll last longer. It’s rather like plastering a gaping wound that’s constantly bleeding, rather than sewing it up proper.

All this isn’t to say that Chicken Assassin: Reloaded doesn’t do what it wants to do well. Again, it’s all about that initial expectation. Even still, as a clicker, playing on the Nintendo Switch sees the challenge significantly upped compared to the PC or mobile version, as dragging the cursor from side-to-side is only as fast as the speed your thumb can move. In this sense, it’s not an ideal version despite the charismatic character designs, tongue and cheek story, or customisation depth.

Chicken Assassin: Reloaded is a crime against Action-RPGs but a godsend to the clicker genre. It’ll serve those who are into this type of game well, but even extensive customisation load outs won’t help it appeal to everyone else.