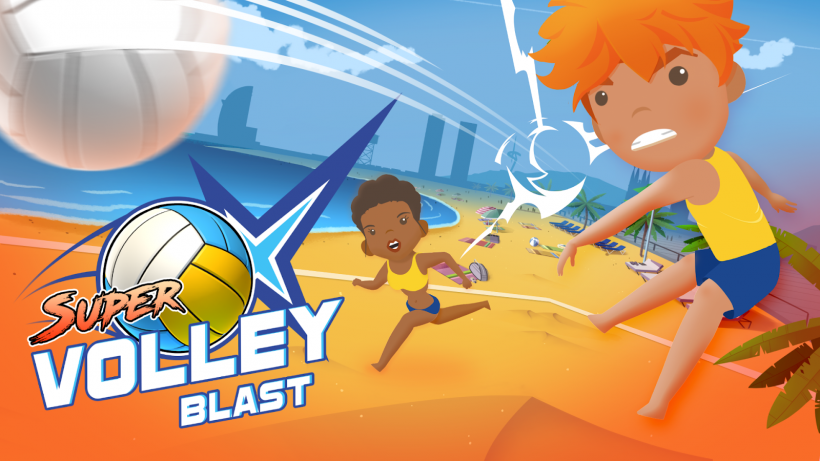 Fancy a game of light-hearted volleyball with a political leader? Well, you’re certainly a niche audience, but you’re in luck. Spy Chameleon developer Unfinished Pixel are back on the Switch with their second game, this time tackling volleyball in a light-hearted and accessible way, fit for couch competition.

Super Volley Blast is a simple, cartoony volleyball game that operates on a 2D plain. Facing off against different teams of two in a plethora of international courts, gameplay is extremely simplistic, comprising of just movement and then the four face buttons for passing, jumping, lobbing and hitting. This makes it accessible and intuitive for the drop-in/out party scenario, but it also makes it pretty shallow and quickly boring, especially in the single player. If you compare it to a game like Mario Tennis: Aces, for example, the lack of combos and strategy on-court is apparent.

Despite the two-dimensional play on-court, jumping out you’ll find a character customisation system that’s surprising deep, capturing the same joy that the Mii Maker did on the Wii, with all its weird and wonderful creations shared online. Allowing you to save multiple vastly different characters and import them into the different modes gives the game personality, and the devs have had fun by putting a whole cavalcade of unlockable famous opponents into the story mode to get you started. The cast includes ‘Spoon Good & Mob Barley’ (Snoop Dogg & Bob Marley) and even variations of Trump and Kim Jong-un. Whilst the extent of my creativity was giving my character a big blue beard, it’s a tool-set that I found myself fooling around and laughing with for quite some time, and the single player acts as a training ground whilst giving you an extravagant roster to show your friends in competitive play.

While all modes are available as single player experiences, Super Volley Blast is best played multiplayer, as it ends up being a bit of a lonely affair solo. Playing with a bot throughout the story mode can often be frustrating; to their credit they do try to set you up for attacks constantly, but they also knock their fair share of balls out of play, and sometimes just ignore an incoming ball altogether. I’m really not blaming my lack of ability on the CPU!

The 2D, side-on view can also be problematic when playing, as it’s sometimes unclear where the ball is going to land. The red line indicating where the ball is falling sometimes doesn’t work properly, and I found myself punching the air a fair few times when jumping up for a strike.

Overall, single player in Super Volley Blast is a pretty bland and repetitive experience, and some combos or more developed core-gameplay would have been helpful here in stopping the game from getting old fast. That being said, if you can get some mates together for a tournament and create some goofy avatar counterparts, it’s good, if albeit surface-level couch fun.

Its single player may be repetitive, but as a local multiplayer game, Super Volley Blast is accessible sports fun with a surprisingly deep character customisation system, utilised hilariously by the developer. If only the actual gameplay had the same depth.