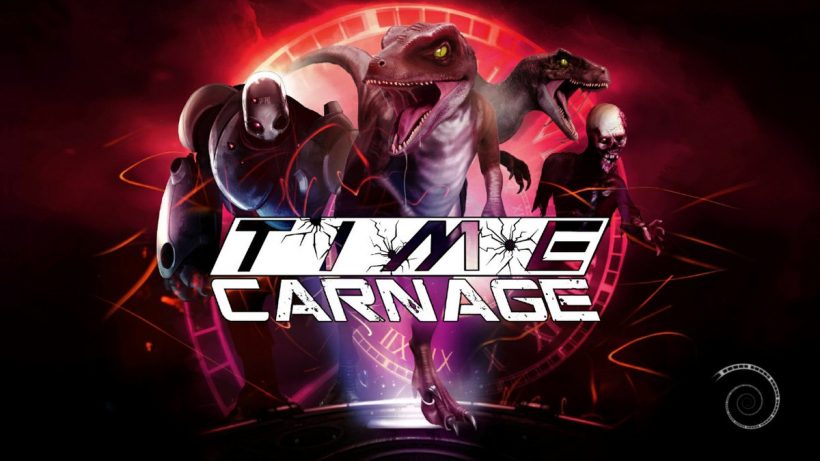 Lots of carnage, not quite so much time

Wales Interactive have been hard at work on Switch titles since the console has been out, with a big chunk of its library now available to pick up on the eShop. This latest title, Time Carnage, previously saw a release on other consoles as a VR game, but of course that functionality is a bit beyond the Switch at the moment.

What we get instead is a simple arcade-type shooter, set across different time periods which change the assortment of enemies you’ll need to shoot down. Time Carnage is presented in the first person but you won’t be able to run around and evade enemies – you’re locked within a virtual shield, and all of the enemies bear down on you in waves and hordes with the aim of doing damage to your shield. Lose all your shield and health points, and you’re done for, though a checkpoint system does stop this difficult shooter from being never-ending.

And it certainly is a difficult shooter. You start off with just a pistol at your disposal, and as you progress you unlock more weapons, though you can only take a selection of four into battle with you at once. These weapons are all placed on their own pedestals within the shield next to you, and like you’d do inside a real-life arcade, you need to lift each weapon out of its pedestal to start shooting. As per any shooter game, some weapons do more damage than others, but the potency of striking your target is more likely to be with weapons with smaller ammunition clips.

This is where the resource management element of Time Carnage comes into play. You can wield two of these weapons at any one time; one in each hand. You can alter the layout of your weapons before you start a level, which adds another tactical aspect as you can hold the two weapons to your left only in your left hand and vice versa. You can’t simply switch between all of the weapons in both hands once a level begins, so you might want to put the two high-damage weapons to your left and the two high-ammo guns to the right.

There is no reload button – you can only “charge up” your weapons by dropping them onto their pedestals to recharge as you switch to the alternative weapon assigned to that hand. For that reason, you can’t afford to simply watch the enemies coming in towards you, you need to be aware of your ammo in both guns, and reload each one perfectly when the time is right. Most will be used to simply reloading both weapons at the same time, but having to think of both hands individually is tough.

Tough is what the game is. While by no means a graphical marvel, it’s so easy to get overawed that it can become frustrating – mastering the weapon switches is the key. It’s a game that’s likely to be popular with those that sort of feeling where all your success is totally down to the player – and the game certainly doesn’t help, with a wayward reticle you can rarely hone in on an enemy when you need it, even with the focus button pressed.

Do send in your screenshots if you complete this one –  we at Switch Player Magazine will be mighty impressed.

Time Carnage is tough, but has some irritatingly unprecise controls. It’s certainly an enjoyable arcade shooter though.