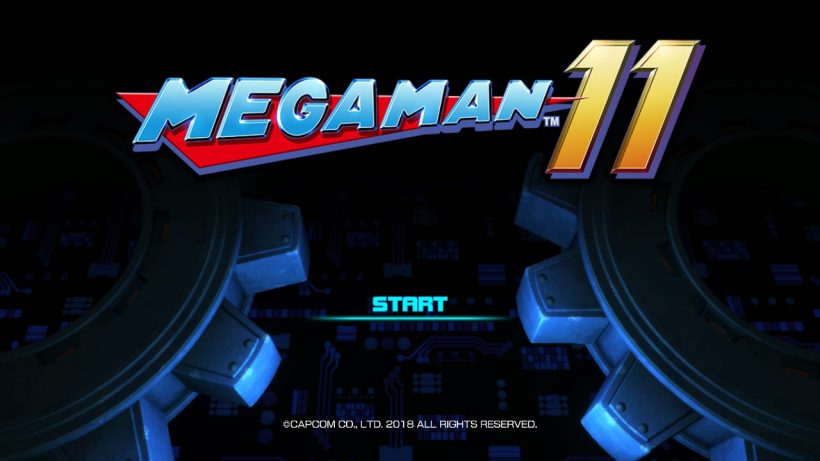 Switch owners have been treated to an avalanche of Mega Man titles in 2018. Every mainline game from the classic Mega Man series and its spin-off Mega Man X are available via four Legacy Collections, bringing the total game count to a staggering 18, all launched within just a few months of one another. Celebrating the franchise’s 30th anniversary, it culminates to the release of a brand new title in the classic series: Mega Man 11. Ditching the retro style employed in the last couple of games, Mega Man 11 is an admirable attempt to bring the series into the modern era. It mostly succeeds, giving fans of the Blue Bomber a game they can be proud of, but not without a few glaring issues.

What’s immediately noticeable upon booting up the game is that Capcom have actually taken the time to flesh out some semblance of plot for the game, providing some backstory for the characters of Dr. Light and the evil Dr. Wily. It’s by no means a particularly deep or interesting story by any stretch of the imagination, but it at least gives a bit of context into Dr. Wily’s motivations and the origins of the Robot Masters. On the flip side, the voice acting in the game is hit and miss, with certain characters coming off overly cheesy, even for a Mega Man title. Still, it’s probably what fans come to expect at this point.

Much like classic Mega Man games, you’ll start off within a stage select screen, and you can tackle the Robot Masters in any order you see fit. If you’ve played the demo, you’ll no doubt be tempted to start off with Block Man’s stage before moving onto the others, but keep in mind, this is probably the easiest stage of the lot by a fair margin. Mega Man 11 is no pushover, and if you play on normal or superhero (good luck) difficulty, you’ll end up dying an awful lot. For die-hard fans, this is great news, and I personally relished the challenged, but for more casual players, there are easier difficulties available for you to tackle if you wish.

A brand new feature to the game is the Double Gear system. Playing a central role in the game’s plot as well as its gameplay, the Double Gear system grants Mega Man with the ability to either power up his weapons to devastating effect, or slow down time dramatically to easily dodge incoming enemy attacks. You can activate either power at any time, but keep in mind that if you use either of them for too long, they’ll overcharge and it’ll be a good few moments before you can use it again. It’s a neat addition to the series overall, but it does fundamentally change the gameplay which many purists might not appreciate too much. Yes, it may be possible to disregard its inclusion entirely, if you wish, but a lot of the level design makes its usage almost mandatory.

Otherwise, everything that Mega Man fans have come to expect is present and accounted for. You can run, jump and slide throughout the environment, and it feels incredibly slick, with the game running at a super smooth 60FPS throughout. Dr. Light’s lab returns from the later Mega Man games, allowing you to purchase handy items to assist you if you’re struggling.

Many familiar enemies also make a welcome return, and the levels themselves are littered with brutal traps, including deadly electric shocks, drills shooting across the screen, and of course the familiar spikes lining the walls, ceilings and floors. As for the Robot Masters, they all provide a unique challenge and you’ll need to utilise both your own skills and the Double Gear system to overcome them. Finally, adorable sidekick Rush is back to assist Mega Man, and you can conveniently request his appearance with a simple tap of X.

Outside the main game, there is a significantly meaty Challenge Mode to tackle, which takes various scenarios from the levels and alters them to provide specific challenges. It’s a decent addition for players who might breeze through the main game, and chasing high scores vastly improves the game’s otherwise modest length. Additionally, whilst we all know the Switch doesn’t feature an achievement system (come ON, Nintendo!), Mega Man 11 features its own achievements. By completing various objectives from simply beating a level to killing a certain number of enemies, you unlock achievements which can in turn unlock new entries in the game’s Gallery, which is reasonably extensive in itself.

Visually, Mega Man 11 is a bit of a mixed bag. Taking on a new 2.5D aesthetic, it clearly more technically impressive than past entries, displaying bright, vibrant colours and stunning backgrounds, but some aspects are a bit of a disappointment. Don’t worry, it’s nothing anywhere near the disaster of Mighty No. 9, but Mega Man’s running animation in particular looks stiff (almost like he needs a quick dash to the toilet) and the visual design of the Robot Masters is a bit hit and miss. Otherwise, there’s little to complain about: the level design is impressive throughout, the weapon effects are suitably devastating, and I personally really appreciated how Mega Man’s costume changes when equipping the different Robot Master weapons.

Sadly however, whilst the visuals mostly impress, the same cannot be said for the game’s soundtrack. The Mega Man franchise has always been known for its iconic music, including Wily’s Castle from Mega Man 2 and Galaxy Man from Mega Man 9. Unfortunately, the music in the new game is no where near as memorable, and I’d go so far as to say that some of the tracks are actually quite poor.

Mega Man 11 is a mostly triumphant return for the Blue Bomber, featuring the same classic gameplay that veterans will appreciate, whilst introducing the neat Double Gear system to assist newcomers to the franchise. Hiccups in the graphics and soundtrack departments hold it back from being a true modern classic, but it’s a great new addition to the series, and hopefully a solid foundation for the future of the series.

Mega Man 11 is a brilliant return to the series after a painfully lengthy break. Visual and audio mishaps aside, it introduces an engaging new gameplay mechanic whilst staying true to the core formula that fans of the series come to expect.