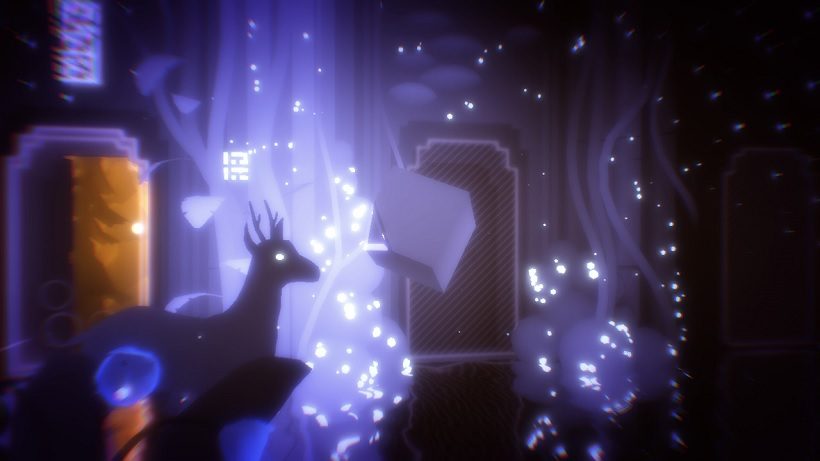 I Kenshō you a world of pure imagination…

Having played numerous disappointing indie puzzle games on the Switch of late, I was reluctant to pick up another, but after seeing the promotional images and trailers for FIFTYTWO’s Kenshō, I just couldn’t deny myself the opportunity to try it.

Deceptively simple, Kenshō is all about matching blocks of the same colour in lines of three or more, thus removing them from the playable area. Your goal is to collect various different “keys” from these blocks, which you then use to unlock the next door and progress with both the game’s narrative and to the next level. Special blocks make your task even more difficult, requiring particular conditions to be met before releasing their precious key segments, but as it is up to you to restore the balance of nature in this surreal world where nature, time and space intertwine, failure is not an option.

The visual aesthetic of Kenshō is what primarily drew me in, with its vibrant colours, energetic animations and innovative menu and level designs offering me something much more involving and impressive than any puzzle game I had seen or played before. With a core narrative of world-needs-saving proportions driving each stage of the game, the sidescrolling menu constantly adapts and changes to suit the tone of the game at the current moment, and with each playable level having its own unique background setting that is carefully designed and stylised as well, Kenshō is – simply put – stunning to look at.

But that’s not all. The game’s soundtrack, entirely composed by Oscar Rydelius, is advertised as award-winning – and rightfully so. Each piece of music is sublime, with live instruments having been used in the production process, and you can really tell that every arrangement and sound effect used throughout the game was lovingly-crafted for maximum enjoyment. No piece of music is too jarring or too pressuring, and it is no wonder that when starting the game up for the first time, you are recommended to use headphones or earphones while playing, as these make the auditory experience even more beautiful.

Perhaps the greatest thing about Kenshō for me is that it is a puzzle game without punishment. There are no time limits, and if you fail a level, or if you obtain half of the keys and then screw up, you aren’t forced to start all over again – you simply continue from the same place, and with all of your progress intact. Some may say that this makes the game too easy, but for me, it made it even more fun. I never felt frustrated or disappointed with myself for making a mistake, and I felt free to put the game down and come back to it at will, with the doors to each level being left invitingly open for me the next time I played.

My only criticisms of Kenshō are that, while playing, there is no simple way to re-try levels or start the game again from scratch, nor is there a traditional menu that you can access to customise any aspect of your experience. While there is no text or language used throughout the game to require any customisation, it would have perhaps been nice to see options for those afflicted with colour-blindness, or the hard-of-hearing.

A captivating puzzler with enchanting visuals and a soothing orchestral soundtrack, Kenshō is a fantastic breath of fresh air. Though its gameplay is simplistic, Kenshō’s tale of restoration and exploration will hook you in and keep you playing until the very end. Just be prepared to give the later levels a fair few tries, as the difficulty curve is one to watch out for.