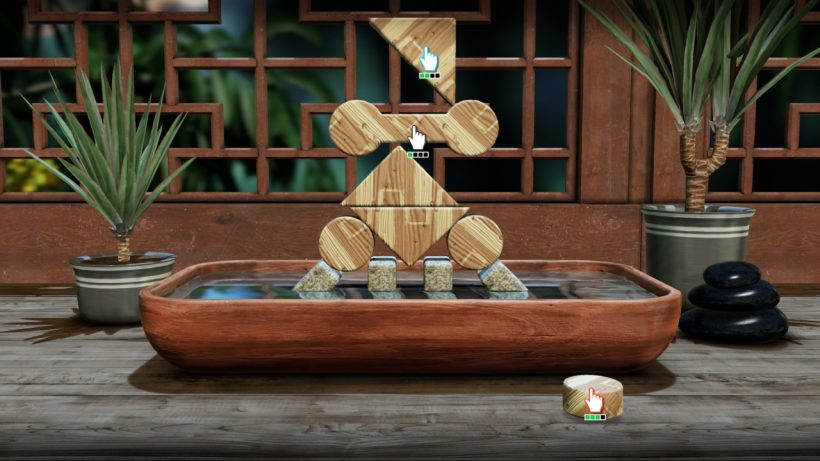 Since Nintendo entered the digital age, there has been one constant across all of its online stores. Art of Balance first came to Nintendo as a WiiWare title, but since then it’s returned on the 3DS eShop and again on the Wii U. This latest arrival indicates that the game must be doing well enough to warrant a new go with the Switch audience.

It’s not exactly the same game, though – developers Shin’en Multimedia, of Fast RMX fame, have now taken the game up to eight worlds and two hundred levels. There’s split-screen, local play and online multiplayer involved too, allowing you to battle against each other in a kind of frantic game of Jenga and hoping not to be the one to let the pressure get to them.

The concept of the game is simple and yet genius all at once. Presented with a bowl of water with a stand of varying shapes in the middle, you have to stack a series of differently shaped blocks in a tower in the bowl paying perfect attention to the balance so the tower doesn’t end up toppling into the water. Just one block falling off is enough to warrant a fail, so the placement of each block is of high importance. In most levels, only some of your total blocks are available to you from the beginning, meaning you’ll have to place blocks in order to have them available, and then with each passing placed block, you’ll need to rethink your strategy.

The formula is mixed up throughout the game’s series of eight worlds. Sometimes you’ll have to plinths in the bowl to place your shapes on, leaving the onus on you to cleverly arrange pieces to balance in between. In later stages this double plinths can act like weighing scales, dropping down with the weight of a shape before rising up again when you start putting blocks on the other tower.

You can’t simply pick up a shape you’ve already placed and move it – you’ll need to begin again from scratch if you want to do that, so the pressure is always on. Some shapes are clear and will either crumble from the weight of the blocks placed on top of them, or self-destruct after a time limit, so you need to plan for where all the other blocks will land in that situation. After all, it would be far too easy if they were to be helpfully shaped to just be placed at the top, wouldn’t it?

Never before has a game managed to be so soothing while creating so much anxiety all at once. Art of Balance really excels in its physicals work – never before has a game managed to make such clever and realistic use of gravity, for a start. There is a slight issue in trying to place blocks side to side and touching each other, which has the effect of an invisible force pushing the blocks apart as soon as you set them and can cause some serious frustration – you need to focus on placing them and allowing gravity to pull them together. That aside, Art of Balance is an engaging, unique puzzler (not taking into account its releases on previous systems, of course). It’s right up there in terms of Switch puzzlers.

Art of Balance is soothing yet infuriating in equal measure. You’ll be compelled to power through and find the perfect balance in each of its levels, though.