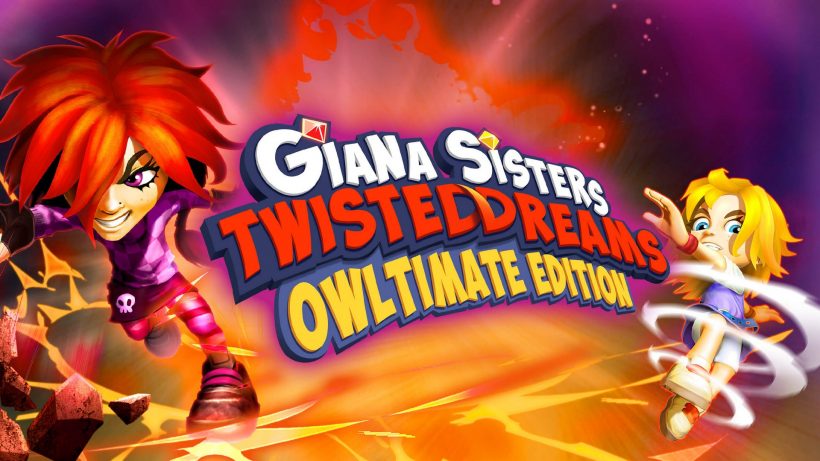 Nothing but sweet dreams.

Giana Sisters: Twisted Dreams Owltimate Edition is an adventure/platforming title that owes its roots to the Commodore 64, this entry is the follow up to The Great Giana Sisters which was released way back in 1987. I’ll confess, I had to do my own research on the original knowing very little but it definitely isn’t needed as the decades that have passed since make this sequel a new game in its own right.

You play as Giana in your quest to rescue your sister Maria who’s been kidnapped by Gurglewocky – he’s that giant dragon you can see below! The game takes place in a dream world which is briefly explained just before you begin your adventure. There are 40 levels on offer plus additional content right from the outset, multiple game modes and collectables and one pretty unique game changing feature; the ability to morph between dreams.

The game is presented in vast 3D landscapes ranging from idyllic beaches swarming with jellyfish to medieval castles home to a few dusty old knights. It’s a real treat for the eyes and you’ll be forgiven for getting distracted by the lush scenery. Giana has somewhat of a split personality though, she has the ability to switch between two different dream worlds and this is one of the most unique features the game has to offer. This changes the entire environment around you, including Giana! One side is filled with giant colourful mushrooms and fluffy clouds and the other is a much harsher and darker environment where everything is withered and decayed. The switch (pardon the pun!) is completely seamless and there’s no disruption in game, you can activate this at any point during by tapping the ZR trigger. It’s really something special and watching a tree transform from a friendly green giant into a menacingly leaf barren monster never gets old.

Whilst in the two different dream worlds Giana has different abilities, one is a spin jump which allows you to pirouette your way safely across larger gaps and the other is a burning fireball that helps you reach higher ground or otherwise inaccessible areas. Both abilities come in handy depending on the situation and you can only use the ability associated with whichever dream state you’re in. As well as changing the scenery and environment your enemies will morph as well, you’ll find doors opening, platforms vanishing and deadly traps appearing right before your eyes in one fluid motion. As you progress across each of the stages you’ll always be coming across new gameplay elements that keep things fresh and exciting such as a gumball machine that gives you the chance to float in a giant bubble, or tiny trampolines that give you immense jumping power.

Each stage has collectable gems and they range from anywhere between 300 to 900 in total which is honestly quite an overwhelming number just for one stage at a time. If you’re out to get every single one it’s really going to test your platforming and sleuthing skills looking for the many hidden areas on offer here. As you progress across the four worlds the difficulty in possessing them all does become significantly harder and you may find yourself short sometimes. This provide a great sense of replayability for all you players out there who go crazy for collectables!

As well as those you’ve also got hidden artwork pieces you can unlock by reaching secret areas and finding a larger cluster of gems in the form of a giant crystal. There’s usually around 5 or 6 of these on one stage, sometimes more, sometimes less but it’s a nice addition to include. Chuck in four differing difficulty levels, two of which are only available through meeting certain conditions, a Score Attack and a Time Attack mode and you’ve got a nicely rounded package that will keep you coming back for months.

In order to unlock the Time Attack and Score Attack modes you have to complete each level on the Hard difficulty setting and this will then unlock each level within that mode. To unlock Hardcore difficulty you have to earn 4 stars on each of the end of world bosses and to unlock Uber Hardcore mode you have to beat every level in Hardcore difficulty. If you want to get every last penny out of this game, there’s absolutely gallons of content to uncover and explore and it’s clear the developers, Black Forest Games, have put a lot of thought into each aspect of Twisted Dreams.

The theme throughout your time in the dream world is very cohesive, you’re in a fantasy land and the attention to detail is most apparent when switching between the two dream states. Even the smallest details are incorporated, ornate fountains become dilapidated and filled with green toxicity, old tree’s become fossilised dinosaur skeletons and portraits depicting royalty become hideous monsters. The way they incorporate the music is very clever, when switching between dream states you’ll notice there’s a heavy rock undertone brought in with guitars and on the flip side you’ll get a very soft, generic fairytale sounding instrumental.

At the core of this game, you’ll find a deeply rewarding platformer with bucketfuls of charm and content to enjoy. It has a gradual learning curve and will provide a good challenge in parts for even seasoned experts, the music is a joy to listen to and watching the world transform before your very eyes never gets old. Each new area you discover gives you new sights to look at and new ways to play and if you want to see everything the game has to offer, unlocking every mode available and collecting all the gems will keep you playing for months. In this package you’ve also got 5 additional levels themed around Christmas and Halloween, a perfect October purchase I’d say!

Giana SIsters: Twisted Dreams is a fantastic platformer that will keep you on your toes, with multiple modes to unlock, hidden gems and artwork plus additional themed levels you’ve got the best package in the Owltimate Edition.