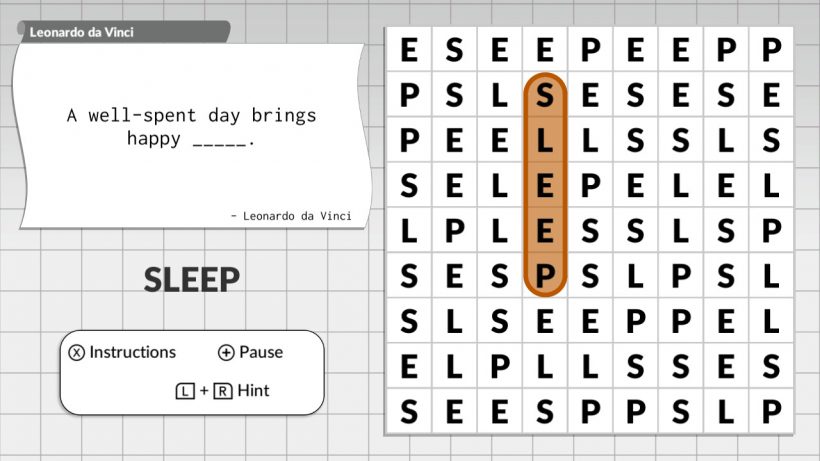 POWGI sure has a lot of words

The Brain Training generation of the DS and the Wii popularised the newspaper puzzle sections as a video game genre, and since then we’ve had countless offerings across the Nintendo systems. The latest installment is the Switch version of a title already released on both the eShops of the Wii U and the 3DS. Word Puzzles by POWGI offers a bit more variation than your typical word search book that you might find in your local newsagent, offering six different activities all centred around your word knowledge and brain power.

The first offering, Word Maze, has you tracking words all centred on a theme in order across the wordsearch grid. So, if you were looking for colours, you’d spell out R-E-D, and then look for a neighbouring letter to commence the next word. Fail to get the sequence correct and you’ll usually not be able to fill out the board to completion.

One Word is the next game offering. This presents you with a traditional wordsearch grid, and it’s just the one word that you’ll need to find. The challenge comes in that every letter on the board is one of the letters in the correct word. You’re given a clue, with a blank word with a set number of letters as part of a sentence at least giving you a chance at knowing how many letters the target word has. This is a challenge, particularly when the sentence is almost entirely blanked out, but you can at least press the L and R buttons together to reveal the word it is you’re looking for.

Game number three is Circles, which presents you with three intersected circles filled with letters. One letter in the middle is replaced by a question mark, and you’ll need to figure out what it is (it completes words in all three circles), then unscramble the word. This is probably the most difficult game to get into and therefore the weakest of the bunch.

Mixups has you picking letter tiles to create words centred on a certain theme, from shapes to colours – nothing too exciting in this one. Flowers is one of the better games, giving you tiles of two letters which you have to place on the petals of a flower which has another two letters stuck to the middle, basically creating a series of six-letter words as the solution. Of all the games in the package, this is the most moreish. Finally, Crossovers presents crossword puzzles with just the one letter missing.

Word Puzzles by POWGI never needed to be awash with pretty visuals, and the presentation is for sure simplistic. You have a 2D dog passing comments as you play through the puzzles, but apart from that, the game is entirely about the brainpower. What should be noted is that the controls, particularly for Flowers, can be awkward when played with a controller due to having to select two different things with the control sticks and the ABXY buttons. Of course, a puzzle game of this type is much better suited to being played in your hands or right in front of you on a table, so the likelihood is that most won’t encounter this issue. But as a whole it’s a standard word puzzle fare, offering some simple car journey material.

Word Puzzles by POWGI is for the grandmas and grandads out there, and even the mums and dads too. Chances are the more youthful won’t be going anywhere near it, but it’s an easy time waster.