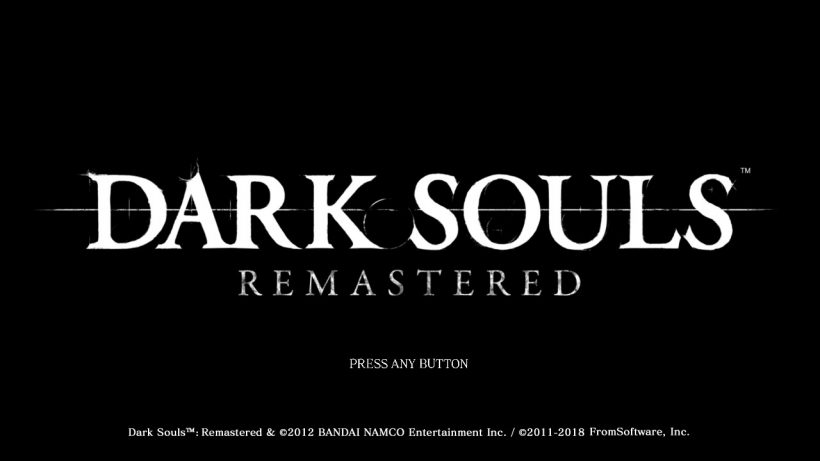 When Dark Souls was first released back in 2011, it was hard to imagine that it would become such an important and influential title. Sure, there was already a small community waiting for the spiritual successor of the 2009 cult title Demon’s Souls, but it was with the first Dark Souls that FromSoftware really managed to elevate their game design philosophy to another level, creating a truly fantastic world to be explored. Now, after what seemed to be a very long wait due to an annoying delay, we can play the Remastered version of the best game in the series on the go.

Before facing the many challenges that wait for you in the land of Lordran, you’ll be presented to an ominous CG introduction that kicks in when you start your first playthrough. If you’re a veteran Dark Souls player, you probably watched this sequence many times. If you’re a newcomer, though, you may want to pay close attention. The talk about the concepts of souls, lords and darkness may all sound a bit nonsense, but this is one of the rare moments where the game tells you about its world and lore in an explicit way.

This doesn’t mean that Dark Souls lacks when it comes to the narrative department. On the contrary, it has a deep and extensive lore that gives life to its well-constructed dark fantasy world. However, Dark Souls chooses to tell its narrative in an unusual and obtuse way. In order to piece together the most obscure details about its narrative, you’ll have to do things like reading carefully through item descriptions or paying attention to details on the environment itself. The result is a game that has many secrets to be discovered, but only the most curious player will dare to uncover them all. Consequently, you can have zero interested on Dark Souls’ narrative and have equal enjoyment of its mechanical elements alone.

On this matter, the fact that Dark Souls can hold itself entirely on its gameplay aspects tells a lot about the superb job done by FromSoftware. Despite being a title from the last generation of consoles, Dark Souls’ level design is unparalleled to this day. The kingdom of Lordran branches into many different interconnected areas. While there is a path more suited to your initial level and gear, you’re pretty much free to explore the world as you want. The game never holds the hand of the player, but it’s surprisingly satisfying to explore a challenging segment and discover a welcoming shortcut to one of the previous areas. Even with no map to help you, the world of Dark Souls’ feels like a cohesive and expansive place – a menacing place that gets more familiar as you start to learn about the many dangers that lurks within. 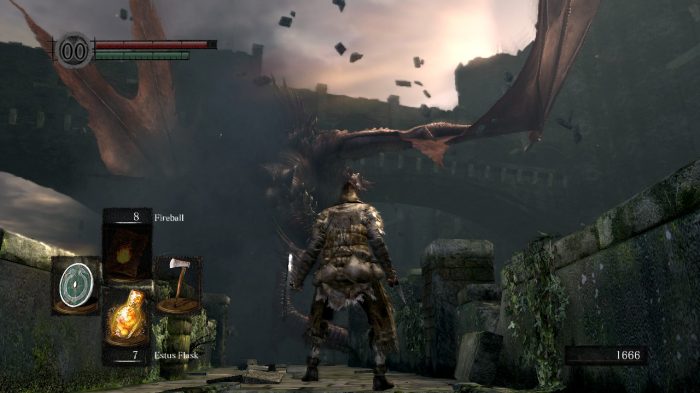 Dark Souls’ world is full of dangers at every corner. Dragons included.

While these dangers can be represented by the environment itself at times (with bottomless pits, traps and hazards at every corner), the many enemies that populate each region will be your most common threat. Fortunately, in order to deal with them, you have a very flexible and robust combat system. Your character’s arms are mapped to the shoulder buttons. So, if you choose to play in a more standard knight-like style, L allows you to hold your shield, ZL to parry, R to perform a light attack, and ZR the heavy attack. It is also important to learn when to roll with A, a movement that gives you some invincibility frames to evade the most powerful attacks. With this basic set of movements, Dark Souls adds a lot of depth to its combat thanks to two additional factors: the stamina bar and your current build.

Some actions you perform in the game, be it an attack, a jump or a roll, will eat part of your stamina. When you’re idle though, it will naturally recover at a certain speed. How much stamina you spend depends on your gear. Consequently, using a heavier weapon or rolling with a bulky armor will put limits to how many attacks or evasions you’ll be able to perform. As a result, the combat in Dark Souls is much more methodical than in other action adventure games, because even some of the most simple enemies may demand you to watch carefully for the timing of their attacks, while you manage your stamina bar. 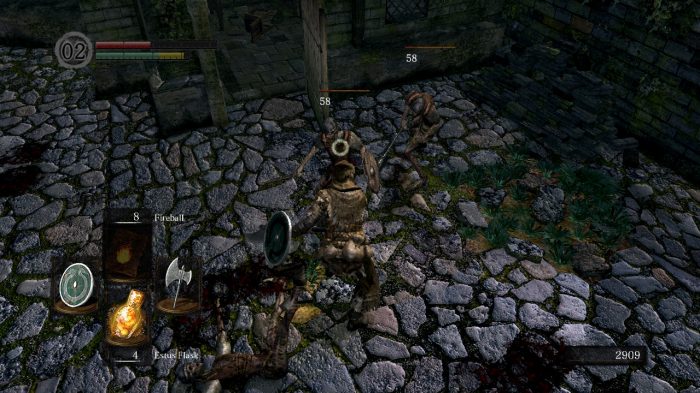 The combat feels like a dance, as you circle around your enemies waiting for more stamina.

Due to its slower-paced combat, there’s a lot of talking about how hard Dark Souls can be. Most players may come across difficult spikes on certain areas or bosses, depending on their play style. Nevertheless, in general, Dark Souls is a game that does a good job in providing a challenging, but extremely rewarding experience, without becoming too frustrating or rage-inducing. This is specially true when you start to explore the many ways to deal with each situation or enemy.

Dark Souls has a huge number of armors and weapons to be wielded. The most surprisingly aspect is that pretty much every single build you can imagine is viable, as long as you learn to use them properly. Do you want to smash your enemies with a giant club, wearing an armor thick as a wall? Want to be a nimble assassin, one-hit killing everyone with a knife? Or maybe a wizard ripping everyone with mighty bolts? That’s all doable. It’s just a matter of adapting to each weapon’s speed and move set, and leveling up your character properly. 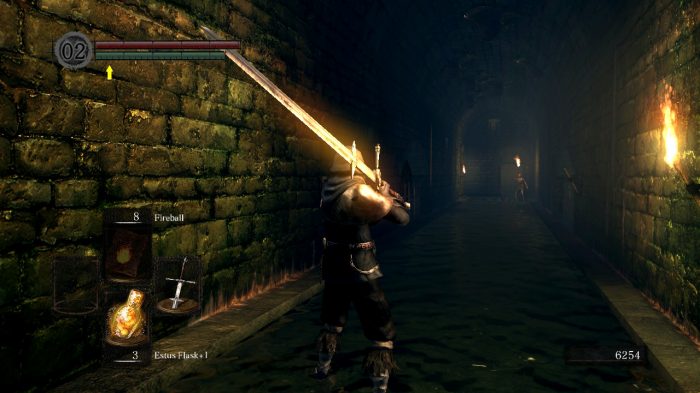 You can choose to be a heavy-hitter, a fast ninja or a wizard. Everything is viable.

Just like most RPG games, Dark Souls has a robust leveling system, in which you spend your souls (a currency you earn by defeating enemies) to increase your values on specific attributes like strength, endurance, faith and more. Each status will not only make you stronger on certain aspects, but also are prerequisite for certain weapons and spells – hence the importance of leveling up ‘correctly’. Connected to the souls system you’ll also find one of the most punishing aspects of the game. If you die, you’ll temporally lose all the souls in your possession. In order to recover them, you’ll need to go back to the place where you died to retrieve them. If you die again, though, it’s gone forever.

Dark Souls also has a unique approach to how its multiplayer works – both on its co-op and competitive modes. From the very beginning, you’ll be able to find messages that other players can put all over the world, be it jokes or helpful tips. Similarly, once you’ve met a certain criteria, you’re be allowed to find summon signs that allows you to summon NPCs or other players. This way, you can get help for some more demanding bosses. However, as soon as you’re able to summon friends, you’re also opened to invasions from hostile enemies, that can drop in your game as red phantoms, whose only objective is to defeat you. 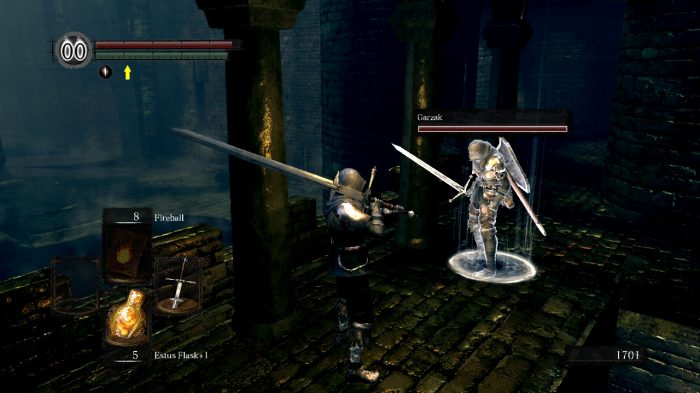 You can get aid from friends to defeat the most formidable foes.

Multiplayer has been considered improved on this Remastered version, and now allows up to 6 players simultaneously (it was 4 before). Other welcoming upgrades can be seen in the steady frame rate of 30fps on the Switch version. The original Dark Souls had some serious performance issues, where places like the infamous Blighttown were plagued with some serious frame rate drops. Being a Remastered, not a remake, means that this version still has some of the rough edges here and there, like collision bugs and some less inspired areas – yes, Lost Isalith, I’m talking about you. It also has some oddities on Switch, because the menus inside the game use B to select and A to cancel. This doesn’t take away the shine from this rough gem, though.

When you consider all of its aspects, the original Dark Souls was one of the most influential games from its time, and it is a worthwhile title to be played up to this day. This Remastered version takes everything that made that game an unparalleled experience, and improved on some of its more problematic drawbacks. With the inclusion of the amazing DLC Artorias of the Abyss, this can be seen as a definitive edition of a game that you’d die to play.

Dark Souls: Remastered is the improved version of one of the most influential and unforgettable games ever made. It delivers a mysterious and expansive world to be explored, which will reward with many wonders those who brave enough to face its dangers.