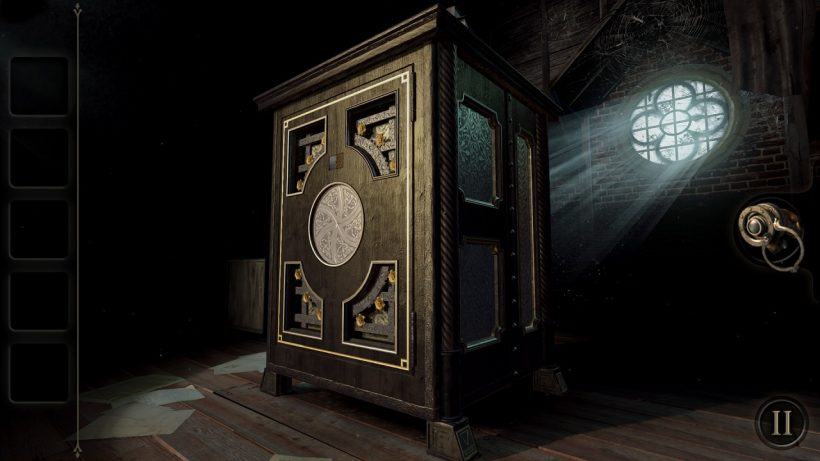 One of mobile gaming’s major success stories now has the perfect system on which to make the jump over to consoles for the very first time.

The focus in The Room – originally a 2012 iOS game which is under no circumstances to be confused with the 2003 film of the same name – is not on the room itself, but instead a treasure box of sorts, covered in all sorts of puzzle contraptions which open compartments. The sense of cracking a code and the level of achievement therewith is achieved quite smartly here – the game is split into levels, and you’ll see the makings of each of that level’s puzzles in their formative stages as you go, before they start to make sense later. Things like keyholes, missing cog gear slots and holes which are just begging for a shape to be placed in them are a sure sign of puzzles to come.

And the puzzles the game offers are varied, despite the compact premise of everything being centred on the puzzle box. What The Room does very well is its feel of authenticity, with none of the puzzles too outlandish that you feel they wouldn’t feature on a real treasure box. A looking glass contraption allows for a UV light effect, allowing you to see puzzle hints like fingerprints and other written clues. Otherwise, it’s easy to figure out what’s needed to be done in order to solve puzzles, it’s just a case of scouring the treasure box to find where the solution is hidden away. You’ll be taking on slider puzzles, guiding balls through mazes by rotating the circles which comprise them, and even at times peering through materials using the looking glass to pick up hints and solutions.

While The Room is all about the brain work, you’ll never find yourself having difficulty to the point of being stuck. The game does let you fiddle around with puzzles for a while before the explicit option of using a hint appears, but even without using them you’re looking at a run time of a few hours.

The premise is simple, but the developers are to be lauded for making the effort to fill in a backstory of how the puzzle box came to be – with notes written by its creator to be found throughout the puzzles, the game is given a distinct level of depth that sets it apart from other mobile titles of its kind.

It’s clear that the Switch’s capabilities made it the ideal console for The Room’s console debut. There’s no traditional controller functionality here – on starting the game, you can choose between using the touch screen or using a Joy-Con. The touch screen was the more intuitive option if simply due to the accuracy of control, being able to quickly rotate the treasure box when needed and to pull sliders and flick levers with ease. It’s therefore a great title to pick up and take on the go with you as a means of showing what the Switch can do.

The main drawback is the short run time and the compact feel, leaving the player wanting more. At £7, you can’t complain about that much, but in an ideal world, The Room’s sequels should be part of this maiden Switch iteration.

The Room offers intuitive and thoughtful puzzling, but leaves you wanting more. It would be great to see it bundled with its sequels in the future.