With the long-awaited Valkyria Chronicles 4 launching day-and-date on the Nintendo Switch alongside other platforms, it was surely only a matter of time before this missing link was filled. Originally released for PS3 in 2008, the first Valkyria Chronicles has garnered a reputation as being one of those video game classics that’s oft-talked about – whether for its unique mix of turn-based strategy and real-time action, or its admittedly beautiful sketched art style. I’m pleased to report that both these factors and more remain successfully intact for the Nintendo Switch version: the first time this original entry is able to be played on the go. Compared to its big brother sequel that launched back in September, Valkyria Chronicles is a much leaner, more stripped back affair. Placing you in the role of Velkin, a tactical commander pulled into the position during the midst of all-out war, you’ll command the tightly-knit characters making up Squad 7 in a bid to prevent the menacingly cruel Empire from taking over. Despite such potentially heavy subject matter, Valkyria Chronicles does an excellent job at reminding you about the peace you and your comrades are fighting for. Whether it’s in the way a squad member will forlornly look upon a ruined monastery or the way Velkin himself will become excited after seeing a new variety of plant – the necessity of your war-time actions are never glorified and so make for a surprisingly heartfelt story of good vs evil.

Into the game proper, and turn-based battles forgo the tile-based grid system some strategy games opt for in place of real-time movement based around Action Points or ‘AP’. Each skirmish begins with you deploying your selection squad of soldiers, tasked with gaining the advantage over enemy troops using the five types of infantry: Scout, Shocktrooper, Sniper, Lancer, Engineer. All differ in terms of movement ability, type of weapon, and ability, in what works out like a sort of Rock, Paper, Scissors system of strengths and weaknesses. Lancers have slow movement ability, for example, but do really large attack damage – especially when taking down tanks. Further aiding this tactical approach is a top-down perspective of the battlefield, which can be accessed at any time. Through this you can pre-empt from what approach and which angle makes the most sense for you to rally the troops, switching into third-person to decimate them accordingly. 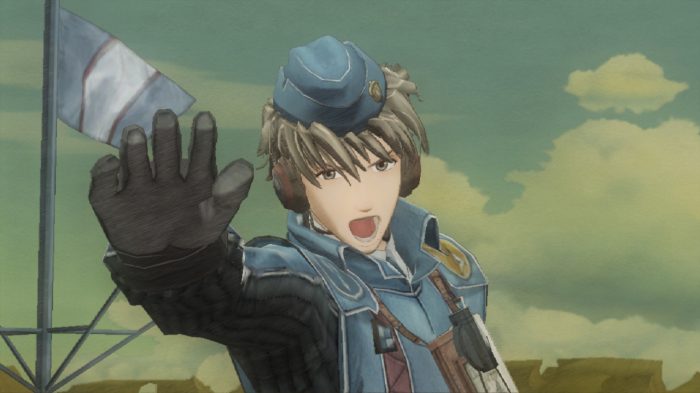 Despite Valkyria Chronicles spreading itself across 18 chapters, the number of story-driven battles is what I would call sensible and always manage to deliver teeth-clenching moments. This is because you’ll receive a rating at the end of each battle depending on turns taken, troops lost, time used… Being conscious of this means you’ll more often than not take a calm and calculated approach, with Valkyria Chronicles rewarding those who take their time with XP and the ability to develop even more powerful weapons with improved accuracy and damage. Objectives can vary from defeating all enemies on the battlefield to occupying the enemy outpost – either way, being tactical will always triumph over going in true ‘gung-ho’ fashion.

Valkyria Chronicles is one of those games that is just a joy to watch, play, and engage with. Its characters are delightful, the world beautifully well-realised, and though there is some quite cringe-worthy dialogue, manages to get you to thing differently about turn-based warfare thanks to its welcome mix of real-time and strategy. On Nintendo Switch it looks absolutely gorgeous too, to the point that you’d never know it was the port of a 10 year old game.

The spark that made the original Valkyria Chronicles shine bright on other platforms still shines bright on Switch, in a game that is beautiful, rewarding, and timeless in its take on turn-based strategy.