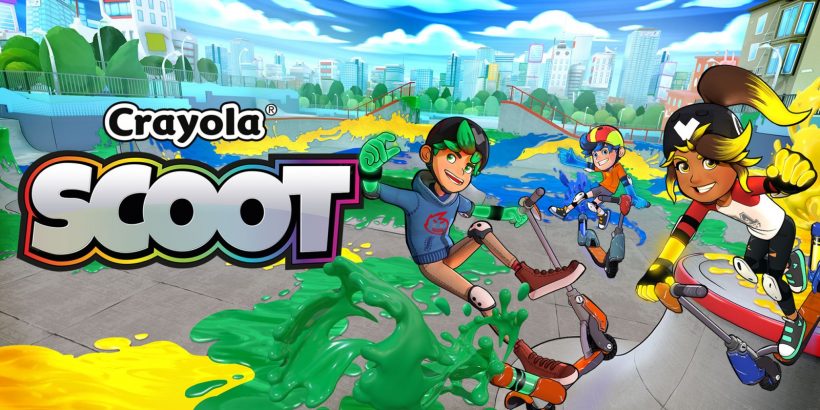 Scoot for the stars.

Remember the Tony Hawk’s Pro Skater games? Crayola Scoot is along the same lines, except it’s about scooters. Oh – and you’ll be painting as well.

You can create your own character and give them a name from the get-go. Once you’ve got the tutorial out of the way, you’re left to your own devices in the main hub area. From here you can purchase new items, practice specific tricks in the air tank, embark on the single player campaign and go for a free scoot.

The game mixes bike sports gameplay with competitive painting, with tricks enabling you to fire off more paint. It’s definitely not the easiest control system to master in terms of accessibility. It’s all about well-timed grinds, boosts and tricks, and while complicated at first, after a couple of hours things do become a lot easier, especially after learning the maps.

The single-player campaign is made up of three different areas and each one provides a steady stream of challenges. Each has different objectives and you’ll always be playing against or paired with CPU characters. The end goal is always the same: reach first place, through aiming for a high score or painting the town purple. Each map is varied and lasts around two minutes, so gameplay doesn’t feel stale after your fifth time trying a challenge on the hardest difficulty. With such variety from game to game, getting a perfect three gold stars on each stage on every difficulty is a worthy accomplishment.

Bonus experience is awarded in levels, for example for getting the most air time or the most turf inked, then others include having the least amount of crashes. As the experience builds, you get the chance to face off against legendary scooter champs!

In order to beat them you’ll have to out-combo them in a game of point scoring madness. You take it in turns to set the score for each round, depending on who won the previous one, and then string together grinds, boosts and tricks to accumulate the biggest combo. If your opponent beats you on their go, then it’s back to you until someone either gets a lower score or stacks it. You do only get ten seconds, so it’s a lot harder than it sounds and the aim is to make your opponent spell out the word ‘SCOOT’ – one letter is awarded to the losing player upon each round.

Tricks are done with a combination of the right stick in a specific directional input and jumping out of the ramps to get your air time with the left stick. A boost meter in the bottom right of the screen is filled up by performing tricks or riding over your own paint colour, and when full is an easier method to get more air time than the charged jump.

There is local multiplayer supported for up to four players, but it’s not easy to jump straight into. With a group of friends, though, it’s a good bit of fun. Every mode that you play in the single player campaign is available in multiplayer.

Crayola Scoot is a fun title and well-rounded package. The control system can be confusing at first, but becomes easier with time. With a single-player campaign and multiplayer to take in, it should have your attention for a while.